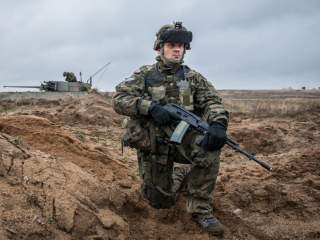 As expected, the Russian government has reacted to U.S. plans to quadruple its planned military spending. The spending increase, announced this week, is intended to support greater U.S. deployments in eastern and central Europe by expanding the equipment stationed there and by rotating American troops in order to maintain, at any given point, the equivalent of a full armored combat brigade in the area. Moscow’s response is to suggest that Washington is violating the spirit of the NATO-Russia Act, which was meant to reassure Moscow that there would be no permanent basing of U.S. forces in the former Soviet bloc. Moscow also suggests that the military increase is destabilizing overall European security by returning to a more Cold War–style posture. Beyond the diplomatic complaints, however, what will the Putin administration do?

One question is whether the U.S. announcement will become front and center in a new domestic political campaign, one suggesting that Russia faces hostile encirclement from the West. By this logic, planned slowdowns (or cuts) in Russian defense procurement, due to the crises that arose from sanctions and falls in prices for energy and other commodities, need to be reversed. For the Russian military-industrial complex, a resumption in the pre-2014 tempo of state orders would be a welcome result. In recent months, there have been clear signs that belt-tightening in Russia, and the need to prevent further cuts in social spending, would eventually lead to a levelling-off in defense spending.

Moscow may also seek to determine how serious the U.S. announcement is. America is, after all, at the start of a budget cycle, and this is not settled policy but rather part of a budget request that must still make its way through Congress. Given the ongoing mantra of "doing more with less," ambitious budget announcements in February may be scaled back as the year progresses. This is also a short-term proposal which does not, as of yet, represent any long-term commitment.

It will also be important to see how European allies react. Despite all the worry about an imminent Russian threat, most European states have not committed to undertaking even modest increases in their defense spending. A U.S. announcement of increased defense spending for Europe that is met in European capitals with sighs of relief that the American cavalry is returning and is not met by concurrent increases across the board in Europe (or even provides cover for further cuts) will end up minimizing its impact.

Russia, after all, has the home-field advantage along its western borders. America can always make temporary increases in central and eastern Europe, but at the end of the day, Russia retains the capacity to surge forces at short notice; Moscow's ability to cloak its intentions using snap exercises and readiness drills has dramatically improved in recent years. Some experts have argued that nothing short of a permanent deployment of two full armored brigades, accompanied by more naval and air assets, will provide a real deterrent. They would argue that this current plan is more an effort to send signals rather than to take on the real burdens of rebuilding an American conventional strategic deterrent in Europe.

But the real unanswered question is what will happen to the "borderlands" between NATO members and the Russian Federation. The likelihood that Moscow is contemplating a march on Warsaw is quite low. American and other NATO forces stationed in NATO member states can augment defensive capabilities of the existing members, but will an increased U.S. presence in Poland or Romania change Russian strategic calculus when it comes to dealing with non-NATO members like Ukraine and Georgia? Here, Moscow may be willing to continue to call the West's bluff: despite its rhetoric, NATO has conceded that these countries lie beyond the pale of effective Western intervention.

Finally, how does this play out in terms of Russia's relations with China? Beijing's quiet support of Moscow during the Ukraine crisis seems to pay dividends. A United States that is now pivoting back to Europe and which seems unable to fully extricate itself from the Middle East remains in no position to complete its full rebalance to the Asia-Pacific. Russia continues to provide the United States with a suitable strategic distraction while also guaranteeing that a closer Western-Russian rapprochement to counterbalance China is not feasible, at least for the foreseeable future. Will China decide that strengthening Russia's capacity to respond (and to deploy more of its key weapons systems in its west) serves its own interests?

We should expect heated rhetoric in response. But the test will be whether the United States will show follow-through—and whether it has any real impact on Moscow's strategic calculations.

Nikolas K. Gvosdev is a contributing editor at the National Interest and co-author of Russian Foreign Policy: Vectors, Sectors and Interests (CQ Press, 2013). The views expressed here are his own.