How North Korea Is Ensuring a Nuclear Arms Race in Asia 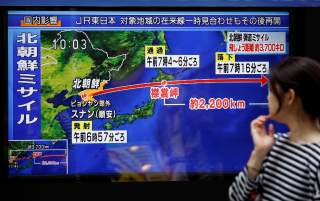 In firing yet another ballistic missile directly over Japan, the second in as many months, Kim Jong-un is trying to normalize the idea of North Korea’s strategic capability. Normally, it would seem that this latest provocation will result in an even firmer coalition of South Korea, Japan and the United States opposed to his nuclear and missile programs; even more, Kim’s brazen recklessness and increasing threat to regional stability may force China into a more serious attempt to curb him. Yet it is just as likely that Kim’s repeated flouting of international condemnation at little actual cost is serving to prove the idea of North Korea’s essential immunity from outside pressure. In reality, both of these outcomes are happening at the same time.

There is no longer any doubt that Kim is far more brazen than either his father or grandfather before him. What we will never know, however, is whether Kim Il-sung or Kim Jong-il would have acted the same as their descendant had they possessed the same technical capabilities. This is an important question to ask, since much official analysis of Kim’s character and motives is based on the growing conviction that he is somehow less stable, more erratic, less restrainable and more dangerous than his forbears.

Yet it may simply be that there is an inherent logic in North Korea’s aggressive behavior. It not only is increasing the pace of missile launches and nuclear tests in order to perfect its programs, but because it must be seen as continually challenging the foreign opposition to its policy. This serves to keep Washington, Seoul, Tokyo and Beijing continually off-balance in a preemptive way—even before Pyongyang has reached the point of having a fully reliable and capable strategic weapons capability. If so, it may also be seen as analogous to Kim Jong-il’s determined pursuit of a nuclear capability even while negotiating with the Bush administration, resulting in the country’s first nuclear detonation in 2006. The logic underlying this behavior is that North Korea will never voluntarily surrender its nuclear weapons and ballistic missile program, either due to inducement or coercion.

Perhaps the global community is beginning to accept what this means. While the official talk is still of some type of renewed negotiations and a settlement leading to denuclearization of the peninsula, the sober reality is sinking in that only compulsion will work, in other words, some type of use of force to change Kim’s behavior. However, the bar remains so high against preventive war that Pyongyang believes it is safe from an allied attack that it has not provoked due to miscalculation or crossing the line. Hence, Kim’s frenetic schedule of missile launches is calculated to work in the space between diplomatic engagement and armed conflict, normalizing the idea of North Korea as a nuclear and missile-capable state.

There remains no agreement among the foreign powers how to deal with North Korea. A senior Chinese academic at a conference outside of Los Angeles this week commented privately that, even if some type of “grand bargain” with the United States were possible over North Korea, “how can we be sure we can trust you, since when you change presidents you also change policies?” The remark revealed that at least some leading Chinese thinkers look at North Korea in terms of years or decades, and not as the crisis of the week or month. What the comment underscored was China’s worry that Washington ultimately seeks regime change in Pyongyang that could result in a unified, pro-Western Korea, which would be seen as a direct threat to Beijing’s interests in Northeast Asia.

This hesitance of China’s leadership to get serious about pressuring Kim is why sanctions likely will never reach the type of strength needed to possibly force him to submit to foreign pressure. Sanctions can take years to have an effect, but only if they are comprehensive and targeted at vital elements of a regime’s power. Even last week, China, along with Russia, watered down the latest round of UN sanctions, preventing a complete block of oil exports to North Korea. If such is the attitude of Beijing and Moscow during the most critical phase so far of the North Korean crisis, then Washington has to seriously reconsider its approach. Meanwhile, despite the apparently strained and hostile relations between Pyongyang and Beijing, Kim can rest assured that the one foreign power that could have the greatest influence on his behavior remains too wedded to the general idea of maintaining North Korea’s existence to force a potential showdown.

The wild cards in the current scenario are South Korea and Japan. Despite his preferred approach of negotiating with Kim, South Korean president Moon Jae-in has been pushed to an ever firmer stance. His government recently negotiated a removal of the limits on the size of the conventional warheads on the South’s ballistic missiles, and in response to yesterday’s missile launch, the South Korean military practiced an attack on a North Korean launch site. Moon has also approved a so-called “decapitation unit,” designed to threaten Kim with assassination. Driven by the pace of events, South Korea may wind up retaliating in some way against the North’s provocations, which could then tip the peninsula into war.

Of more concern is increased signaling from South Korean officials, politicians and opinion-makers that it is time not only for the reintroduction of U.S. tactical nuclear weapons into South Korea (withdrawn by George H.W. Bush in 1991), but that Seoul must consider building its own indigenous nuclear capability. This, of course, would spark a nuclear arms race in Northeast Asia, most likely drawing in the Japanese, who would be unlikely to remain the only nonnuclear power in the region. And China would undoubtedly feel forced to massively increase its relatively modest nuclear arsenal if Tokyo and Seoul both went nuclear.

Yet ultimately, South Korean leaders may decide they have no other choice since the seeming stalemate over denuclearization means they are almost certain to face a future living in the shadow of North Korea’s nuclear missiles. The United States extended deterrence guarantee, pledging the use of American nuclear weapons to protect the South, may begin to look increasingly threadbare as the north develops a full nuclear arsenal. A more conservative South Korean leader in the future might be more willing to pursue even more offensive military capabilities than Moon.

All of this would present the United States with an almost impossible dilemma. Should the entire peninsula go nuclear, there would undoubtedly be calls at home to remove U.S. troops from South Korea, since their utility in a nuclear exchange would be zero. Moreover, in a nuclear proliferated Northeast Asia, it is unclear how the United States could play a stabilizing role, given the multi-polar nuclear dynamic. From one perspective, a nuclear South Korea (and Japan) would seem to be able to defend itself; from another, the United States could be risking thermonuclear attack on the homeland by maintaining a nuclear role in a region filled with similarly equipped states. The pressure to reconsider the U.S.-South Korean alliance, and possibly that with Japan, could quickly become a major strategic issue.

It is such long-term thinking that Washington must consider, for its actions in the short-run will help set the stage for the following years. While the Trump administration is faced with an immediate crisis, the other players in the region are thinking about the coming decades. Above all, by maintaining pressure on the foreign powers, Kim Jong-un may be stalemating them in the short-run, but setting up Northeast Asia for a frighteningly unstable nuclear future.

Michael Auslin is the Williams-Griffis Fellow in Contemporary Asia at the Hoover Institution, Stanford University and the author of The End of the Asian Century.