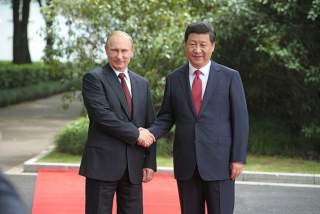 Further U.S. and EU sanctions could have a severe impact on Russia’s economy. However, Americans should understand that both Kremlin officials and Russia’s citizens would see crippling “sectoral” sanctions against Russia’s financial institutions or energy companies as acts of economic warfare. Such sanctions would not only impose costs on our own side—particularly the Europeans, and Germany most of all—but also encourage the Russian government to treat the United States and its allies as enemies rather than superiors. History provides scant evidence to suggest that Moscow would change course; far-reaching sanctions have not changed policy in Cuba, North Korea or Iran. Likewise, the U.S. oil embargo targeted against Japan before World War II did not contain the crisis—it accelerated it. Putin is supported by a political consensus that submission is no longer a sustainable foreign-policy option.

Moreover, when one hears U.S. officials and members of Congress declare that sanctions have brought Iran to its knees, it is hard to know whether to laugh or cry. Iran has not abandoned enrichment, stopped developing long-range missiles or ceased assistance to Syrian president Bashar al-Assad. Russia is economically much stronger than previous sanctions targets such as Iran, and as of this writing, some 86 percent of the population supports Putin, at least for now, and many on the Internet claim that if anything, Putin is the accommodationist.

Launching economic war against Russia would mean entering uncharted territory. Moscow would have no shortage of options, and many are already under discussion publicly and privately. First, Russia might start cooperating with anti-Western movements from Afghanistan to the Middle East, Africa and Latin America. The list of such governments and groups interested in Russian assistance would be long and imposing. According to Mikhail Gorbachev’s adviser Alexander Yakovlev, when the U.S.-Soviet relationship reached a crisis level in 1983–1984, former Soviet leader Yuri Andropov ordered considerable expansion of the USSR’s support for terrorism, something that contributed to the dramatic hostage takings in Lebanon.

Among plausible recipients of Russia’s sophisticated weapons might be Iran, which is currently suing Russia for failing to fulfill its obligation to supply S-300 antiaircraft missiles. Russia suspended delivery of these weapons at the urging of the Israeli government, which it considers friendly. If it chose, however, Moscow could bypass the more moderate government of Hassan Rouhani and offer expedited delivery of the S-300 systems, or the more advanced S-400, directly to Supreme Leader Ali Khamenei. Israel might want to attack Iran’s nuclear installations before the missiles arrived—something that could trigger a war in the Gulf, attacks on American targets, oil and gas supply disruptions, and huge increases in energy prices. Russian officials may expect that this would improve the Kremlin’s bargaining position vis-à-vis the West, especially Europe. Avoiding concessions to Moscow might mean making them to Tehran, possibly at Israel’s expense. Which is less palatable?

The Obama administration should also be much more careful about its message to Ukraine’s government. Visible U.S. support is important, but Washington must avoid providing officials in Kiev with the same false sense of support that facilitated Saakashvili’s ruinous confrontation with Moscow.

An escalating dispute in Ukraine could not but affect already-struggling European economies. Investor confidence could become especially shaky in the Baltic states, where Moscow could exploit any economic slowdown to mobilize significant and poorly integrated ethnic Russian communities in Estonia and Latvia to destabilize governments. Latvia’s capital, Riga, already has an ethnic Russian elected mayor who openly favors a closer relationship with Moscow.

Some will argue that Moscow would not risk this with NATO members. But notwithstanding President Obama’s references to Russia’s weakness, Russia has an impressive superiority in conventional forces vis-à-vis Ukraine and in Central Europe and a roughly ten-to-one superiority in tactical nuclear weapons, of which it has an estimated two thousand, compared to about two hundred deployed in Europe for the United States. Russian military planners consider tactical nuclear weapons an important component in the overall balance of forces and are preparing integrated war plans that include nuclear options. Even more dangerous, Russian generals might assume that NATO would recognize this imbalance and would therefore not dare to escalate.

Finally, while Russia may have limited options to impose direct economic harm on the United States, Americans should recognize that attempting to use U.S. dominance in the international financial system as an instrument against another major power will encourage not only Moscow but also other nations to see the American-centered global financial system as a threat. This could put new momentum behind existing efforts to weaken America’s international financial role and might even prompt some to seek to undermine the global financial system as we know it today. Since that system is a key source of U.S. strength and prosperity, Obama administration officials should think twice before weaponizing international finance. New reports suggest that Russian companies are already exploring nondollar settlements with Chinese firms; even if modest, this could open a Pandora’s box.

THESE OMINOUS possibilities are far from inevitable. Putin and his associates would have to consider huge potential costs to Russia—and to their personal fates—before upping the ante with NATO. Nevertheless, these dire scenarios are not fantasy. What is remarkable is that few in the U.S. executive branch or Congress are paying the slightest attention.

It is not merely intellectually inconsistent but also peculiar that the same officials and commentators who view Putin as an evil genius also expect him to accept Western punishment with a combination of easily dismissed bluster and toothless symmetrical action. Likewise, it may be politically convenient to ignore the very real possibility of Russia drawing closer to China, but it is strategically reckless. By any logical criteria, American leaders should see China rather than Russia as their greatest challenge.

China is both more central to the world economy and more integrated into the world economy than Russia. Despite its assertive conduct, Beijing is not seeking conflict with the United States. Like Russia’s leaders, however, Chinese officials see Washington as bent on containment and a potentially dangerous democracy-promotion policy. This is an important confluence of interests between China and Russia that U.S. leaders must consider. The post–Cold War world is over and a new world is emerging.

Of course, there are big differences in interests between Russia and China—and each has enduring grievances against the other. No less important, China’s nominal GDP is roughly four times the size of Russia’s, and it is much more connected to the U.S. economy. Thus, under normal circumstances, Beijing and Moscow feel that they need Washington, particularly when it acts in concert with Brussels, more than they need each other. But are today’s circumstances still normal? If both governments believe they face dangerous pressure, each may see the other as a natural partner in balancing against the West. New public U.S. cyberespionage charges against Beijing may further sway China toward Moscow.

While China abstained from voting on the resolutions concerning Crimea in the UN Security Council and the UN General Assembly, it was still pretty clear where Beijing’s sympathies rested. China is reluctant to support Russian positions openly, especially in view of its own separatism concerns. Despite this, China does not approve at all of the way the United States and the European Union have handled the Ukraine situation. The Ukraine crisis will push Russia and China closer, but exactly how much closer depends on U.S. and EU policies. At a minimum, they have much that unites them, including difficulties with their immediate neighbors, each of which are supported by the United States. Putin and Chinese president Xi Jinping signed a major natural-gas agreement as well as an unreported foreign-policy coordination agreement during their May 2014 meeting; though neither may live up to Moscow’s hopes, U.S. and European officials will take grave risks if they ignore or minimize the Sino-Russian relationship. From time immemorial, efforts to isolate a major power without defeating it have generally led to international realignments and new alliances—and whatever Obama may think, the present century is unlikely to differ from the previous five millennia of recorded history. A contest between two revisionist coalitions—the hegemonic West and a rising China–resurgent Russia alignment—could be explosive.

In this context, it is useful to remember how Bismarck won an informal alliance with Russia by supporting Czar Alexander II against England and particularly France during an 1863 rebellion in Poland. Alexander II warned Napoleon III that continued French support for the insurrection would force him to abandon his alliance with France. Facing public pressure, Napoleon III ignored this warning. Seven years later, Prussia crushed France, Napoleon III lost power and a unified Germany was born—in no small part because Bismarck persuaded Alexander II to remain on the sidelines. China may not have a Bismarck, but Beijing could become increasingly bold in pursuing its geopolitical ambitions with tacit Russian support.

BY ALL appearances, Putin does not want (with or without Western sanctions) to invade Ukraine and accept the enormous costs of absorbing all or part of it even if some rhetoric clearly could be viewed as a threat to Kiev and encouragement to pro-Russian elements. Since the United States and European Union are likewise unprepared to fight to reverse the annexation of Crimea, the current standoff may remain under control for the time being. What we need to understand, however, is that Ukraine is today’s equivalent of both the Balkans and the Middle East of the Sykes-Picot era—an artificially divided land, assembled by Soviet Communist leaders on the basis of arbitrary borders. It includes people who speak different languages, have different religions, belong to different cultures and even civilizations, and have rather different aspirations.