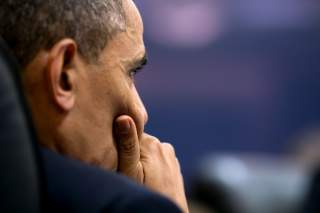 In the first presidential election since 1968, domestic tranquility is a burning issue. Domestic tranquility, that lofty term from civic classes and Saturday morning Schoolhouse Rock, weighs heavy on the minds of Americans who probably never considered it before. We have no choice after San Bernardino, Chattanooga, Dallas, Baton Rouge, Orlando, Brooklyn, Paris, Nice, Baltimore and Brussels all became a bloody blur of escalating violence.

But even in 1968, threats to domestic tranquility were not as severe and not as dangerous. That’s why “Make America Safe Again” was the central theme at Monday’s session of the Republican National Convention in Cleveland.

What makes 2016 different is that the bloodshed is part of a barbaric struggle to unravel Western institutions and the rule of law. The seemingly random violence is the vanguard of two not unrelated ideologies. Both the radical Islamic attacks on domestic tranquility and the racialist attacks on the police aim to undermine the American constitutional order.

Don’t call them “lone-wolf attacks.” The term “lone wolf” insulates each new act of mayhem from a larger context and from ideology. The killers might act alone, but they are certainly not alone in their burning hatred for Western values and the rule of law.

Disassociating the killer from the overarching narratives and ideologies delays the moment when the West will fully understand what is happening.

Understanding the world the drafters of the Constitution wished to put behind them explains the importance of domestic tranquility and why it was part of the Constitution’s preamble. The founders sought to remake a world where one religious faction unleashed wanton slaughter on innocents of another religious faction, often with the imprimatur of law. English history was characterized by centuries of this bloodletting. The founders sought to foster an everyday existence governed by peace, predictability and benign authority preserving public order. That is the “domestic Tranquility” the Constitution sought to insure.

What we are seeing in the flames of Baltimore and the bloody streets of Dallas and Baton Rouge is the normalization of chaos. Remember, chaos was the most common human experience for thousands of years. With rare and short exceptions, civilizations were always on edge, worried about the sacking of their town by foreign invaders or homegrown barbarism that came in so many different forms. When the rule of law and individual liberty were enshrined as cultural values, the chaos abated.

But the nature of man didn’t change. Domestic tranquility doesn’t happen by accident. Institutions cultivate and protect it. Those institutions are now under attack, and it will be a defining issue in the presidential election. Attacks on American institutions, and the failure of some to defend them, may explain the rise of Donald Trump.

Instead of domestic tranquility, America is experiencing chaos built on lies. We have fallen so far so fast that once credible figures give interviews noting that it is wrong to kill cops—“but….”

This is why the Black Lives Matter movement lost all moral authority on the streets of Dallas.

Ferguson provides the architecture of how this chaos was built on lies. It is an established fact that Michael Brown was shot on a Ferguson street by Officer Darren Wilson in a justifiable use of force. Brown charged Wilson and sought to grab his gun.

But you would never know it at the time. Street theater and threats accompanied a well-funded and coordinated campaign to elevate the issue of police shooting black men. Stores burned, and Attorney General Holder traveled to Ferguson on the vice president’s 757 and sought to elevate the conversation by reminding everyone, “I am a black man.” The Obama administration sent every possible signal as to which side of the dispute it was on, and the antipolice activists were emboldened.

This was not new or surprising. The administration has taken the wrong side on nearly every racial issue since the inauguration in 2009. They’ve spent millions to pay consultants and lawyers to develop an antipolice narrative that the American justice system is built on structural racism. They’ve imposed outlandish oversight protocols on police departments that make the lives of ordinary Americans—and cops—less safe. They have claimed basic election integrity safeguards, such as voter ID or cleaning voter rolls of ineligible voters, as the return of Jim Crow. All along, they’ve echoed the racial rhetoric of the most preposterous college professors regarding race relations.

Instead of President Obama using his unique historical opportunity to heal a nation, he has picked at the scab and reopened wounds. He cannot even eulogize murdered police officers without inserting the narrative of antipolice grievance. His inability to speak appropriately about the murders of police officers undermines his own moral authority, and further endangers domestic tranquility.

The president’s reaction to the jihadist murder of innocents in Paris, Orlando, Brussels, Turkey and San Bernardino—and on the shores of Libya—also invites more chaos. Dusting off centuries-old narratives about the Crusades is not the appropriate response to Christians being beheaded for their faith. It sends a signal to the most evil enemies of America that its leader lacks the moral clarity and certainty that characterized other defenders of Western civilization, such as Churchill and Reagan. Notice how after each rampage by a jihadist or race-obsessed cop killer President Obama and other administration organs are quick to say the “motives are unclear.” That’s usually a sure sign the motives are perfectly clear to most Americans. When elites charged with protecting domestic tranquility ignore the darkest evil, bad things happen to civilizations. Chaos follows.

Michael Brown’s mother will be speaking at the Democratic National Convention in Philadelphia. Democrats are making a big mistake. Americans respect the police more than the tragic figure from an embellished story of a shooting in Ferguson, Missouri. We are a nation that has treasured the precious gift of the law. We teach our children not to steal, and certainly not to charge police officers and attempt to grab their firearms.

At least you can’t argue there’s no difference between the presidential candidates.

As Virginia Woolf wrote in her masterpiece To the Lighthouse, “the nights now are full of wind and destruction.” There is unease and fear. Many are experiencing for the first time the tremors and terrors of far-off lands and long-past eras. Expect the forces who have divided us and attacked us to press their advance. They have the money, and they have the mobs and friends throughout our institutions. Or else good Americans can restore and treasure the institutions that blessed us and provided our security.

J. Christian Adams is the author of the New York Times bestseller Injustice: Exposing the Racial Agenda of the Obama Justice Department (Regnery, 2011). He is a former Justice Department lawyer and serves as President of the Public Interest Legal Foundation.