How One French Director Brought the Vietnam War Home for Americans 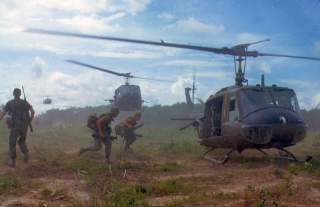 Vietnam was a war, not a movie. Each new Vietnam movie meets some version of that charge, but Vietnam news documentaries have always fared better, perhaps a tribute to the people who risked their lives to produce them. In 1967, the first major documentary appeared as a CBS News Special Report featuring a film by French director Pierre Schoendoerffer. It was an hour-long introduction to key features of the American War in Vietnam told through the filming of an American platoon. Schoendoerffer had put himself in just the right place by picking the First Cavalry Division in the Central Highlands. He could show the new American war, the Americans who would fight that war, and a particularly important region of the conflict. In retrospect, it's grainy, black and white realism gives a lasting visual context to what was at the time daily news.

In 1954, Schoendoerffer was an enlisted photographer with the French Army Cinematographic Service in Indochina. Wounded at Dien Bien Phu early in the operation, he was evacuated for treatment, and then parachuted back into film the siege. At the French surrender, he destroyed his camera and films except for a few short clips that disappeared into the hands of Soviet cameraman Roman Kamen then filming an epic celebration of the Viet Minh victory. None of Schoendoerffer’s film from the siege survived.

A dozen years later, Schoendoerffer went back to Vietnam to film the new American war and accompanied an American platoon for six weeks. His film was shown on French public television in February, 1967. On July 4, 1967, CBS presented a one-hour adaptation of that documentary as The Anderson Platoon, titled after the platoon’s commander Lieutenant Joseph Anderson.

The Anderson Platoon was not high cinematic art, shot in black and white with all the blurred confusion of battle at the platoon-level. Its vignette of booted feet marching through mud to Nancy Sinatra’s “These Boots Are Made for Walking” was too cute, but its television presentation was memorable. It was on television as news, not drama, and spoke to many people who would never go to a Vietnam movie. Anyone who knew Vietnam was the war in their personal future, as I did, had reason to remember and reflect on the program.

Schoendoerffer narrated the original television version and you can hear more than a heavy French accent in his voice. His intonation makes some lines easy to remember, among them: "It began on a Sunday in September 1966. On this day, the Vietnamese in their pagodas try to appease all the souls of the unburied dead—wandering souls: those of beggars, prostitutes and soldiers."

The Service for the Forsaken Spirits, Cung Co Hon, is observed on the fifteenth day of the seventh lunar month and can last as long as a week. It is not a new year’s festival like Tet, or a Vietnamese version of the Catholic Commemoration of All the Faithful Departed (All Souls), or a patriotic memorial day. In a society that believes in ghosts, Cung Co Hon is exactly as Schoendoerffer described: an attempt to appease spirits who left this world with a grievance and might now bother the living.

A central part of the platoon’s story was the human dynamics of a platoon of blacks and whites led by Anderson, a black platoon leader. At the time, Anderson was at the beginning of a distinguished military career and the model of an infantry platoon leader with a good platoon. Race did not seem to matter. That harmony would fade over time at home and in Vietnam, but at that moment The Anderson Platoon provided a reassurance difficult to fully appreciate today. Following soldiers away from the field, there was no suggestion they were growing into plaster saints; but in the field or away, they were decent men with a difficult task.

The First Cavalry Division embodied the aggressive new tactics enabled by the massive use of helicopters. The Cav would fight in battles all over Vietnam while also serving as the war’s exterior decorator, painting their yellow horse blanket patch on remote rock faces made accessible by those same helicopters. In late 1966 and 1967, the Cav was operating from Camp Radcliff at An Khe in Binh Dinh Province. Its main force enemy in Binh Dinh was the Yellow Star Division. The division claimed to be a Viet Cong unit, but two of its three regiments were North Vietnamese regulars who had come south over the last year, and the Americans carried it as the Third North Vietnamese Army division in the order of battle. The Americans sought to find, fix and destroy these regiments in a series of operations over the 18 months the First Cavalry Division remained in the province.

In the six weeks that Schoendoerffer stayed with the thirty-three men of the platoon, there was one death. Late in July after the CBS program had been shown, there was a small item on page seventy-five of the New York Times reporting that in the time since the filming four additional soldiers in the platoon had been killed in action. Five dead out of the original thirty-three without a large battle. The French had a word for this: “grignotage” (literally “nibbling”). Bernard Fall had described the “slow gnawing away man by man, platoon by platoon” that characterized the French war in the Central Highlands. The Americans search and destroy approach sought decisive battles not attrition but even in the search phase there was a nibbling that was quite real.

As the July 1967 television audience was seeing the platoon’s actions of September and October 1966, their daily paper reported that the Cav was still fighting in Binh Dinh. After nearly ten months of search and destroy operations by a powerful and aggressive American division, the Yellow Star Division was still in Binh Dinh. It was pushed away from Route 19, and moved around, often into the coastal mountains. It stayed for years in the face of the Cav and then the 173rd Airborne Brigade, large search and destroy operations, and the accelerated pacification campaign. The division had good days and bad days and many hungry days, but it stayed on. Over time, North Vietnamese replacements headed south would tattoo themselves “Born in the North to die in the South” in a grim acceptance of their role in the war and the price of staying on.

“War is God’s way of teaching us geography” is an aphorism worthy of Carl von Clausewitz or Helmuth von Moltke, but neither said it. It is often ascribed to Ambrose Bierce who served as a topographical engineer in the American Civil War, but there is no evidence that he ever wrote it. The comedian Paul Rodriguez appears to have coined the expression in a comic routine in 1987. In 1967, there were seemingly endless geography lessons in the Central Highlands and Binh Dinh Province; none of them were funny.

The Anderson Platoon marching in mud sequence and the sight of the mountains gave a sense of the terrain; difficult for the Americans to move over once on the ground, too easy for the enemy to escape encirclement and vanish into once engaged. In Tactical Operations Centers and headquarters briefing rooms, soldiers plotted the action on map walls that pieced together 1:50,000 scale map sheets. Numbered map pins showed current operations and key incidents. Over time, repeated plottings would build a pinhole pattern so dense that the frustrating cascade of operations and escapes would be clear to anyone.

The Cav was built around helicopters, but it needed a road to quench its thirst for fuel. The road to Camp Radcliff, Route 19, was becoming the main supply route for the Cav, and then for the whole Central Highlands as far west as the Cambodian border. From then on it was the main artery for the entire Military Region. The French had not used this road to supply the highlands from the coast because Binh Dinh was then a communist stronghold and the route through the An Khe Pass could not be secured.

For those of us who came to the war late, when the Americans proposed only to support the Vietnamese, the trip along Route 19 from Qui Nhon revisited scenes from The Anderson Platoon and even earlier history. At Camp Radcliff, there were just a few helicopters of the hundreds who had been there in 1967. And those of the Forth Infantry Division were already preparing to depart. Farther west at the 15km road marker, the French Group Mobile 100 had been ambushed and largely destroyed in 1954. Past the Mang Yang Pass and north of Kontum was the true high plateau and the scene of early American battles of the Dak To campaign. But now the battles were those of the South Vietnamese Twenty-Second Army of the Republic of Vietnam Infantry Division. For Americans, there were still battles here with the intimate confusion and uncertainties of The Anderson Platoon, but they now had a different rhythm and purpose.