How One Man Could Obliterate Obamacare 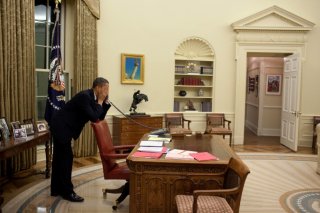 For five years, Republicans have been searching for the perfect messenger to speak out against Obamacare.

They have finally found him. His name in Jonathan Gruber.

Gruber is the MIT health economist who was one of the health-care law's architects. He also helped design the (now mostly defunct) Romneycare system in Massachusetts, which is currently being devoured by its federal progeny.

He has also been single-handedly responsible for the biggest Obamacare-related gaffes since Nancy Pelosi said we'd have to pass the bill to see what's in it or the president's discredited promises about being able to keep your doctors and health plans.

(You May Also Like: 6 Best Presidents of All Time)

Gruber has been caught not once, but twice, talking on tape about how the "stupidity of the American voter" made a certain amount of duplicity essential to the passage of Obamacare.

The Obamacare architect had already become Exhibit A in the Halbig v. Burwell case, now on its way to the Supreme Court, which could potentially make people who bought health insurance through the federal exchange ineligible for subsidies.

Gruber—again, not once, but twice—publicly endorsed the view that Obamacare was designed in this way to encourage states to set up their own exchanges. Since many states did not, a large number of Americans obtained their coverage through the federally run HealthCare.gov. The law could fall apart if these people don't receive taxpayer subsidies.

(You May Also Like: 5 Worst Presidents of All Time)

Whatever you think about the intelligence of the average voter or the funding mechanisms for Obamacare, Gruber is clearly right about one thing.

"This bill was written in a tortured way to make sure CBO did not score the mandate as taxes," Gruber admitted in 2013. Does any serious person really contest that this is true? Fortunately for Obamacare partisans, that did not stop the Supreme Court from ruling that the individual mandate was permissible under Congress' taxing power, since any other constitutional justification was a stretch.

"In terms of risk-rated subsidies, if you had a law which explicitly said that healthy people pay in and sick people get money, it would not have passed," Gruber added. "You can't do it politically, you just literally cannot do it."

Is the man wrong about this, either? Sure, there was an abstract discussion about the need for the young and healthy to participate. That's rather different than admitting the law would have winners and losers.

(You May Also Like: Obamacare: Nothing Short of a Disaster)

Obamacare is largely a Medicaid expansion plus churn between old health-insurance plans and new Obamacare-compliant ones, so far achieving modest gains in coverage at the cost of higher premiums and reduced access for many.

It's hard to imagine the stupid American voter would be enamored of this, if smart people like Jonathan Gruber had deigned to explain it to them at the time.

The Obamacare debate may have been more transparent than the one surrounding Medicare Part D, but that's rather like pointing out the tallest building in Topeka.

Gruber-gate is important for a few reasons besides the normal political "gotcha" game. First, it reminds us that Obamacare's losers will remain a vital part of the repeal constituency. The mobilization of such people was essential to rolling back the Medicare catastrophic coverage expansion of the 1980s, one of the most prominent examples of a broad-based entitlement being repealed in the post–New Deal era.

Second, it is a fitting window into how the technocrats view the masses. You might have liked the health plan you already had, but Jonathan Gruber knows it was bare-boned and terrible. The liberals truly are the best and the brightest.

Now Gruber is saying he misspoke and his allies are adamant that any text of their law that might lead to unfavorable results is simply a typo. Move along, there's nothing to see here.

(You May Also Like: A Conservative Pathway for Immigration Reform)

In turns out that even passing Obamacare wouldn't be enough to let us find out what's in it.

We're all too stupid to figure it out. That apparently includes the policy wonks who helped design the law and the Democratic supermajorities that passed it all those years ago.