How President Hillary Could Reverse Course on TPP 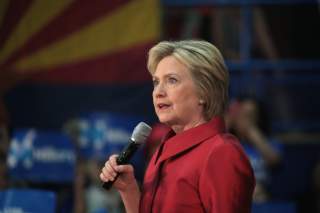 After helping promote the Trans-Pacific Partnership (TPP) as secretary of state, Hillary Clinton changed her position on the issue as a presidential candidate. Faced with a tough primary challenge from TPP critic Bernie Sanders, and now a presidential campaign against TPP antagonist Donald Trump, she has taken a strong stance against it: “My message to every worker in Michigan and across America is this: I will stop any trade deal that kills jobs or holds down wages, including the Trans-Pacific Partnership. I oppose it now, I'll oppose it after the election, and I'll oppose it as president,” she recently said.

But if she is elected president, as current polling suggests is likely, she will need to engage with the rest of the world on trade. Tough talk on trade may be seen as necessary during campaigns, but a president naturally looks outward. International affairs is an area where a president has a great deal of power, and presidents are drawn to it. A former secretary of state, Hillary Clinton will be no different, and at some point she will look for ways to engage with other countries in trade negotiations.

Assuming the TPP is not passed in the lame-duck Congressional session, she will immediately be confronted with the reality of a fully negotiated trade agreement that key U.S. trading partners would like to see ratified. Signing the TPP would be an obvious way forward on trade and on foreign policy. The problem is, she has dug in deeply with her TPP opposition during the campaign. While she could flip-flop on the issue, and support TPP as is or with minor tweaks, there are risks in doing so. As important as international affairs is, she is going to have a domestic agenda as well. Pushing forward with TPP will raise the ire of progressives who she will need to work with on that agenda. As a result, supporting TPP as it is presently written could be politically dangerous for her.

What Clinton needs is a significant revision to TPP that she can tout as a real reform to trade agreements, one that satisfies some of the TPP's critics on the left. A minor tweak is unlikely to assuage anyone; this change needs to be a major one. Fortunately, there is a TPP provision that fits the bill perfectly: investor state dispute settlement (ISDS), the procedure that allows foreign investors to sue governments in an international tribunal. Removing ISDS could triangulate the TPP debate, allowing for enough support to get it through Congress.

ISDS is the perfect candidate for two reasons. First, Clinton has already criticized ISDS. In her 2015 book, she wrote: “. . . we should avoid some of the provisions sought by business interests, including our own, like giving them or their investors the power to sue foreign governments to weaken their environmental and public health rules, as Philip Morris is already trying to do in Australia. The United States should be advocating a level and fair playing field, not special favors.” Thus, a push to remove ISDS would not be a flip-flop at all, but rather a fulfillment of her past promises.

Second, the progressive left hates ISDS. Senator Elizabeth Warren wrote the following last year in a Washington Post op-ed: “Giving foreign corporations special rights to challenge our laws outside of our legal system would be a bad deal. If a final TPP agreement includes Investor-state dispute settlement, the only winners will be multinational corporations.” If Senator Warren and others are serious about making good policy, and not just posturing for certain interest groups, they will have to concede that the removal of ISDS is a significant change to U.S. trade policy. It may not give them everything they want, but it does give them quite a lot, as ISDS has been a core feature of U.S. policy since the early 1980s.

Of course, nothing is ever that easy, and there is a problem: as much as some people hate ISDS, the business community loves it and will fight hard to keep it. They will lobby the GOP leadership and others sympathetic to business interests to oppose this change. As a result, it is possible that any support gained from the left could be lost on the right.

But note that we have had trade agreements without ISDS before (and that even without ISDS, the normal state-state dispute process used in international law would be available.) Congress passed the U.S.–Australia trade agreement easily back in 2004 without ISDS, with the support of business groups. Also, as much as GOP leaders like to accede to the demands of the business community, they are probably not eager to see foreign investors suing the U.S. government in an international tribunal (as TransCanada has recently done after the rejection of the Keystone XL pipeline.)

Another problem is that the United States would have to convince its TPP trading partners to reopen the negotiations and take ISDS out. However, some of those governments have only signed on to ISDS reluctantly, and they may not have much objection to its removal.

Hillary Clinton may be secretly hoping that TPP passes during the lame-duck session, so she does not have to deal with it. However, this GOP Congress might not want to let her off the hook so easily. If elected, she will need to engage on trade negotiations at some point, and dropping ISDS from TPP could offer her a way forward.