How to Prevent a Nuclear Arms Race in the Middle East: Invest in Stability Instead of Conflict 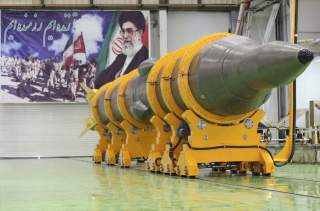 There are two current trends in the Middle East that threaten to enable a nuclear arms race. A third offers a way to prevent it.

The first concerns the very aggressive pace of Russia’s efforts to expand its influence throughout the Middle East from Egypt through Syria to Iran, and in the process to displace the United States as the preeminent power in the region. This is not a new phenomenon. For centuries, Russia has sought to gain assured access to the world’s oceans and to overcome the impediments posed for example, by the Bosporus and Turkish Straits which stand in the way of that access. Their ultimate goal is to ensure access to distant critical resources and to control choke points vital to the flow of global maritime commerce.

Throughout the past two years, the U.S. government has watched passively as Russia intervened in the Syrian Civil War on behalf of Syria’s brutal dictator, Bashar al-Assad. Moscow’s intervention has little to do with the welfare of the Syrian people, and everything to do with securing port facilities at Tartus and an air base at Khmeimim. Now under Russian control, these two bases will serve as the western anchor of their strategy to link Syria (and ultimately Iraq) with Iran. Russia’s support for Iran’s nuclear power program and its generous offers to sell state-of-the-art sophisticated weapons to the Khamenei regime, gives it powerful influence over Iranian policy. Moscow has already been allowed to launch tactical air missions into Syria from an Iranian air base.

The second trend involves the international ambiguity that has arisen concerning U.S. policy toward preventing the proliferation of nuclear weapons. Specifically, the United States has lacked a clear strategy for promoting the peaceful use of nuclear energy in the Middle East since  signing of the joint comprehensive plan of action (JCPOA) with Iran in 2015. the JCPOA was designed to place restraints on Iran’s nuclear-power program and prevent it from becoming a nuclear-weapons program. Regardless of how one may feel about that agreement, it is seen throughout Saudi Arabia, the GCC states, Egypt, Israel and Jordan as enabling Iran to legally pursue a nuclear-weapons program later on. In truth, all states in the Middle East have a desperate need for more electricity. Nuclear power generation is a natural choice for the region as part of a diversified energy mix in the years ahead. The Arab states signed the nonproliferation treaty (NPT) and now, abiding by its terms, are entitled to develop peaceful uses of nuclear technology. The NPT likewise obligates the United States to assist such countries in this pursuit. However, Russia and China are rushing to market their own nuclear power reactors, while U.S. policy lags. This will undermine Washington’s ability to shape the highest standards of nonproliferation safeguards, safety, and security developed and implemented in the Middle East—as we have done so successfully in the United States.

Furthermore, Russian offers come accompanied by thousands of Russian advisors in each Sunni Arab country. Moscow thus has an opportunity to further consolidate its influence and control over countries who own more than 50 percent of all global crude oil reserves and the strategic waterways through which the oil passes.

In short, the Middle East is in the process of going nuclear. The big question is whether the nuclearization of the region will be dominated by Russia and China, or by the host countries in partnership with the United States and its allies under a proven program that ensures absolute safety, security and standardization throughout the nuclear fuel cycle. America’s nuclear security record makes us the acknowledged leader in nuclear nonproliferation governance throughout the world. Russia and China are not even close.

The United States also loses its ability to gather critical national security information by leaving the nuclear energy future of the Middle East to Russia and China. It is virtually impossible to know with absolute confidence if a country is pursuing a clandestine nuclear weapons program or not. This is further complicated when countries pursue higher-risk nuclear power options or engage in enrichment and reprocessing activities. A concerted program among the United States, its allies, and partner countries in the Middle East pursuing nuclear energy is the best option for preventing the temptation for countries in the region to turn their nuclear power into nuclear weapons.

However—and as a consequence of the terms of the 2015 JCPOA agreement with Iran—we lowered our standards by allowing Iran to enrich uranium locally and to potentially reprocess spent nuclear fuel after key limitations on Iranian nuclear infrastructure end in fifteen years. “Enrichment” and “reprocessing” are virtually impossible to police with absolute confidence; thus, posing the risk of clandestine fabrication of weapons-grade uranium and nuclear weapons. Surely, that is the understandable view of the Sunni Arab states who are no longer likely to be willing to sign a nonproliferation commitment more demanding than the agreement we signed with Iran.

There is good news amid all this gloom. We are witnessing the emergence of younger Arab leadership seriously committed to modernizing their countries. A new generation of leaders from Saudi Arabia, Jordan, and the Gulf are committed to the industrialization of their

countries, peaceful development of nuclear power generation that is so desperately needed, and the reform of traditional education standards to focus on labor market needs. They are likewise committed to working constructively with us to bring down ISIS and Al Qaeda, and to modernizing their countries peacefully. These leaders also want to wean their economies off of oil. Instead, they hope to invest in mining, manufacturing, construction, transportation, other infrastructure, massive desalination and even agriculture, so as to provide jobs and career paths for a giant “youth bulge” they must nurture, employ and govern. It would be hard to overstate the historic significance of this Sunni awakening. The Vision 2030 plan approved by the crown prince of Saudi Arabia, Mohammed bin Salman (and corresponding plans developed by the other GCC states and Jordan) calls for the transformation of governance through explicit guarantees of less restrictive civil rights and a major reordering of the social contract between the states and the societies they govern. All in all, this represents a virtual revolution designed to establish “knowledge-based economies” in a generation.

Undertaking an industrialization and modernization program of this scale will require a massive development of electricity and a robust regional grid system. The scale of power needed to link the economies of these six countries can only be achieved through the deployment of state-of-the-art nuclear power plants. Already, the Saudis have announced plans for at least sixteen nuclear plants that will produce seventeen gigawatts of power. To reach this goal they will need an enormous amount of experienced professional assistance to design, build, secure and manage such a massive deployment of new infrastructure. American, European, Korean and Japanese corporations must step up. American and allied companies must come together and forge a proposal that will meet two critical goals: provide secure state-of-the-art nuclear power and maintain strict adherence to effective nonproliferation, safety and security standards. Can we do it? The answer is an emphatic yes.

In sum, we have at hand an opportunity to realign the interests of Arab and American partners—heretofore focused on security alone—to encompass a transformational relationship based on security, industrial and technological cooperation. The scale and scope of this challenge are akin to the circumstances in Europe at the end of World War II. At that time, our war-torn allies faced the urgent and compelling need for relief and reconstruction while facing an uncertain future vis-à-vis the Soviet Union. They needed assistance in rebuilding their institutions and infrastructure. In response, the United States kept its security forces in place and proposed a giant relief and rebuilding program backed by major financial assistance. That program created the underpinning for the Europe that exists today and in many ways created the stability that allowed us ultimately to prevail in the Cold War. Today, after years of conflict throughout the region, the countries of the Middle East are on the threshold of launching a breath-taking strategy, designed to transform their countries into modern, industrialized nation states. Before his death in 1945, President Franklin D. Roosevelt felt so strongly about the strategic importance of the Middle East that he guaranteed American support for the security of the region for the indefinite future. The plans before us today deserve the wholehearted support of the United States and all countries.

Conscious of that legacy and as veterans of twenty-five years of conflict in the Middle East, a team of senior diplomats, recently retired flag and general officers, energy leaders, and U.S. industry partners have come together to create a nonpartisan plan to translate the vision of this new generation of leaders into reality and enable the United States to lead a coalition devoted to funding economic growth and stability, not conflict and continued dysfunction. This team of leaders and companies is working to shape this vision in conjunction with our government in order to bring the best of U.S. industry and government together.

In order to ensure that nuclear fuel is not diverted to a weapons program, the United States will partner with Saudi Arabia, the GCC countries, Egypt and Jordan to create a globally responsible fuel cycle. Together, the transport of fuel, oversight of plant operations, and recovery and disposal of spent fuel will be done with absolute security. We call this approach the “in and out fuel cycle.”

After its first foreign visit to the region, the Trump administration is positioning the United States to engage with traditional Arab partners to form a series of public-private partnerships with six Arab governments in the region. Two special blessings will emerge from this process. First, hundreds of thousands of good jobs will be created for future generations of young Arabs, foreign partners and Americans. These jobs will solidify strategic political and economic relationships for mutual benefit that are inherently built to last for eighty years. Second, the American nuclear industry will be rejuvenated.

Historic challenges are met by statesmen with a grand vision and the fortitude to take action. The United States and its European allies met the challenges after World War II and kept European peace and prosperity for seven decades. History now calls on the United States and its visionary allies in the Middle East and beyond to join together and be guided by a grand vision to lead the region to an era of stability and prosperity. Never before has this been more urgently needed.

Gen. Jack Keane (Army, ret.) is a former Vice Chief of Staff of the U.S. Army and the chairman of the Institute for the Study of War.

Amb. Dennis Ross served as President Bill Clinton’s envoy for Arab-Israeli peace, and is currently the Counselor at the Washington Institute for the Near East

Hon. Robert McFarlane served as National Security Advisor to President Reagan and is the Co-founder of the U.S. Energy Security Council.

Image: An Iranian missile that state media says is a Sejil 2 surface-to-surface missile is seen in front of a banner with a picture of Iran's Supreme Leader Ayatollah Ali Khamenei, at an unknown place in Semnan, 228 km (142 miles) east of Tehran, May 18, 2009. REUTERS/Fars News