How Putin’s War in Ukraine May Backfire 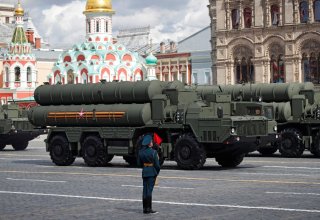 It seems that not just God, but history too, works in mysterious ways. Regardless of how Vladimir Putin’s aggression against Ukraine turns out in the short run—where brutality unleashed by a megalomaniac madman may briefly succeed—I predict that in the years to come, we will look at it as a sea change that set into motion developments that Putin neither anticipated nor wanted, but that transformed the world order to its lasting benefit regardless.

In the space of just a few days, Putin has “accomplished” the following for all of us:

First, he has restored our faith in leadership and in civil courage. The image of Volodymyr Zelenskyy, a resolute leader standing his ground, refusing the U.S. offer to evacuate him, is inspiring. And so are the rest of the Ukrainians. Teenage girls singing patriotic songs in metro stations turned-bomb-shelters. Determined elderly ladies receiving weapons instruction. Members of parliament, academics, and random civilians banding together to defend their neighborhoods. That’s what you do when your country is in peril. After the disgraceful example of the Afghans, whose president, Ashraf Ghani, ran away helter-skelter from Kabul clutching bags of cash, and whose young men hysterically raced to the airport demanding mass sinecures in America, the Ukrainians restore our belief in valor and values. Their refugees, as we see them boarding trains or heading to the borders, consist almost exclusively of mothers with young children and the elderly. The men, along with women unburdened by a responsibility for vulnerable dependents, are staying. Bravo.

The Taliban, when their forces reached Kabul, were expecting to take part in a negotiation with the government that would have produced a power-sharing agreement. Had Ghani and other leaders remained, and had the citizens shown an inclination to defend Kabul as Kyiv has been defended, they would not now have to moan about the Taliban rescinding their modern lifestyle. Fight for it or lose it.

The Afghans had grown accustomed, over twenty years, to the United States doing it all for them—fighting for them, showering billions of dollars on them, telling them what to do and how to do it. In Ukraine, President Joe Biden made it clear from the start that the United States would not intervene militarily. Nor could they count on NATO. This means that Ukrainians had to dig deep and think about what mattered to them and what they were prepared to do and to risk, on their own against a vastly superior power. And their answer was: damn the torpedoes, full speed ahead.

This might be a good moment to reflect on U.S. foreign policy. The Ukrainians are very clearly on the same wavelength as the United States. Their conduct reminds us of the American War of Independence, complete with brave civilians, local defense teams (modern Minutemen), and stirring quotations (“the fight is here. I need ammunition, not a ride”—which Zelenskyy responded when the United States offered to evacuate him to safety). Helping such a population is far more promising and warranted than wasting twenty years and 2 trillion dollars forcing our mindset down the throats of people who aren’t willing to lift a finger for it, and whose overall sense of entitlement is frankly repellent. I haven’t heard a single Ukrainian whine about how we’ve “abandoned” them.

Second, energy independence anyone? Yes, it’s been discussed for years that Western Europe is too dependent on Russian natural gas, and that Russia can and will use that leverage for political purposes. But it was a placid, let’s see how it goes, maybe it’ll be okay, maybe one of these days we should do something about this, kind of knowledge. Now everyone is wide awake. The coming months and years will with certainty bring enormous changes in the energy sector and the energy economy. Already, Germany has announced measures to build major facilities and bring in liquid natural gas from elsewhere.

Third, “give peace a chance.” When the Ukraine invasion began, the Austrian public transport system responded by broadcasting those four words on the arrival and departure screens across its metro stations and streetcar stops. It’s a great message, and I’m not dissing Austria. Having been obliged to declare permanent neutrality as a condition of getting their country’s independence back after World War II, it’s not possible for them to help Ukraine militarily or to join NATO themselves. They’re doing their part as best they can. For example, from the moment the invasion was launched, Austrian authorities and charities began preparing to receive and welcome Ukrainian refugees. They sent truckloads of helmets, bulletproof vests, and medicines. They closed their airspace to Russian planes. Along with other regional railway systems, they announced that Ukrainian passport holders would travel for free on trains through Austria and to the Czech Republic and Germany. So, Austria, well done, and yes, peace is what we aspire to.

But you can’t give peace a chance when you’re staring into the barrel of a gun, facing down a tank, or when your apartment has just been blasted into rubble by a missile. In the words of Ukrainian pop star and member of the band BoomBox, Andriy Khlyvnyuk, who took his children to their grandmother’s house and signed up for the Territorial Defense Forces, “musicians are peacemakers, but now it’s not time for playing guitars. It’s time to take the rifles.”

Europe’s commendable belief in disarmament, peace, and turning away from brute force and violence as instruments of foreign policy is likely, after this object lesson in realpolitik, to give way to what we might call “intelligent pacifism.”

Fourth, as part of intelligent pacifism, we can expect to see the expansion and refinement of non-military, non-lethal, defensive repertoires. It’s happening already. Squeezing Russia’s Central Bank, excluding Russia from SWIFT banking transactions, dumping Russian investments from sovereign wealth funds, and zeroing in on the international assets and investments of the oligarchs who support Putin are just some initial steps that occurred to Western governments in the first days. More is to come. Sanctions have been, in the past, a crude tool, one that hurts civilians more than it affects their leaders. In recent days, however, spurred on by the sight of courageous Russian citizens demonstrating against their government’s irresponsible behavior, the effort to find ways of better targeting sanctions to hurt the decisionmakers and aggressors, is clearly underway.

Fifth, NATO has in recent years become—as President Donald Trump correctly pointed out—a sleepy and complacent outfit. The Europeans had come to see it as a U.S. project, and, therefore, something that the Americans should mostly pay for. Well, that has changed. Suddenly, NATO is once more a very real shield against a very real danger. Germany has just performed one of the world’s quickest turn-arounds, announcing that it is allocating a hitherto unthinkable 100 billion euros to a special defense fund to upgrade its military. “It’s clear we need to invest significantly more in the security of our country, in order to protect our freedom and our democracy,” German chancellor Olaf Scholz told a special session of the Bundestag. Oh yes, it is clear all right, and we have the Putin Wake-up Call to thank for it.

Not only will NATO be toughening up, in all likelihood it will soon be expanding. Bosnia Herzegovina and Georgia will be pressing for accelerated decisions on their pending applications to join, and the other states may now be open to that. If preventing the expansion of NATO was one of Putin’s principal goals, that has gone well and thoroughly awry.

Similarly, Ukraine has requested expedited inclusion in the European Union. While the wheels of bureaucracy grind slowly, they have managed to become hearts-and-minds citizens of the EU overnight, as evidenced by ordinary people across Western Europe who have deluged municipal authorities with offers to house refugees in their homes, have emotionally celebrated Ukrainian athletes during soccer matches, and have turned out by the hundreds of thousands for huge demonstrations in Berlin and elsewhere. Europe clearly thinks Ukraine is one of their own.

Sixth, it’s not just on the level of presidents and populations that this crisis is separating the global wheat from the chaff. It’s also showing us which countries can be trusted, when push comes to shove, to override their narrow economic concerns and do the right thing. Western Europe was reluctant to get involved, but in the light of Russia’s unprovoked brutality, they quickly reconsidered their opposition to military aid, military readiness, and punitive banking measures—even though this will definitely hurt them by causing price increases, fuel shortages, and risks to their own security. By contrast, India and the UAE chose to side with Russia, even admitting that their lucrative weapons trade with the aggressor was the reason. That’s shameful, but at least we know where we stand, and who we in turn should stand with when it matters.

Unfortunately, the outcome of this barbaric Russian move can’t yet be predicted. Maybe Russia will see how grossly it overstepped. Maybe its people, if not its president, will care about the world’s revulsion. Maybe Russian mothers, who had a great impact in ending some of their country’s earlier misadventures, will step up. Maybe peace talks will bring a palatable compromise. Or maybe Putin will succeed. It will be up to all of us to make sure it is a costly, brief, and Pyrrhic victory. And that the world, which at the moment Putin is making a much worse, uglier, and more dangerous place, emerges stronger and smarter.