How to Realistically Solve the North Korea Crisis 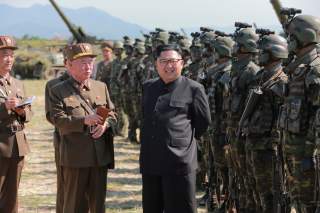 Washington sees North Korea as a security challenge. Yet the North threatens America only because the United States intervened in the conflict between the two Koreas. The case for defending now populous and prosperous South Korea expired long ago.

The Democratic People’s Republic of Korea sees nuclear weapons as its primary means of regime survival. When I visited Pyongyang in June, North Korean officials pointed to Washington’s “hostile policy” and “nuclear threats.” America’s enthusiasm for regime change weighed particularly heavily on DPRK officials: they cited Afghanistan, Iraq, and especially Libya, whose dictator negotiated away his nuclear and missile programs—only to be ousted a few years later by his erstwhile friends.

The potential cost of America’s commitment will rise dramatically once the North gains the ability to retaliate against the U.S. homeland. Yet preventive strikes to take out North Korea’s deadliest weapons and/or decapitate the leadership likely would trigger horrendous, full-scale war. While Americans would die fighting, the Republic of Korea would become the principal allied battleground and suffer mass casualties and destruction. North Koreans, too, would die prodigiously.

In fact, the chief victims of decades of hostility and confrontation on the Korean Peninsula are the DPRK’s citizens. The Kim dynasty, begun by Kim Il-sung and continued through his son, Kim Jong-il, and grandson, Kim Jong-un, was never likely to rule gently. But isolation—North Korea has few real friends, not even China, which barely qualifies as a frenemy—has left the North essentially under siege. The result is a more repressive (and essentially totalitarian) regime.

Facing the world’s sole superpower alone discourages reforms that might unravel one of the world’s most formidable national-security states. China long encouraged Kim Jong-il to adopt the Chinese model and relax economic controls, but he paid Beijing no heed. He was unwilling risk calling forth the genie of change.

Kim Jong-un, despite a brief educational sojourn in Switzerland, is no liberal. In late October the State Department released a report on human-rights abuses in the DPRK. State noted “extrajudicial killings, forced labor, torture, prolonged arbitrary detention, as well as rape, forced abortions and other sexual violence inside the country.” Brutality doesn’t stop at the nation’s borders: “The government deploys security officials on assignments overseas to monitor the activities of North Koreans abroad and to forcibly repatriate individuals seeking asylum abroad.” Workers sent overseas often endure the status of de facto forced labor.

The Department’s more formal human-rights report stated with sublime understatement that the DPRK’s “most recent national elections, held in 2014, were neither free nor fair.” The people could not choose their government, which “subjected citizens to rigid controls over many aspects of their lives, including denial of the freedoms of speech, press, assembly, association, religion, movement and worker rights. The government operated a network of political prison camps in which conditions were often harsh, life threatening and included forced and compulsory labor.”

The North usually tops the list of religious persecutors worldwide. Explained State, “there was an almost complete denial by the government of the right to freedom of thought, conscience and religion.” The Kim cult is quasi-religious, and the authorities see traditional faiths as a grave threat. Added State, it appears that “the government’s policy towards religion has been to maintain an appearance of tolerance for international audiences, while suppressing internally all non-state-sanctioned religious activities.”

Kim Jong-un, known as the supreme leader, is tougher than his father and grandfather—at least toward his top officials. Kim has executed some 140 members of the elite, including his uncle, long at the center of power. Kim has tightened border controls in an attempt to reduce defections.

Yet he offers one small reason for hope. Kim has implemented substantial economic reforms. It is not capitalism, as his embarrassed officials rushed to assure me on my recent trip. But there are private markets and increased economic autonomy even for state firms. The benefits were evident on the streets of Pyongyang (the countryside remains far more primitive).

Apparently, Kim recognizes that a stronger, more successful DPRK must use the power of market forces. While that does not guarantee reform elsewhere, his father was right to worry that economic liberalization tends to loosen state controls and empower individuals. Moreover, Kim might come to recognize that human creativity, exploration and entrepreneurship are all essential to economic dynamism. Then he will have to choose between economic development and political control, or at least make some compromises, accepting greater risk of dissent.

While the United States has little leverage to force change in Pyongyang—a regime determined to survive no matter what isn’t going to change its political practices at Washington’s request—engagement might create conditions more conducive to an improvement in human rights. Taking steps which reduce the Kim regime’s paranoia and insecurity would eliminate one impetus for tougher repression. While a more secure Kim might feel freer to abuse his population, he would face less pressure to do so from fear of upheaval. Increasing the regime’s sense of security may be a necessary—if not a sufficient—condition for improvement.

Moreover, engaging the North diplomatically would create an opportunity to talk about human rights. Although Pyongyang routinely dismisses human-rights concerns, it has on occasion engaged in talks with U.S. officials on the issue, including over the return of Otto Warmbier, the college student jailed last year. Washington could offer the direct diplomatic contacts which the DPRK long desired, while insisting on a human-rights dialogue as part of the process.

Such a conversation wouldn’t lead to dismantlement of the DPRK police state, but still might increase outside access to North Korea and greater exposure of abuses—and encourage at least modest change. Creating an ongoing dialogue would give Pyongyang a stake in the bilateral relationship and reason to consider concessions.

The North Korean people deserve a transformed government. However, the ability of outside states to influence the DPRK is extremely limited. Refusing to talk to Pyongyang only increased its sense of threat and corresponding incentive to oppress its people. Engagement might fail to shift today’s seemingly hopeless dynamic, but nothing else has worked. With the North becoming a genuine nuclear power, it is time for Washington to try something new.