How Republicans Really Feel About Russia and Ukraine 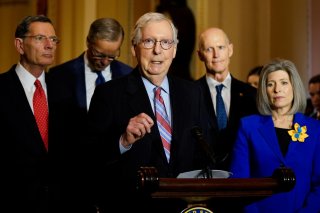 Vladimir Putin’s war against Ukraine has triggered sweeping reassessments of conservative foreign policy opinion within the United States. Leading authorities have argued this represents the death of supposedly pro-Russian GOP “isolationism,” in favor of a liberal internationalist approach. Both halves of that argument reveal a misunderstanding of Republican foreign policy views, past and present.

It would be more accurate to say there’s been strong majority Republican support for some hardline measures against Putin’s Russia, and broad sympathy for Ukraine, alongside continuing discomfort over how far this crisis may escalate. GOP voters, while backing core U.S. alliances, remain ambivalent over many aspects of U.S. activism overseas. That is true of Republican voters as well as Democrats and independents. Whatever burst of support there has been for Ukraine should not be interpreted as a more sweeping conversion to liberal internationalist precepts where such conversion does not exist. Moreover, Republican voters were never pro-Putin or pro-Russia in the first place. A liberal-leaning press has tended to misrepresent conservative GOP foreign policy views for many years now.

Let’s start with some recent polls. According to the numbers, GOP voter opinion on foreign policy remains divided. This includes responses specifically about Ukraine. A significant minority of Republicans lean toward a non-intervention stance on this issue. According to a Yahoo/YouGov poll conducted mid-March, GOP voters are less likely than Democrats to support President Joe Biden’s existing measures against Russia. Most Republicans, like other Americans, are opposed to placing U.S. ground troops in Ukraine. William Saletan, writing at The Bulwark, frames this in ways I would dispute, but one central point of his is correct: a good many grassroots Republicans believe we should pay more attention to problems at home, rather than problems overseas. This was also the finding of some leading polls from last fall, including the October 2021 Chicago Council Survey.

Here, it’s worth noting that a certain ambivalence regarding U.S. intervention abroad is the norm in American opinion, not the exception. The same is true of Democrats and independents. There are limits on what the public will tolerate. Opposition to U.S. ground troops fighting in Ukraine, for example, is a point of bipartisan agreement. That is not “isolationism”; it is simply good sense.

Where Saletan is mistaken, judging from a fuller range of polling results he does not mention, is in the predominant direction of Republican dissatisfaction with the president’s approach to Ukraine. It is abundantly clear that the overwhelming number of Republicans do not approve of Biden’s handling of this crisis. When pressed, however, most GOP voters say they disapprove of Biden’s Ukraine policy in that he has not done enough to push back against Russian aggression. According to a Pew Research Center poll released on March 15, 54 percent of conservative Republicans say exactly that. Another 21 percent say the president has it about right. Only 9 percent of conservative Republicans say that Biden has done too much to stop Russia.

A whole host of polls from the past month back up this central finding. The same Pew survey mentioned above found that 73 percent of Republicans favor working with U.S. allies to respond to the Russian invasion. According to an early March survey conducted by Reuters, an overwhelming majority of GOP voters support a robust set of U.S. measures against Putin’s Russia. Some three-quarters of Republicans support U.S. arms shipments to Ukraine, rigorous economic sanctions, a ban on the import of Russian oil, and the seizure of assets from Russian oligarchs. And according to a Gallup poll released March 14, only 15 percent of Americans view Putin’s Russia favorably. Democrats and Republicans both respond in the same way. There is no real partisan difference on this issue.

At the same time, in cases where Biden has gone overboard—for example by saying that Putin “cannot remain in power,” and thereby implying a U.S. policy of regime change—a significant number of GOP national security hawks have joined with GOP non-interventionists in noting the president’s potentially dangerous rhetorical overkill.

Part of the problem with current reporting, I think, is that a wildly partisan press never really cared to understand Republican foreign policy opinion in the first place. During the Trump presidency, it was almost obligatory for a certain type of journalist to refer to GOP voters as “pro-Putin” or “pro-Russian.” As I pointed out in my 2019 book, Age of Iron: On Conservative Nationalism, based on a close look at polling from the time, the great majority of Republican voters were neither pro-Putin nor pro-Russian, and never had been. Most GOP voters, and for that matter most core Trump supporters, said quite consistently throughout those four years that they supported NATO—and that they had no warm feelings toward Putin’s Russia. But you would never have known this from mainstream reporting during those years. The facts simply didn’t fit the required liberal narrative. And so, they were not reported.

This goes to a broader problem with mainstream liberal academic, think-tank, and journalistic analyses of the Republican Party on foreign policy issues. Most liberals take it for granted that there is one benign tradition of U.S. foreign policy, namely the liberal internationalist approach. Liberals will certainly permit debate between hawks and doves within that one tradition: namely, how, why, and whether to use force overseas for liberal purposes. Liberal hawks (i.e., globalists) debate liberal doves. But honest disagreement from outside the liberal internationalist tradition altogether is treated as a religious heresy, or a kind of emanating darkness, rather than a serious alternative.

The challenge liberals face, though, is that most of the American foreign policy tradition, measured by timespan and long-term impact, is not liberal internationalist. And neither are most Republicans. Liberals appear to have no way of mentally processing this reality without slotting people into one of a few officially approved pejorative categories. As a contemporary conservative, either you are an isolationist or a warmonger. Or better still, an isolationist warmonger. We are already witnessing this type of recurrent, biased reporting in response to the range of GOP foreign policy opinions over the last month.

And yet most GOP voters who disagree with Biden’s foreign policy, like most GOP elected officials past and present, are neither warmongers nor isolationists. Rather, at the beating heart of the Republican Party, going back to its founding, is an intense sense of American nationalism. This has foreign policy consequences as well. Depending on international events, political leadership, and domestic political constraints, Republicans—like most Americans—have cycled back and forth between international activism and non-intervention. One GOP constant, however, has been a jealous regard for U.S. national sovereignty, and for preserving America’s freedom of action in world affairs. As I have tried to suggest in a series of books going back to Barack Obama’s first term, this is what sets conservative Republicans apart from their modern liberal counterparts. Our starting point is not rules-based multilateral world order. Our starting point is America.

Given the stubborn conservative affection for the notion that this is still an independent country, regardless of cosmopolitan dreams for global governance, then your typical GOP voter and your typical GOP leader are not going to sign up for the full menu of internationalist policy proposals as defined by liberals, whether over Ukraine or anywhere else. For example, conservative Republicans are going to continue to view the utterly dysfunctional condition of America’s southern border as a legitimate national security issue. And they are right to do so. This doesn’t mean Republicans won’t also support robust, sensible measures against authoritarian aggression overseas. In fact, we are seeing strong indications of that support right now.

Still, some observers seem baffled by GOP voters’ reaction to the Russian war in Ukraine. This isn’t rocket science: when a smaller, free country is viciously attacked by a much larger authoritarian power, most Americans—including most Republicans—tend to sympathize with the little guy. They look to help if they can, understanding that broader interests may be at stake. At the same time, most Americans—including most Republicans—look to avoid full-blown hostilities with one of the world’s leading nuclear weapons states. That is not an unreasonable mix of concerns. In fact, it sounds about right to me. The whole task of any U.S. president, in such a crisis, is to strike a healthy balance between competing priorities.

The American public seems to be unimpressed by the president’s handling of this crisis. Looking at the polling numbers, we find that Biden’s foreign policy approval rating is low, just as it has been for months. According to RealClearPolitics, as of April 3, his rolling average of support on foreign policy issues stood at just under 41 percent. This is no great strength. Democratic Party strategists let it be known to Politico after the start of the war in Ukraine that they hoped this crisis could be used to rescue their party’s fortunes in the upcoming midterm elections. They must be disappointed.