How Russia’s Invasion of Ukraine Is Rebounding in Iran 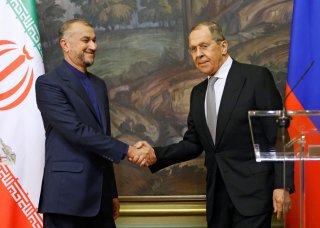 Russia’s invasion of Ukraine has not only dominated global headlines, but also triggered a wide-ranging debate in Iran and among Iranians about Tehran’s ties with Moscow. In a phone call between Iranian president Ebrahim Raisi and Russian president Vladimir Putin, the former told Putin that “NATO’s expansion eastward creates tension and is a serious threat to the stability and security of independent states in various areas. I hope what is happening will benefit peoples and the entire region.” This pro-Kremlin narrative about the purported causes and rationale of the invasion of Ukraine is also echoed by other key Iranian power centers. For instance, the Islamic Republic of Iran Broadcasting is covering news of the invasion with the label of a “special operation,” also a term borrowed from official Kremlin propaganda, and is blaming the West, particularly the United States, for the war for its alleged threat to Russian security. In this vein, Ali Shamkhani, the secretary-general of the Supreme National Security Council (SNSC)—an élite body seen as key for national-security and foreign-policy decisions in the Islamic Republic—tweeted that “when the West seeks to strike at the national security of nations in various ways, it is in fact directly responsible for the wars and crises that are formed in order to resist the West’s strategy.” Such a portrayal also serves to justify Iran’s own policies, namely its “axis of resistance” across the Middle East that is also purportedly resisting Western policies that are seen as destabilizing Iran’s immediate neighborhood. Moreover, Friday Prayer Imams, who are directly appointed by Supreme Leader Ali Khamenei, raised their voice, suggesting that the West ought to be blamed for what is at play in Ukraine.

In another layer of Iran’s official discourse about Russia’s war on Ukraine, it is claimed that this would be another instance demonstrating the decline, if not collapse, of U.S. power. Ahmad Khatami, an influential hardline cleric and Tehran’s Friday Imam, claimed that the war in Ukraine is a result of U.S.-led NATO provocations against Russia, adding that the war has demonstrated that the United States is unjustly referred to as a superpower. The same view was uttered by Minister of Intelligence Esmaeil Khatib, who blamed the war on NATO’s eastward expansion and also interpreted it as a failure of the United States to reclaim its superpower status. “[W]e have seen that the United States has left Iraq, Afghanistan and Syria with humiliation and shame, despite all the costs it has incurred,” he added. “If NATO had the necessary power, the United States could show itself in Afghanistan and Yemen, but we are actually seeing the weakening of NATO allies in West Asia.” Khatib also claimed that NATO’s aim in regard to Ukraine becoming a member is meant to establish a military blockade against Russia and China.

And even more recently after Russia tabled its controversial request in Vienna, which was seen as undermining Tehran’s interests, hardliners close to the supreme leader expressed support for Russia. “In the Ukraine war, the West was plotting to trap Russia, but Putin was smart and took the initiative,“ said Mohammad Mohammadi-Golpayagani on March 9, the chief-of-staff of the Supreme Leader’s Office (Beyt), a quasi-parallel government in the Islamic Republic, who also described Western countries to be a symbol of “modern ignorance” and intended to “tear” Ukraine apart. On the same day, members of the Assembly of Experts, a body tasked with appointing the supreme leader, released a statement that blamed Ukraine for having initiated the current war and said that “Unwarranted trust of Ukrainians toward the West and [their] voluntary disarmament because of empty U.S. guarantees was a lesson for other countries.”

Right after the start of the invasion, the Russian Embassy in Tehran lambasted the reporting of the Islamic Revolutionary Guard Corps-affiliated Tasnim News Agency that in its English edition had used the word “invasion,” calling it “fake news.” The embassy’s tweet, however, is not available anymore. It seems that after the Russian Embassy’s intervention, the Tasnim article in question is no longer available. Instead, there is one article that reports about the start of the war, exclusively following Moscow’s official narrative. About ten days earlier, the Russian Embassy on Twitter lashed out against another article, this time by the reformist Aftab-e Yazd, saying it would be a provocation and undermine bilateral ties. Now, amid the ongoing invasion, Russia’s ambassador to Iran called upon Iranian media to use the phrase “special operation,” saying “this is not a military attack.”

In fact, there is widespread mistrust in Iran toward Russia. In a rare occasion of dissent on Iran’s official media, Hassan Beheshti-Pour, an international politics expert, appeared on the Islamic Republic of Iran News Network (IRINN, Shabake Khabar) and criticized any Iranian blank-cheque support for the invasion. He also called into question both the legality (with Moscow circumventing the UN Security Council) and legitimacy (regarding Moscow’s claim that Ukraine would be part of Russia and would therefore need to be reintegrated) of Russia’s war. He further questioned Iranian official media refusing to call Russia’s military invasion a war, pointing out that the latter is very obviously happening with many Ukrainians already displaced. Instead, Iran should recall the reasons for its stance of neutrality in Iraq’s 1990 invasion of Kuwait, and adopt the same position in the current conflict, which means taking a critical stance vis-à-vis both Russia and U.S. or NATO policies. He also warned that “There is no guarantee that Russia will not invade Iran one day.”

Also, similarities between Russian and Iranian propaganda were highlighted. Sadegh Zibakalam, a prominent University of Tehran political-science professor and Iranian public intellectual, tweeted: “In the end, did it turn out that Putin was right or the Westerners? For months, the West had been saying that Putin was going to attack Ukraine, and Putin was accusing the West of lying. Putin’s words in ordering the attack on Ukraine were interesting. He blamed ‘the Western Satan’ for this situation. The literature that Iranians have been familiar with for 43 years.”

At the societal level, dozens of Iranians staged an anti-war protest in front of the Russian Embassy, chanting “death to Putin” (“marg bar Putin”), with a synonym of this slogan being sprayed on the embassy’s walls reading “down with Putin.” Despite this small number of protesters in the mega-city of Tehran, it is important to note that protesting in front an embassy seen as a principal supporter of the regime can also pose risks for those protesting.

With the bulk of the international community condemning Russia’s invasion of Ukraine, the Islamic Republic echoed Russian war propaganda, despite some cracks in the official media’s coverage of the invasion and widespread societal distrust toward Russia. The Russian Embassy’s attempt at censoring Iranian coverage of Russia seen as negative is a powerful reminder of Moscow’s influence over Iran given the sheer asymmetry of power between the two. In fact, over the past years, the Chinese Embassy had engaged in these very same measures, even criticizing Iranian authorities’ statements toward Beijing seen as too critical—and was also successful in doing so.

Meanwhile, Iranian authorities, at least in their initial reactions, believe they can take advantage of the war in Ukraine in three ways: First, the Raisi administration has vowed to boost Iran’s relationship with Russia and China under the banner of a so-called “look to the East” foreign policy. Now, with most countries taking a stance against Putin’s invasion of Ukraine, Iran hopes that its support for Moscow’s war narrative could serve as a great opportunity to build the strategic partnership it envisages with Moscow. Tehran needs the Russian political support against the United States, considering anti-Americanism being one of the Islamic Republic’s most indispensable pillars. Therefore, Iranian officials sought to send a signal to the Kremlin that they always speak and act in favor of Russia, even in a most difficult situation for Moscow—a kind of self-serving anticipatory obedience. As such, Iran’s pro-Putin stance is seen as part of the Islamic Republic’s long-term strategy to invest “in the East” and thereby gain future Russian support for the regime’s survival in Tehran. However, Tehran’s dependence on Moscow and Russia’s past opportunistic behavior toward Iran suggests that such transactionalism is far from assured.

Second, Moscow’s invasion of Ukraine has been perceived by the Islamic Republic as another strong signal that U.S. power is in free fall. Iran’s official media have spread the key narrative that the United States failed to support Ukraine, highlighting that a relationship with Washington cannot bring security and prosperity. For more than four decades, the Islamic Republic has claimed that the United States cannot provide other countries (especially its U.S.-allied Arab neighbors) with security, peace, and development, thereby stressing that Washington is not trustworthy. For Tehran, the Ukraine episode showcases another instance of the Biden administration’s weakness as it failed to protect Ukraine against Russian aggression, in line with the latter’s chaotic withdrawal from Afghanistan in August 2021. This has strengthened Tehran’s belief that it, too, can defeat U.S power and that its expansive regional policies are unlikely to meet much military opposition from Washington.