How Russia Made America Pivot Back to Asia 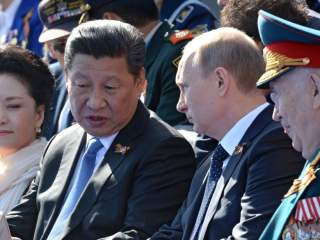 The global news cycle changes in an instant. Europe dominates media coverage one week, while the Middle East captures attention the next. Although immediate challenges stemming from both these regions are critical to international security, the United States should not favor the short-term to the exclusion of the long-term. Washington must not forgo strategic planning in favor of crisis management.

This dichotomy is particularly pertinent as Russia manages to straddle these two spheres, precipitating immediate crises and investing in future partnerships. Despite renewed turmoil in Europe and continued instability in the Middle East, therefore, American policymakers cannot afford to neglect the Asia-Pacific and the increasing role that Russia is playing there. Home to vibrant economies, emerging powers and more than half the world’s population, the region holds significant economic promise. Yet there are real perils and potential challenges that require careful attention.

With those in mind, Washington is pursuing a strategic “rebalance” or “pivot” to the Asia-Pacific. Designed to (re-)position itself to the most dynamic region of the twenty-first century, the initiative thus far has largely been a military one, combining elements of deterrence and reassurance to manage the United States’ relationship with the Asia-Pacific’s dominant actor, China.

More recently, however, it is not only Beijing’s actions that should concern American policymakers. Russia is developing a closer defense, economic and energy relationship with China and other countries in the region. Although this burgeoning Sino-Russian partnership is not a panacea for each country’s woes, it is a particularly convenient one as Moscow secures both alternative export markets and political influence, and Beijing counters the United States’ reluctance to craft a new world order favorable to China. In light of this newfound entente and Russia’s strategic shift eastward, the Asia-Pacific presents new challenges that were not as salient when the United States first announced the rebalance.

From a security perspective, Beijing and Moscow are taking actions that could threaten American interests and those of its allies and partners. In particular, Russia plays a key role in China’s military modernization, providing the country with advanced missiles, radar and other systems that are central to Beijing’s acquisition of anti-access/area denial (A2/AD) capabilities. Just last year, both countries finalized a deal on a long-range S-400 surface-to-air missile system. Although short on details, the deal represents an important milestone in their relationship: China will become Russia’s first foreign recipient of the advanced system. For years, Beijing lobbied Moscow unsuccessfully to acquire the S-400 and was rebuffed by Russian officials due to concerns over China’s track record of reverse-engineering other weapons systems. Within the last few weeks, however, Russian media reported that Moscow will deliver the system to China in either twelve or eighteen months. This move will likely lead American allies and partners, particularly Japan, to fear the growing A2/AD threat in the Asia-Pacific, raising the costs for Washington to respond to future Chinese actions.

A deeper Sino-Russian entente also risks undermining the ability of the United States to project economic and financial power. Sanctions on Russia imposed by the West, for example, have squeezed Russia’s external borrowing by forcing sanctioned corporations to seek emergency funding from the Russian government, thereby drawing down Russia’s sovereign reserves. Sino-Russian cooperation in the financial sphere, however, can mitigate these effects. In 2014, Moscow and Beijing signed a currency swap agreement worth $24 billion, a move intended to reduce Moscow’s reliance on the dollar and promote the international use of the Chinese renminbi. Another pact encourages billions in Chinese financing to cash-strapped Russian companies through cooperative measures between the China Construction Bank Corporation and the Russia Direct Investment Fund. Although Chinese banks have been relatively reluctant to meet Russia’s demand for financial assistance, the prospect for desperate Russian firms to turn to Beijing for fresh capital could challenge the financial leverage of the United States and its allies. Overall, financial cooperation between the two countries helps project a weaker image of the United States, particularly regarding the role of the U.S. dollar in global markets.

The Sino-Russian entente and the fresh challenges it presents underscore the need for the United States to sustain its focus on the region and broaden the rebalance. Washington should first establish a clear interagency approach to best utilize American diplomatic, financial and military power. It should consider Russian aggression beyond Moscow’s actions in Europe and the Middle East, but also in the Asia-Pacific. Such a move would allow all agencies, from the Department of Energy, to State and Defense, to Justice, to play a clear and coordinated role in mitigating Russian assertiveness. Beyond Washington, it would enable the United States to engage its allies and partners across all three regions in various trilateral or multilateral dialogues, engagements and exchanges. Russia’s interest in the Asia-Pacific region should be viewed as just one element of a larger strategy.

Facing an increasing demand for American resources and commitment, many Washington policymakers view the Asia-Pacific as just one of the many regions around the globe that requires attention. Yet the dynamism of the Asia-Pacific and the prospect of a closer Sino-Russian relationship will fundamentally shape the international economy and global stability in the twenty-first century. The U.S. rebalance provides a unique opportunity for the United States to respond proactively to arising challenges. Washington must not let this opportunity slip away.

Michelle Shevin-Coetzee is a researcher at the Center for a New American Security, where Axel Hellman is a former Joseph S. Nye, Jr. National Security intern.