How Russia Plans to Save Its Massive Military Buildup 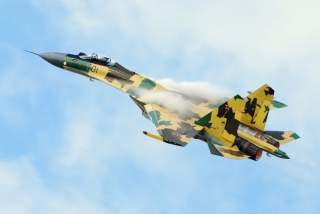 The announcement that Russia is planning to lift its self-imposed ban on selling the advanced S-300 air defense system to Iran gives us an important insight into how Moscow plans to move ahead with its ambitious plans to modernize and reequip the Russian armed forces.

Initially, the rearmament plan announced by President Vladimir Putin was to be funded from the golden river that was generated by the taxes on energy exports that had helped to fill the Kremlin's coffers. The collapse in world energy prices over the past year (as prices have gone down, the amount of the windfall tax collected has also contracted)—coupled with the recession Russia is now undergoing (with its economy expected to contract by at least 3 percent in 2015), has diminished the resources available. The Defense Ministry expects to cut military spending by 3.8 percent—less of a haircut than what other ministries and departments must slash (generally 10 percent of their budgets)—but it will be a test as to whether the Russian defense industry can mitigate the impact of any reduction by finding greater efficiencies. A forthcoming test will be whether the chassis for the 5th generation tank the T-14 Armata can be used as the basis for other new vehicles such as armed personnel carriers and self-propelled artillery, simplifying production and cutting down on maintenance costs. There will also be pressures to cut costs for procurement by holding the line on salaries—which, paradoxically, may not produce labor unrest as the deteriorating economy makes it less likely professionals would be able to easily switch into other, higher-paying jobs.

A number of experts have predicted that, with less revenue coming in, and increasing pressure to shift spending towards social welfare needs as a way to tap down the bubbling discontent that has been generated (particularly as food and consumer goods prices have been going up over the past six months), the ambitious defense plan would have to be scrapped. However, there is no such willingness on the part of the Putin administration to junk these plans. Instead, the emphasis is on finding ways to get through the rough patch of the next two years and then, after the expected economic recovery (especially on the assumption that critical European sanctions will have been largely rolled back by 2016), resume implementing the plan.

A trend that was already visible six months ago is a willingness to stretch out the timetable and to accept delays as to when the defense program will be completed. Some have argued that the program will have to be extended by five years and that targets will not be achieved until 2025. Certainly, a slowdown allows for greater flexibility and gives the Russian economy more of a chance to recover. A longer timetable, however, would also mean reducing purchases in any given year—and thus the Russian defense industry, if it cannot rely on state orders (nor, given the condition of the Russian budget, state subsidies), must seek alternate ways to finance its operations.

So the strategy shifts from relying on domestic orders to increasing arms exports to generate the necessary income to finance the defense buildup. To keep factory lines operating and to pay for research and development, the Russian defense industry needs to find customers for its newest products until such time as the Russian government has more funds to increase its purchases and so be able to carry the programs largely on the basis of domestic orders.

Export sales are critical because the Russian military, as it retires old and dilapidated equipment, may not immediately replace it with the newest (and more expensive) designs but is likely to continue to order more cost-effective 4th generation equipment. Thus, for every obsolete tank or fighter being taken out of service, another T-90 or Su-35, rather than a next generation T-14 Armata or the Sukhoi PAK FA T-50, will be ordered. This has the benefit of replacing ageing equipment with new machines—but utilizing pre-existing designs and factory lines so that defense rubles can be stretched further.

Despite sanctions, Russia saw a slight increase in the volume of its arms exports business in 2014. To some extent, the "new world disorder" that we are facing is a boon to the Russian defense industry. The rise in tensions between the United States and China has been a major spur in Beijing's interest in increasing its purchases from Russia, while, paradoxically, the rise of China itself, which is unsettling to its neighbors, causes those states, such as Vietnam and India, to increase their own defense spending. Russia thus remains attractive as a source for high-end weaponry—and in the case of India, a partner that can provide both financing and technology for use in the Russian military-industrial complex. Instability in the Middle East drives purchases from Iraq, Iran and Egypt. To the extent that the United States is seen as an unreliable provider of security, the desire of a number of countries to hedge their bets by purchasing weapons from Russia accelerates. As a result, Russian defense executives are cautiously optimistic in the prospects of their industry to not only maintain but expand the volume of sales and so ensure a steady income stream that can keep their factories humming and their design bureaus employed. Russia now enjoys a 29 percent share of the global arms trade, a percentage that has steadily increased over the last decade.

If current trends hold, Putin can move his defense program into a short-term holding pattern, slowing down some of the plan's implementation but without having to halt modernization altogether. For those who expected that sanctions and the fall in energy prices would tame the bear's claws, think again.