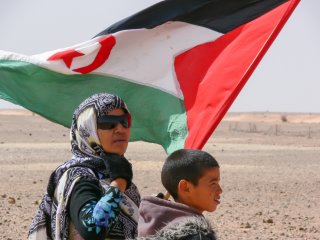 My generation of Sahrawis grew up believing in the United Nations-led peace process. In 1991, the Sahrawi national movement, led by the Polisario, suspended the armed struggle it had waged against Morocco since it occupied Western Sahara in 1975. In exchange for a ceasefire, Rabat agreed to a UN-organized referendum that would allow the Sahrawi people to decide how they wanted to fulfill their right to self-determination.

We long maintained hope in a diplomatic agreement to end the conflict. But after thirty years of stalemate with no referendum in sight due to Rabat’s opposition, we now feel that diplomacy and international law are empty words. We used to believe in peace. The Polisario made a huge compromise by agreeing to pursue national liberation through negotiations. But all this achieved was to allow Morocco to deepen its hold over Western Sahara with the military and diplomatic support of the United States and the European Union (EU).

Today, we feel forgotten and betrayed. The West claims to be committed to international law and human rights. Yet, from our perspective, these so-called values are nowhere to be seen. Instead, the United States recognized Moroccan sovereignty over Western Sahara while the EU bent international law to justify the territory’s inclusion in its trade agreements with Morocco without our consent. By siding with Morocco and its plundering of our natural resources, we see Washington and European capitals as complicit in Morocco’s violation of Sahrawi rights.

Instead of the self-determination promised to us, we are now a minority in our own land due to Morocco’s settlement policy. Under Moroccan occupation, Sahrawis are denied their national and cultural identity, reflecting Rabat’s opposition to anything that connects the native people of Western Sahara to their territorial roots and national heritage. As leading international human rights organizations have documented, Moroccan authorities regularly commit human rights abuses by targeting Sahrawis who voice pro-independence views with arbitrary house arrests, beatings, and harassment.

Meanwhile, over 173,000 Sahrawis live as refugees in Algerian camps, suffering from protracted water and food insecurity issues. Decades of emergency food rations distributed by aid agencies have caused malnutrition among women and children and higher-than-average rates of cancer. Sahrawi refugees must also confront the growing impact of climate change in a desert region.

In the current context, peace serves only Morocco’s interests, leaving it free to exploit our territory without cost or consequence. After decades of unkept international promises and without tangible diplomatic achievements, many Sahrawi youths are now committed to resuming the armed struggle against Morocco. This comes at a tremendous personal cost. My brother and five of his friends joined the Sahrawi army after fighting resumed against Morocco in November 2020. Last month, they were hit by a Moroccan drone strike. My brother was the only one left alive.

We may not win the war. But at least Morocco is also losing men and financial resources due to daily attacks by the Polisario against the Moroccan-controlled Berm, a 2,700-kilometer-long sand barrier dividing Western Sahara from north to south. Violence appears to be the only way to draw attention to our cause.

Given the lack of positive change from Rabat and the international community, this week’s Polisario General Congress, which brought together over two thousand Sahrawi representatives, has called for further escalation. The re-election of Brahim Ghali as Polisario secretary-general is a further indication of the Sahrawi people’s support for the current strategy of military confrontation against Morocco.

My family was originally from the town of Mahbes in Western Sahara. Like thousands of Sahrawis, they fled Moroccan violence and sought refuge in neighboring Algeria. We dream of returning to our lost land. My family thought it would only be a matter of months before they could return home. Sadly, it has now been almost fifty years of exile.

This is also a fight about our identity and place in the world. We Sahrawis completely reject Morocco’s autonomy proposal, which would integrate Western Sahara into Morocco under the guise of devolved governance. This plan has gained traction in some international quarters, including, most recently, the Spanish government, which described it as “the most serious, realistic, and credible [basis] for resolving the dispute.” In truth, Morocco’s autonomy plan is none of these things. My generation does not want to be Moroccan or live in an undemocratic system that does not represent us as Sahrawis and represses our human rights and national identity.

If given the chance, a majority of Sahrawis would vote for independence. Finding an outcome that satisfies both the Sahrawi people's aspiration for freedom and Morocco’s expansionist ambitions is therefore neither realistic nor just. Instead, we want to be able to choose our people’s future in a referendum and build a modern democratic state of our own. This remains the only credible and durable solution to the decades-long conflict.

Najla Mohamedlamin is a Sahrawi refugee and civil society activist focusing on climate justice and women’s rights. She lives in the Smara refugee camp in southern Algeria and is the founding director of the Almasar Library Center, which educates Sahrawi women and children about health and the environment.