How Saudi Arabia Can Go Nuclear (But Prevent Proliferation) 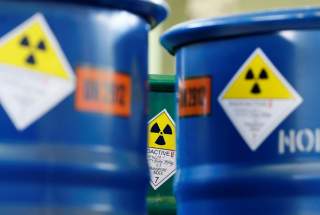 Renewed interest in nuclear cooperation between the United States and the Kingdom of Saudi Arabia (KSA) has relaunched debate over whether Washington should insist upon a legally binding “gold standard” commitment from the KSA that forecloses Saudi deployment of sensitive nuclear fuel cycle technology.

The KSA aims to eventually enrich uranium itself. Riyadh might mine its own uranium, but without any enrichment infrastructure currently, where would it obtain enough help to enrich uranium for power reactor fuel?

Every country that has developed enrichment technology for that purpose belongs to the Nuclear Suppliers Group (NSG), the world’s most important nuclear export control body. Its guidelines on sensitive transfers contain red lines and urge states to exercise restraint. These guidelines today also inform decision-making by Israel, India, and—notably—Pakistan, a state frequently cited by some observers as likely to divert nuclear know-how to Riyadh.

What the NSG Rules Say

In response to 9/11 attacks, and to proliferation of Pakistan’s nuclear technology, in 2011 the NSG specified conditions that countries must meet to receive sensitive transfers. Henceforth, a recipient must be a party to the Treaty on the Non-Proliferation of Nuclear Weapons (NPT), comply with a comprehensive safeguards agreement with the International Atomic Energy Agency (IAEA), not be subject to suppliers’ denial notifications, implement United Nations Security Council resolution commitments to prevent proliferation, and not be subject to IAEA resolutions seeking demonstration that nuclear activities are peaceful.

The guidelines also urge suppliers to forbid retransfer, replication, and sharing of sensitive technology, and to commit recipients to limit enrichment levels, provide for adequate physical protection, and apply IAEA safeguards in perpetuity. Beyond that, the NSG counsels suppliers to authorize transfers only when they are satisfied that the transfers will not contribute to nuclear weapons proliferation or nuclear terrorism.

The KSA would not, therefore, be explicitly disqualified by NSG rules from obtaining sensitive technology from its members; the decision to transfer these would be a judgment call by supplier states. But without Riyadh demonstrating an effective nonproliferation track record, including export controls and IAEA verification (including through an Additional Protocol), no responsible supplier state would agree to transfer enrichment or reprocessing items to the KSA. Suppliers would consider the region’s legacy of conflict, as well as nuclear, missile, and chemical weapon proliferation, along with Riyadh’s bitter rivalry with Tehran. NSG members know that Saudi officials have justified their interest in enrichment, referencing Iran’s nuclear build-up and absence of a nuclear weapons-free zone in the Middle East.

Pakistan, the KSA and the NSG

Media reports are peppered with unconfirmed assertions of past interactions between the KSA and Pakistan, including concerning matters of Pakistan’s nuclear development. These include allegations that the KSA funded Pakistan’s nuclear program, that a KSA defense minister met with Pakistani nuclear physicist A.Q. Khan two decades ago, and that Islamabad might in the future provide Riyadh with nuclear weapons under a previously concluded secret pact. In light of the above regional background, to suggest that NSG governments are wary of Pakistan-Saudi nuclear commerce would be an understatement.

Pakistan is enriching uranium, separating plutonium and building nuclear weapons using these materials. Pakistan is not an NPT party and thus not obligated by it to restrict its nuclear commerce with other states. Pakistan’s past failure to protect its nuclear assets might encourage the KSA and others to seek enrichment or reprocessing assistance from Pakistan.

But, the NSG guidelines should dissuade Pakistan from aiding the KSA. In 2016, Pakistan notified the NSG that it is implementing the group’s guidelines. Pakistani officials say that this means that Pakistan will not transfer enrichment and reprocessing items to the KSA. Islamabad’s own updated rules state that “there is a strong presumption of denial in case of enrichment and reprocessing technologies.”

Pakistan took these steps in the course of five years of enhanced engagement with the NSG. In 2010, the United States announced that it would support India’s bid for NSG membership. The aim of Pakistan’s accelerated outreach was to ensure that any conversation in the NSG about Indian membership would also include consideration of Pakistan. Islamabad established a program to implement the NSG guidelines as part of its effort to rehabilitate its image and its nonproliferation practices after A.Q. Khan’s activities were exposed in 2004.

Today, NSG members are considering membership for both Pakistan and India for at least one very compelling reason: to encourage states with sensitive nuclear technologies to implement the NSG guidelines, thereby contributing toward the NSG’s effectiveness.

In theory, Pakistan in the future could change its policy and not implement NSG guidelines. In practice, the potential that Pakistan might in future not implement the guidelines could be viewed as a form of Pakistani leverage to gain membership. That might also imply that a future NSG decision not to admit Islamabad would run the risk that Pakistan may again proliferate.

But any future confirmation by suppliers of undisclosed, sensitive Pakistan-KSA nuclear cooperation might disqualify Pakistan for NSG membership on grounds, expressed by the NSG’s outreach documents, that an important condition is “enforcement of a legally based domestic export control system that gives effect to the commitment to act in accordance with the guidelines.” A breach of the guidelines by Pakistan or any NSG member would not carry penalties since states’ adherence is voluntary. But, powerful suppliers would likely bring the matter into the UN Security Council; without effective resolution by Islamabad and Riyadh, punitive sanctions against both states might follow.

The NSG guidelines reduce the risk that the KSA will enrich uranium or separate plutonium. Riyadh’s interest in acquiring enrichment technology underlines the NSG’s aim to have both India and Pakistan inside the tent. This outcome might be encouraged by a recent trend toward geopolitical opportunism among powerful supplier states concerning membership: If China and its ally Pakistan do not want India alone to be admitted to the NSG and to the Security Council as a permanent member, they should make sure that Pakistan’s sensitive nuclear assets do not find their way to the KSA (or elsewhere).

On this basis, for the United States to insist that the KSA legally ban enrichment and reprocessing as a condition of nuclear cooperation might be counterproductive to U.S. nonproliferation objectives, especially if Riyadh will not agree to it.  Implementation of the NSG guidelines by all members plus India, Israel, and Pakistan, would imply that Riyadh would have just one possible partner to develop an enrichment infrastructure: North Korea. Were U.S.-KSA nuclear cooperation to require Riyadh having an Additional Protocol but not having to legally foreclose future nuclear fuel cycle options, the United States would be in an enhanced position to engage the KSA over its fuel cycle future as well as over any willingness by the KSA to assume the national security risks and consequences that would follow from nuclear cooperation with Pyongyang. This U.S. approach would also be fitting should Riyadh not aim to quickly establish fuel cycle capabilities but instead proceed prudently to cover its reactor fuel requirements.

Mark Hibbs is a senior fellow in the Nuclear Policy Program at the Carnegie Endowment for International Peace.​

Image: Barrels with uranium oxide are stored at the Ulba Metallurgical Plant in the northeastern industrial city of Oskemen (Ust-Kamenogorsk), Kazakhstan May 26, 2017. REUTERS/Shamil Zhumatov