How to Save U.S.-Pakistan Relations from the Brink of Disaster 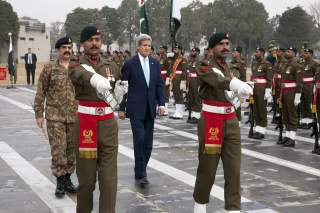 War between the United States and Pakistan is imminent, if one goes by the talk in DC at every other forum on the subject. There is a strange tendency in think-tank and policy circles to sensationalize U.S.-Pakistan relations, at times giving the bilateral relationship far more significance in U.S. foreign policy discourse than what it deserves. In the midst of the frenzy in U.S.-Pakistan relations, there is a serious need to ask what exactly has gone wrong beyond the over-discussed and obvious “trust deficit,” “Haqqani network” and the “transactional” nature of the relationship—all of which is the product of the underlying problem, not the root cause.

The answer might be less sensational, and have more to do with bureaucratic failure in the relationship. Based on my experience in the government of Pakistan, and through interviews with key civil and military officials in Pakistan and discussions with American officials, I have been able to flesh out what drives U.S.-Pakistan relations to the edge—those little bureaucratic things that don’t come to the surface and are not so interesting to discuss at forums.

The first issue is ruptured communication and messaging on both sides, which leads to misplaced expectations, double-talk and unneeded suspicion. It almost appears that U.S.-Pakistan relations suffer from a chronic oversized bureaucracy that is unable to coordinate messaging—not just between the two countries, but also between the institutions within the two countries, driving relations to the edge over every strategic or ideological clash in the war on terror. Officials on the Pakistani side complain of receiving mixed signals from the United States, with the State Department saying one thing and the Pentagon saying another. Officials cite how within the span of a single day, different branches of the U.S. government have a different take on Pakistan’s role in the war on terror, fluctuating anywhere from “appreciation” to “do more” and “backstabbing.” Moreover, lack of clarity on America’s Afghan peace strategy, according to senior Pakistani military officials, also creates a communication gap that quickly escalates into suspicion. Lack of clarity on aid is also a concern, where the U.S. Congress takes Pakistan to task for taking so much money and not delivering enough, without going into the details of how much aid actually gets delivered to Pakistan and what really is its effectiveness. Too much talk on aid and pressing Pakistan on the subject is another irritant that constantly puts Pakistan on edge while raising expectations in the United States.

The sentiment is the same on the American side, which finds itself frustrated over Pakistan’s duplicity. The frustration is not only due to Pakistan’s support for the Haqqani network, but even more so because Pakistan has been going in circles over its position on the Haqqani network for a long time. Pakistan’s complete silence regarding its obvious support for the Haqqani network has not only allowed the lobbies in Washington, DC, to frame Pakistan as directly involved in the loss of American lives, but more importantly convinced American officials not to expect honest talk from its major ally in the war on terror. The absence of blunt and candid conversation between the two sides has immensely complicated the relationship, which now requires a full reset. It is deplorable that the United States and Pakistan, engaged together in a long war, have ceased to talk and listen to each other directly and instead either rely on intelligence snooping or else let think-tank reports and discussions build perceptions about each other. There may be a need for both sides to have a track 2 dialogue, to bring the governments back to the same page and build trust measures.

The second issue in U.S.-Pakistan relations is a result of serious political and bureaucratic failures by the government of Pakistan, which lacks a vision and policy for its relations with the United States. While the United States has a clear policy and knows exactly what it wants from Pakistan—to ensure its support in Afghanistan, reduce the risk of nuclear fallout and push the government to eliminate militancy in its borders—the government of Pakistan does not know what it wants from its relations with the United States, both in the long term and the short term. Given the fact that America has been Pakistan’s closest and oldest ally, having no extensive policy on the United States from the civilian political leadership and the bureaucracy is a reflection of incompetency. The only strand of policy on the United States is that developed by the Pakistan military in the context of security and the ongoing war. However, even that policy is little more than a wish list of F16s, hardware and other equipment, with a vague sense of how to enable American support against India and Afghanistan. Period.

U.S.-Pakistan relations are bound to remain turbulent and transactional in nature, not because both countries want it, but mostly because the government of Pakistan is unable to come up with a strategic plan to engage the United States on the civilian front and change the discourse from matters of security to economics and trade. Pakistan, as a smaller partner in this relationship, has to drive and push for its national interests vis-à-vis the United States instead of the United States having to educate the government of Pakistan on what Pakistan’s national security and economic challenges are. The reversed role that the United States has been playing is well exemplified in the shape of the Kerry-Lugar-Berman Bill—an American attempt to help Pakistan develop a good five-year deal to develop itself.

The lack of homework on Pakistan’s side regarding its policy on the United States, and the overwhelming expectations to deliver from the American side, set the two countries off-balance on an already delicate relationship that is tied to Afghanistan.

The third, and perhaps trickiest, issue is the lingering past and irritants that shape the mindset on both sides. The Pakistani establishment is still overly cautious in its relations with the United States due to its past experience of being abandoned at the end of the Cold War and thrown under the bus by the United States with the enforcement of the Pressler Amendment. There is a genuine sentiment in the Pakistani establishment and the public at large that the United States is going to withdraw from Afghanistan in haste, and abandon Pakistan to deal with the mess alone. Pakistan’s move to bring China into the Afghan peace process is precisely out of that concern: to have a backup in case the Americans lose patience and abandon the region. No amount of assurance has been able to convince Pakistan that the United States is likely to stay in the region and is interested in a long-term alliance with Pakistan, especially when messaging from the U.S. Congress continues to be dominated by threats of sanctions and putting Pakistan on the State Sponsor of Terrorism list.

Then there is a constant irritant in the form of F16s, which have become a domestic symbol of American duplicity in Pakistan. Given that there is an impasse on the issue, Pakistan needs to leave the matter behind and move on. At this moment, Pakistan needs to reduce as many irritants as possible, in order to strengthen its relations with the United States. On the part of the United States, it may also have to let go of the irritants it faces, which include Pakistan’s previous efforts to cut deals with militant groups to prepare for a political settlement, which the Americans have seen as Pakistan playing a double game.

The fourth and last major issue is that of timelines—essentially the pivotal issue that leads U.S.-Pakistan relations to rock bottom. Given that there is a lack of communication and differences in strategic interests, the challenge, according to almost all the military officials I interviewed in Pakistan, has been to get America to agree on timelines. According to senior military officials in Pakistan, the U.S. war against terrorism has been a victim of American domestic electoral politics and timelines. The U.S. strategy in the war has been to get quick results and move on, while Pakistan has continued to advocate a long-term strategy that included a quick political settlement with the militant groups, which the United States resisted to accept for a long time. The issue of timelines is still a major thorn in the relationship, with the Pakistani establishment viewing the killing of Mullah Akhtar Mansour in a drone strike as a U.S. attempt to speed up the process because it was pressed on its own timelines. As one senior Pakistani military general commented, “Wars are not won during lunch breaks. It is won with patience that the American side lacks.” If the two sides can agree on timelines, U.S.-Pakistan relations can show significant improvement.

While the think tanks and the media in Washington and Islamabad predict a total collapse in U.S.-Pakistan relations due to an impasse over the Haqqani network and other issues, the relationship has endured for over six decades, with a history of close cooperation on matters of security and intelligence. Relations are suffering, not because of the inherently different interests or evil designs between the two countries, but mostly because of the bureaucratic and logistical issues that have risen due to deep engagement in a long war that is nowhere near its end. In such circumstances, constant review of relations and blunt dialogue is needed between the two sides to be able to remain on the same page, avoid suspicion and, if need be, be able to reset relations to achieve their common goal.

Hussain Nadim is currently the Senior Pakistan Expert at the United States Institute of Peace. Previously, he worked in the government of Pakistan as an advisor on security, foreign policy and development. He tweets @HNadim87.

Image: U.S. Secretary of State John Kerry participates in a wreath-laying ceremony at the General Headquarters of the Pakistan Army. Flickr/Department of State