How Should the Next President Use Military Force? 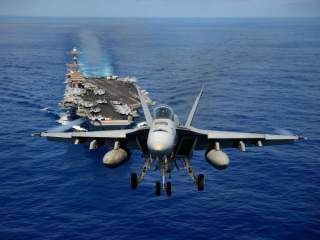 The race for the White House is sharpening the debate about how the next president should use America’s formidable military power. There will no doubt be calls to use military force—to remove ruthless dictators, prevent humanitarian catastrophes and support democratic uprisings. Crises will arise in the Middle East as the Arab Spring continues to unwind. What should the next commander-in-chief do?

Hold your fire. Cool your jets. Keep your powder dry. As much as it may seem “tougher” and more “presidential” to use U.S. military force, recent history tells us that keeping it in the holster may be the best thing to do in the long run to improve regional and global security. If the Iran nuclear agreement taught us anything, it’s that diplomacy can bear great fruits for peace and security. And as we learned the hard way in Iraq and Libya, military interventions have an alarming way of coming out all wrong.

As retired general and former secretary of state Colin Powell put it last year, “as we learned, especially in Libya, when you remove the top [leadership] and the whole thing falls apart, there’s nothing underneath it [and] you get chaos.” Advising President George W. Bush about war in Iraq, Powell famously warned, “You break it, you own it.”

These are crucial lessons for the next president to understand. Yet it’s not clear that all of the candidates have fully grasped them.

Donald Trump says that the United States should not have intervened in Iraq or Libya. Yet his testosterone-soaked plan for dealing with Islamic State terrorists raises concerns that he might stumble into military entanglements of his own. “I would bomb the shit out of them,” he said last year. As an open letter from more than fifty Republican national security experts put it, Trump “swings from isolationism to military adventurism within the space of one sentence.”

Similarly, Hillary Clinton said last year that, “Like President Obama, I do not believe that we should again have 100,000 American troops in combat in the Middle East.” Yet she supported U.S. military intervention in Iraq (as a senator) and Libya (as secretary of state), and is calling for more aggressive action in Syria, such as a no-fly zone and arming rebel forces. She said in November that the United States should “impose no-fly zones that will stop [Syrian dictator Bashar al-] Assad from slaughtering civilians and the opposition from the air.”

Senator Bernie Sanders, who voted against the Iraq war while in the House, takes a more non-interventionist tack. As he said in November, “if you look at history. . . these toppling of governments, regime changes have unintended consequences. I would say that on this issue I'm a little bit more conservative than [Clinton].” Sanders has called for a new foreign policy “that does not get us involved in perpetual warfare in the quagmire of the Middle East.”

And then there is Senator Ted Cruz, who said he would “carpet bomb” terrorists “into oblivion.”

Tough talk at election time is nothing new. But given the history and the stakes, we need more straight talk from candidates.

Military interventions in the Middle East have defined the last two presidencies. President Bush led the nation to war in Iraq with disastrous consequences—thousands killed, a failed state, a terrorist haven, the rise of the Islamic State and trillions of dollars spent. The failures of U.S. policy in Iraq are well documented. No weapons of mass destruction. No plan to rebuild the country after the bombs stopped falling. No plan to control the dispersed Iraqi army.

Then came Libya in 2011. A humanitarian crisis was brewing. At first it seemed that the Obama administration was applying the lessons of the Iraq war. Proceed with caution. Work with a broad coalition. Use limited military force for a defined mission. No regime change. But it neglected the crucial lesson: don’t start a war unless you have a clear plan to win the peace.

A major review in the February 27 New York Times describes the disastrous aftermath: Libya is now a failed state and terrorist haven. The perfect environment for nuclear weapons-seeking terrorist groups and extremists to take root, grow and thrive.

As the situation in Libya went south, the Obama administration had better luck with diplomacy with Iran. The 2015 agreement with Tehran to scale back and freeze its nuclear program has set us on a path to preventing an Iranian nuclear bomb without firing a single shot. Tehran is so far meeting all of its key commitments, and moderates seem to have been rewarded by making great gains in Iranian elections last week.

Now the Obama administration is struggling with its approach to the Syrian civil war. It’s a familiar, volatile mix. A ruthless dictator, terrorists, rebels, a refugee crisis. Obama rightly has resisted arming more of the Syrian opposition and establishing a no-fly zone, which can lead to greater military engagement. Obama says that Libya is “a lesson that I now apply every time I ask the question: Should we intervene militarily? Do we have an answer for the day after?”

Despite the lack of U.S. military involvement, the diplomatic effort to win the peace in Syria seems to be making progress. The new cease-fire—brokered by the United States and Russia—is holding for now, and the United Nations will begin the next round of peace talks on March 9.

Of these four examples—Iraq, Libya, Syria, Iran—only the diplomatic process in Iran can be called a success. Military intervention has produced two utter failures in Iraq and Libya. Syria is too soon to call. But if you’re looking to place bets on military intervention or diplomacy, the evidence is clear. It’s hard to argue with President Obama’s new, wiser mantra for U.S. foreign policy: “Don’t do stupid stuff.”

Whoever wins the White House, it would behoove us all for he or she to take Obama’s advice.