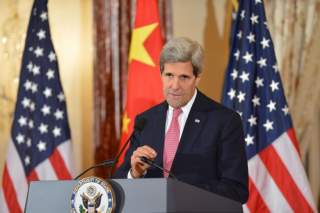 In recent months, President Obama has been accused of pursuing a somewhat listless foreign policy. Despite his first-term accomplishments in killing Osama bin Laden, decimating much of the rest of Al Qaeda’s leadership in Pakistan, tightening international sanctions on Iran, and rebalancing U.S. military and foreign policy towards Asia, the narrative has become less laudatory. The tragic Syrian civil war, ongoing troubles with Vladimir Putin over Ukraine, and uncertainty over whether Iran will agree to a reasonable compromise on its nuclear program all contribute. But the larger issue is that Republicans, still angry that Mr. Obama criticized President Bush so harshly back in 2007 and 2008 and that he prematurely declared an end to a war on terror that is in fact far from over, sense that the president has lost his commitment to a strong national-security policy—and feel that other countries around the world have noticed too.

As is often the case in American politics, the partisan critique goes too far. On Iran policy, Obama is wisely seeking a deal when the undesirable alternative is to use military force; on Ukraine, Obama’s patient approach has brought along allied support, and differs little from how George W. Bush reacted when Putin invaded Georgia in 2008; on the defense budget, sequestration has been partly fended off, and Congress caused that budget crisis every bit as much as the president did, if not more so. Obama has taken his eye off the ball on Libya, cozied up too much to a new strongman in Egypt, and unwisely deferred from helping the Syrian opposition, with tragic results that have given Al Qaeda a new sanctuary. But these are specific and discrete mistakes, not a broad retreat from American global leadership.

Still, there is a problem that requires remediation. For a president who wowed the world with his vision and his rhetoric in earlier days, who wanted so much to transform the planet with his presidency, the sum total of his foreign policy goals now seems pedestrian and mundane. The Berlin, Prague, Cairo, and Oslo speeches that envisioned a new multilateralism, a nuclear-free world, a repaired U.S. relationship with Islamic countries, and a realistic attitude towards the use of force seem a long time ago. Today, there is no apparent grand strategy to complement the administration’s generally pragmatic and competent daily efforts to handle the inbox of foreign policy.

The president’s defenders would likely say that he still believes everything he has said in those earlier speeches, that they constitute ample vision for where the administration is still trying to go, and that Mr. Obama is pursuing his lofty aspirations as far and fast as reality allows. But that attitude would confuse grand vision with grand strategy. The latter, a necessary roadmap for any great power, is a way of operationalizing vision, of establishing priorities, of making sure that the tedious day-to-day work of managing the country’s international interests and obligations adds up to more than a bunch of disconnected parts. It is also a necessary way of explaining foreign policy to an increasingly wary and disengaged electorate.

In this vein, Mr. Obama needs to reexamine the international landscape, identify the big issues, and then find a disciplined way to consistently make perhaps two or three of them the centerpiece of his foreign policy. This is the best way to counter critics in those tougher moments, like the present, when a few bad break around the world—and a few bad decisions make the president’s approach to national security and foreign policy seem ineffectual and unmoored.

Given its historical significance, China’s rise and the broader changes in Asia should clearly be one of those central foreign-policy issues. Obama got off to a good start with his Asia-Pacific rebalancing policy, dating back to 2011. It did not amount to a huge change in American foreign policy, despite the grandiose initial title of “pivot” first given to it, but was nonetheless an appropriate effort to focus on the most dynamic and rapidly growing part of the world after a decade of national preoccupation with the Middle East. It included, by my reckoning, about a $10 billion shift within the annual $500 billion defense budget (adding roughly that amount of funds, in the yearly Pentagon budget, to forces and activities focused first and foremost on the broader Pacific theater), a reinvigorated diplomatic focus on the region, and on the trade front, an attempted Trans-Pacific Partnership.

Unfortunately, some of the rebalance has been deflated by the departure of key first-term officials like Hillary Clinton, by sequestration to the defense budget, and by Congressional as well as regional opposition to a new trade deal. The president’s recent trip to the region has put a bit more energy into the rebalance. But still, the policy begs a question: what do we do, as a nation, with our renewed focus on Asia, now that we are “back”?

The answer for future China policy in particular can be summarized by the concept of “strategic reassurance and resolve.” The central idea is that the United States needs to remain resolute and firm in our defense of American interests and allies in Asia, but that we also need to look for a viable modus Vivendi with Beijing in the years ahead. The classic approach of “engage and hedge” is no longer adequate because the kinds of hedging it can counsel will often be escalatory and counterproductive now that China is stronger and bolder than before. We need to manage the competition, in conjunction with China, by looking for opportunities to reassure each other even as we do what is needed to secure key national interests.

Operationalizing this philosophy is the hard part. It will have to be an ongoing process, involving a blend of unilateral measures, arms-control concepts, mutual consultations, and at times a certain restraint in military activities and modernization efforts. One element could be an accord like the U.S.-Soviet Cold War agreement to regulate potential incidents at sea when ships and planes would approach each other; another could similarly take the Cold War-era Open Skies treaty and apply it to the U.S.-China context as well. America’s new military concept of Air-Sea Battle should be retained in some aspects but rebranded with the less tendentious phrase of Air-Sea Operations. Opportunities for greater military collaboration with China on peace and humanitarian and other such activities should be expanded. Many other policies, from the United States and China, sometimes pursued in tandem and sometimes with reciprocating unilateral measures, should be part of this agenda as well—as Jim Steinberg and I outline in our new book on the subject.

Mr. Obama could elucidate a related list of initiatives and proposals in a major speech on the subject, and then direct his government agencies to patiently and doggedly pursue the agenda in the months and years ahead. The policy would also include reasonable asks of China, as on its cyberespionage and intellectual property theft activities, and its overly assertive recent activities in the western Pacific Ocean over various disputed territories. But framing those demands in a broader strategic framework that also acknowledged the need for American restraint could make them more legitimate and reasonable in Chinese eyes.

Since the U.S.-China relationship will likely be the most important of the twenty-first century, such a new policy framework would constitute an enormous contribution to American national-security policy. It would also help put these smaller issues over Libya or Egypt or Syria or Crimea in perspective—hardly exonerating Mr. Obama from specific policy failures in some of these matters, but partially inoculating him against the charge that his foreign policy was adrift. It would fill the gap between great vision, of which this president has plenty, and a more operational grand strategy, where he has been lacking.

Michael O'Hanlon is a senior fellow with the Center for 21st Century Security and Intelligence and director of research for the Foreign Policy program at the Brookings Institution, where he specializes in U.S. defense strategy, the use of military force, and American foreign policy. He is the coauthor, along with Jim Steinberg, of Strategic Reassurance and Resolve.