This Is How South Africa Could Become the Next Zimbabwe 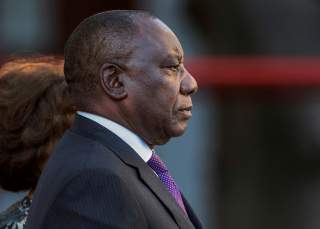 On July 31, South African President Cecil Ramaphosa confirmed that his party, the African National Congress (ANC), will pass an amendment to the South Africa Constitution allowing the seizure of white-owned farmland without compensation. Citing the "blatantly clear," demands raised during recent public hearings by his supporters, Ramaphosa says the amendment aims to clarify Section 25 of the existing constitution.

Section 25 currently mandates that if land is taken away from a property owner, ‘compensation…must be just and equitable.’ Ramaphosa claims the new amendment is designed to “outline more clearly the conditions under which expropriation of land without compensation can be affected.” In other words, the ANC is changing the ‘just and equitable’ compensation clause to mean “no compensation” is necessary—if the property is taken from white landowners.

Some view this amendment as a victory, but they shouldn't. History teaches us that disregarding the property rights of an ethnic minority due to the historical grievances committed by their racial group is a terrible idea and likely to end in catastrophe.

Ramaphosa’s and the ANC’s disdain for South African whites has always been clear. On Monday, the ANC via their official Twitter, appeared to call all white South Africans “murderers.” The president once even compared the strategy of dealing with whites to that of boiling frogs; you must raise the temperature slowly, so they do not notice what is happening, for if the temperature is raised suddenly, the frog will jump out of the water. Then, by the time the frog realizes it is dying, it is too late for it to escape the pot.

Despite his prejudices, Ramaphosa was still democratically elected by the people of South Africa last February. The president insists that the amendment will “promote redress, advance economic development, increase agricultural production and food security.” In reality, South Africa is beginning to head down the same path toward social and economic disaster that its northern neighbor Zimbabwe took eighteen years ago.

In early 2000, ex-Zimbabwean dictator Robert Mugabe began chaotic land seizures of twenty-three million acres from white-owned farms. The result was threefold. Violence became common as five white farm owners and dozens more black farm workers were killed. Then, food shortages devastated the Zimbabwean people as food production in the nation that was once dubbed the “breadbasket” of Africa, fell 60 percent within ten years. And finally, the economy was ruined as the land grab induced hyperinflation that peaked in 2008. In July of that year, the daily inflation rate averaged 98 percent, effectively meaning everyday prices would almost double. In 2009, the Zimbabwean economist Eddie Cross estimated that legalizing seizures of white farmland with no compensation cost Zimbabwe more than $20 billion.

Violence against white farmers in South Africa is already increasing. Although official numbers are not available, reports from the South African Police and the Transvaal Agricultural Union (a group representing the interests of farmers) highlight an increase in the number of attacks on white farmers. Between January and March 2018, there were 109 attacks and fifteen murders on white farms, meaning that one white farmer was killed every five days. Ramaphosa’s amendment will inevitably increase tensions and violence, as land seizures become further legalized.

As for food production, taking land away from productive and knowledgeable farmers and giving it to those unfamiliar with the industry will undoubtedly lead to a decline in productivity. Governmental promises of seeds, tools, and fertilizer for the new unskilled farmers who’ll be given the land is a “superficial” solution to the inevitable problem of food shortages, says Dan Kriek President of AgriSA, a South African agricultural association. Additionally, agricultural economist Frankie Brink, claims “there can be no doubt that the amendment of the Constitution…will deprive South Africa of its agricultural potential to provide food security to all its people.”

Some predict South Africa could already be heading toward hyperinflation—reminiscent of Zimbabwe in 2008. The unemployment rate in South Africa is near a fifteen-year high of 27.2 percent—and will likely worsen as workers on expropriated farms, often blacks in poor rural communities, become unemployed. In the last few years, the nation’s economy has begun to shrink, and government borrowing has been made more expensive as the nation’s debt-reliability rating has been downgraded. Furthermore, Dr. Marian L. Tupy of the Cato Institute suggests these economic failings are because “South Africa’s taxes are onerously high, regulation increasingly burdensome and quality of government (is) slowly deteriorating.”

Ramaphosa promised that expropriating white farmlands without compensation will turn South Africa into “the garden of Eden.” In reality, this amendment will mean the Rainbow Nation faces increasing violence, a decline in productivity, and further economic degradation.

In December 2017, Mike Albertus, assistant professor at the University of Chicago, insisted that one need not compare Zimbabwe’s past to South Africa’s future because; “Zimbabwe was a dictatorship under Mugabe, whereas South Africa is a democracy.” The logic was that the presence of democratic institutions would surely prevent the passage of such populist and draconian ideas. Regrettably, this wasn’t the case.

Ultimately, the willingness of the National Assembly to repeat Zimbabwe’s mistakes “does not rest in ignorance…but in the ANC’s desire for survival,” suggests Tupy. Putting his racist tendencies aside, Ramaphosa is justifying this amendment by stating it is the will of the South African people. And perhaps, for once, he is right. The people of South Africa didn’t democratically elect Ramaphosa out of ignorance of the policies he would pursue—his aims have been clear all along.

Unable to boost a struggling economy, the ANC will continue pushing populist policies to bolster their popularity before the next election. They see sacrificing the rights of white farmers as a price worth paying for another term in office. And, if the majority of South Africans willingly accept this sacrifice, the brutal consequences will come hard and fast.

Alexander C. R. Hammond is a researcher at a Washington D.C. think tank and a Young Voices contributor. He writes about economic freedom, human well-being and globalization. To keep up with his latest work follow him on Twitter @AlexanderHammo.