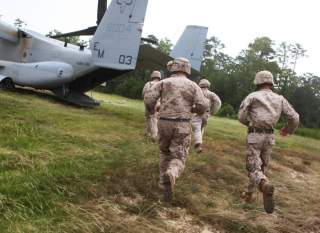 The renowned nineteenth-century author Robert Louis Stevenson, during his 1888 voyage across the Pacific, penned these words:

“The vessel plowed her path of snow across the empty deep,

far from all track of commerce,

far from any hand of help.”

Fitting words back then, perhaps still fitting today. Long forgotten or ignored by America, the key to a friendly and renewed access to these far flung Pacific island states is in the soft-stepping approach of a light footprint. And building soccer fields can provide just that footprint—one with a potential that touches on humanitarian and hard-security concerns as much as on sports.

At first glance the Pacific appears vast and remote, yet upon further scrutiny, one can make out the myriad of islands that populate the world’s largest body of water—especially south of the equator.

And not far off from those pioneer days of early aviation, one remembers reading about the disappearance of Amelia Earhart’s Lockheed Electra searching in vain for a small speck of sand in the Gilbert Islands.

One can also appreciate the vision of Pan American’s founder, Juan Trippe. He had the gall to navigate over the empty reaches of the Pacific in the mid-1930s when he launched his fleet of China Clipper flying boats, where great distance and lack of suitable landing fields prohibited the use of conventional transport aircraft. Here, planes found refuge in their boat hulls as they flew and floated from San Francisco to Hawaii and beyond, hopping from one island to the next, all the way to the Far East.

It is not surprising that Pan Am’s refueling bases became vicious and contested battlegrounds during the opening salvos of our entry into the Second World War—as evidence by Imperial Japan's appetite for Wake Island, Guam and the Philippines, followed by a close call at Midway.

Then came a brutal six-month defense of the Australian life-line to America. A long and winding sea-lock of logistics was anchored, island by island, across the South Pacific, culminating at the tip of the spear—the place we would stop Japan's territorial grab—Guadalcanal. Turn-of-the-century adventure writer Jack London, wrote a short story, “The Terrible Solomons,” in which he articulated the harsh aura of this rock rising out of the Coral Sea:

“It is true that fever and dysentery are perpetually on the walk-about, that loathsome skin diseases abound, that the air is saturated with a poison that bites into every pore, cut, or abrasion and plants malignant ulcers, and that many strong men who escape dying there return as wrecks to their own countries.”

The Guadalcanal campaign started as an emergency stopgap, but became a nasty and desperate struggle for a threadbare airstrip dug out of the steaming jungle. One can only imagine the island native, hiding in the cool shade of a palm tree as he witnessed the heavy trod of thousands of U.S. combat boots as they pounded ashore, followed by the arrival of endless convoys anchoring in the bay—smoke belching from funnels set upon steel hulls and the constant drone of warbirds soaring above his village.

Soon stockpiles of weapons and equipment were deposited on the beach, hauled, stacked and inventoried in newly erected warehouses. Roads, ramps and runways were carved out of coral, all preparatory to the coming reconquest of the Pacific—a blueprint to be repeated painstakingly, over and over again, then cleverly termed the “island-hopping campaign” of World War II.

Novelist and ex-Navy man James Michener aptly described our American journey through a tropical and logistical labyrinth in his Pulitzer Prize–winning novel Tales of the South Pacific.

Though the battles were few and far between, and not every isle or atoll witnessed hostile action, the supply chain certainly left its indelible mark on most—for it usually takes seventy pounds per man per day (an ancient calculus from Caesar's legions) and a train of at least ten men in the rear to keep one combatant at the front. As territory was conquered or retaken, and fighting advanced toward Japan, there would be a sudden drawdown (perhaps a small contingent to look after what was left behind) on whatever island was until then the key facility.

This operational order was routinely scripted and redundantly rewritten, then slung from island to archipelago, until the plan was abandoned entirely when the war ended, the half-buried dead and the rusted detritus of close combat as monuments to our just cause. At least the Australians were prescient enough to install the “Coastwatchers” network in their neighborhood as early as the late 1930s, keeping their hand in the game ever since.

During the Cold War, we further abused our welcome with atomic testing (woe betide the people of Bikini Atoll), something the French still seem keen to pursue. Nowadays we pay minimal lip service to our Pacific cousins, and not much more.

But for us, such extreme negligence has left the United States government with minimal, at best, to poor relations with these far-flung island nations, though to be sure some trade and tourism is promoted, with some islands better at it than others. And with the newly enlarged Panama Canal, the shipping lanes will shift down, and pass heavily through the southern seas again.

Enter the twenty-first century, and with it the age of realpolitik. The United States and NATO have been preoccupied with fighting Islamic terrorism; one shall not mention Iraq, but certainly the Arab Spring, Syria, Ukraine and Iran are worth noting—even North Korea. The old Russian bear has been prodded and poked awake by the raucous and irksome “color revolutions,” and is now rummaging for scraps outside his cave. So it is understandable to wonder where we stand in the Pacific region, despite the oft-cited “pivot” or “rebalance” to Asia.

But what about China's rapid reemergence as a great power—a hundred years of humiliation, a horrid and hurtful history of maltreatment by the great colonial powers of Europe, Japan, Russia and America? What about China? After all, we trade with them! We owe them lots of money! They espouse a peaceful rise!

To be fair, one can see China's point of view. One might remember reading about Mussolini, ranting to his people that Italy is an island trapped inside a bathtub, her ships blocked from entering the open sea by the British Navy at Gibraltar and Suez.

So if one were to scan deeply out from China’s coastline, one would realize just how hemmed-in it is from what is called the “First Island Chain”—an iron link from Japan, south along Taiwan's western shore, coupling the Philippines, then wrapping around Indonesia and ending at the choke point passing through the straits of Malacca, where free access to the open oceans is limited by U.S. bases and allies along this seaward barricade.

But while we have ignored the soft underbelly of the Pacific, one can be assured that China and other rivals have not. A quick search on Google will reveal articles of their interest, investment and trade with many Pacific island nations —a Chinese satellite tracking station on Tarawa? Russian military advisors in Fiji, bearing a cache of secret weapons?

To reinforce this point, great power aficionado John Mearsheimer wrote an influential essay entitled Why China's Rise Will Not Be Peaceful.

Some stories go so far as to suggest that anti-Chinese riots (in 2006 and 2014) in Guadalcanal’s so-called Chinatown gave rise to the rumor that the Chinese navy would engage in gunboat diplomacy to quell the unrest—a completely rational response to protecting their citizens abroad, as the United States has also done. But then what? A permanent posting of Chinese ships and naval bases?

Peter Navarro, in his pull-no-punches detective story Crouching Tiger, asks the troubling question of whether Chinese ballistic missiles are capable of striking American cities, not only on the West Coast but deeper inland, to places like Chicago, Washington, New York, Atlanta, Miami or Dallas. How would this be accomplished?

Perhaps it would partly be achieved by Chinese submarines slipping through our soft underbelly in the South Pacific. Yet Naval War College professor James Holmes regards antisubmarine warfare capability as “an advantage that will prove durable for the United States for quite some time to come.”

It couldn’t hurt to have a (passive) sonar presence in the Marshall Islands, or New Hebrides. So, for the United States, a return to mutually beneficial relations will require a tender and friendly touch—no need for gunboat diplomacy. No need to occupy ground. Furthermore, this approach needs to be genuine and heartfelt. Sure, there are strategic interests at stake, and the status quo will be challenged, but an open and honest dialogue weighing the pros and cons of our interest and support should be beneficial.

Although U.S. commitments overseas will likely continue to increase into the twenty-first century, it appears inevitable that our abilities to meet those demands will decrease in deployable assets and manpower, due to deep budget deficits and constraints. With that, one must look for more economical means to both address support for our neighbors overseas and to balance our big budgets. So what can we do—rapidly, and without great strain on the national treasury to help our friends in time of crisis?