How Sri Lanka Demonstrates the Limits of the UN System 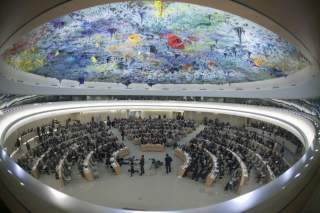 In recent years, the island nation of Sri Lanka has received considerable attention from the Geneva-based UN Human Rights Council. Country-specific council resolutions were passed on Sri Lanka annually from 2012 to 2014. These resolutions dealt broadly with alleged wartime abuses, reconciliation and ongoing human-rights violations under the administration of the increasingly authoritarian Mahinda Rajapaksa, who ruled the island nation from 2005 to January 2015. Rajapaksa rejected all three of those resolutions and used developments at the council to drum up domestic political support.

Rajapaksa was ousted in January 2015 and the new government, led by Maithripala Sirisena, promised to rebalance Colombo’s foreign policy and implement a wide-ranging reform agenda. With this in mind, Sri Lanka cosponsored another UN Human Rights Council resolution in October 2015 that laid out a strong transitional justice agenda, including a truth commission and an accountability mechanism to address allegations of wartime abuses committed, by both Sri Lankan government forces and the separatist Tamil Tigers, during the country’s twenty-six-year civil war that ended in May 2009.

Colombo’s compliance with this most recent resolution will be reviewed in detail in March 2017, during the council’s thirty-fourth session. However, even if Sri Lanka were to make significant progress in the coming months, the bottom line is that the country’s transitional justice process will go beyond March 2017, even under the best of circumstances.

There are legitimate worries that, if Sri Lanka falls off the council’s formal agenda, then Colombo may be even less inclined to follow through on its previous commitments. After all, these are difficult, controversial issues; so, sustained international engagement and concomitant diplomatic pressure look more important than ever.

In this context, the passage of another resolution on Sri Lanka during that thirty-fourth session would be eminently helpful. But this is tricky for several reasons. For starters, Sri Lanka’s new government has been welcomed with open arms by a range of Western nations, including the United States—the driving force behind previous resolutions on Sri Lanka. In addition, the United States is not a formal member of the council this year, so a powerful ally may need to do a lot of the diplomatic legwork behind the scenes (something that would need to start soon if there’s any chance of another resolution on Sri Lanka even being tabled in the current political context). The U.S. presidential election adds an additional layer of complexity to the situation, and an outgoing Obama administration looks even less inclined to encourage continued scrutiny on Sri Lanka’s new government.

The UN Human Rights Council can be a good venue to raise awareness about human rights issues and encourage states to conform to international human-rights norms, although it’s not really designed to usher in dramatic changes. This isn’t to suggest that the United States should not devote diplomatic and financial resources there. It should—and it’s better for the United States to be a council member state than trying to influence diplomatic and political processes from the sidelines. However, the recent case of Sri Lanka underscores how messy and complicated multilateral diplomacy at this body can be. It also illustrates the inherent challenges of pursuing country-specific initiatives through a relatively short time horizon.

Taylor Dibbert is a freelance writer based in Washington, DC.

Image: View of the Human Rights Council during the urgent debate on Syria May 29, 2013. Flickr/Creative Commons/U.S. Mission Geneva