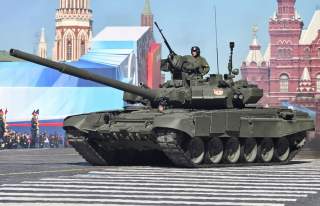 On Wednesday, Ashton Carter, the president’s nominee for Secretary of Defense, made headlines when he told Congress that he was “very much inclined” to arm the Ukrainian troops in order to combat pro-Russian rebels.

Carter isn’t alone in this regard. The release of a report this week calling for a vast expansion of U.S. military aid to Ukraine, titled “Preserving Ukraine’s Independence, Resisting Russian Aggression,” helped reignite the debate in Washington, D.C. on the provision of lethal weapons and a reassessment of the U.S. role in the conflict. The authors are prominent former diplomats and highly respected members of the national-security establishment, including Michele Flournoy, Strobe Talbott and Steven Pifer, amongst others. As a result, the president’s administration has come under heavy political pressure to reevaluate the existing policy of support for Ukraine. The prominence and experience of the political figures behind this report makes it impossible to ignore. It is a concise piece of argument, demanding the United States supply $1 billion per year in defense articles to Ukraine, ranging from anti-tank missiles to advanced air defense, and a variety of technical enablers for the Ukrainian military.

The proponents of this armaments proposal have treated support for arming Ukraine as a litmus test for supporting Ukraine in its hour of need. But this is a false equivalence. In fact, it is entirely reasonable to support Ukraine fully and simultaneously oppose sending additional weapons into a volatile conflict region. Indeed, the proposed arms shipments would do little to help Ukraine militarily and might actually worsen the situation. Kyiv is in desperate need of financial, technical and political support to achieve vital objectives, which include a fledgling reform agenda and negotiating a durable settlement to hold the country together. This in fact is the position adopted by Chancellor Angela Merkel of Germany and other U.S./NATO allies.

Sending a mix of weapons to Ukraine is unlikely to improve the situation, given the overwhelming force-on-force mismatch the country faces against Russia, but it could add fuel to a fire that is steadily consuming the country’s chances of emerging as a new nation on a European path. Instead, the United States should provide equipment and supplies to sustain Ukraine’s fledgling military, save lives, double down on economic aid and increase efforts aimed at reforming the country. Ukraine needs a genuine army, not weapons. Creating a sustainable professional force in Ukraine is a long-term effort the West must undertake as part of an overall strategy for the country, and perhaps under the framework of a strategic partnership that should emerge from thought and deliberation. Sending weapons in and of itself is not a strategy, either for Ukraine, or for settling the conflict. The United States must focus on achieving a durable political settlement first. This report does not offer recommendations on a path to peace, and no explanation of how weapons shipments could result in a political settlement to the war currently raging in the Donbass.

(Recommended: 5 Russian Nuclear Weapons of War the West Should Fear)

At its essence, the report is intended to press the reluctant president into changing his course in Ukraine, and to make the United States a more active participant in the conflict. Its core premise is that by giving Ukraine the ability to kill more Russian soldiers, sending weapons would raise the costs of war for Moscow to an unacceptable level, thus forcing Russia to abandon its existing policy and thus deterring further aggression. The weakness in the armaments proposal is that it offers no vision for what a new political settlement to the current conflict might look like, or how to move beyond the failed Minsk ceasefire, but recommends an Afghanistan-like approach to dealing with the Russian invasion. This document advocates in no subtle terms for the United States to undertake a proxy war with Russia in Ukraine, and to supply the country with weapons equivalent to half of its current defense budget. It represents an important perspective in the policy debate of how to best help Ukraine, and merits thorough analytical consideration.

One of the problems in the report’s argumentation is that it lists a series of fears and anxieties regarding Russia’s territorial ambitions as part of its policy-justification set. Analysis of Russia’s annexation of Crimea has shown that the operation was inherently unique and could not be repeated elsewhere in Europe, while Moscow has demonstrated little interest in spontaneously invading NATO countries. On the contrary, previous references regarding the Russian world, or Novorossiya, have already been eliminated from official rhetoric. Real ultranationalists in Russia are suppressed by the government, which does not plan to realize their ambitions.

Russia has shown no desire for a broader invasion of Ukraine, either, although it has the means, and the report confirms that Ukrainian officials believe a large-scale attack to create a land corridor to Crimea is highly unlikely. This was always improbable from the perspective of military science, and continues to be so. Russian actions suggest a calibrated economy of force effort to press Ukraine into accepting the breakaway separatist regions, and securing Moscow’s influence in the country. Sending weapons into the conflict today cannot be justified by the specters of early 2014, when alarmism reigned and fears of further Russian ambitions dominated Europe. Those fears have proved largely unfounded as we head into 2015.

The report also casts allusions to supposed U.S. credibility issues, and commitments to Ukraine’s security, if weapons are not provided. In reality, the United States has absolutely no obligations to Ukraine’s security under any type of accord or framework, including the Budapest Memorandum. Despite this, the United States has very vocally supported Ukraine’s new government, its territorial integrity and its European choice, along with providing economic and nonlethal military assistance. Staking U.S. credibility on the provision of military aid, while Germany continues to see the provision of lethal assistance as the wrong policy, is a dubious proposition. Berlin is disinclined to abet a proxy war in place of a political solution. American credibility is not on the line in what is first and foremost a European effort, especially when Berlin refuses to see such policies as viable. Instead, Western credibility as a whole should be tested by the commitment to aid Ukraine over the long term, and help Kyiv maintain a democratic and European path.

The recommendations for providing Ukraine with specific military capabilities are also unlikely to prove effective. Experts familiar with the reasons for Ukraine’s military defeat understand that it is not due to technical deficits, although those exist across the board in its armed forces, but because its army as a whole is not a capable force. It lacks logistics, training, commanders with experience at maneuvering brigade- or battalion-sized elements, any coordination between volunteer battalions and regular forces, along with independent military analysis of the problems. There is no intelligence, no mobile reserves, no unified command and a political leadership that often seems disconnected from the facts on the ground. Dumping weapons into this operating environment is unlikely to prove a solution to the problems, all of which are fundamental and structural. The only thing clear in this conflict is that Ukraine stands no chance of defeating Russian forces, or the separatists, and that military escalation is a disproportionately losing proposition for Kyiv.

The report reveals that Ukraine lacks any real intelligence or reconnaissance on the ground, and that its assessments of the number of Russian forces in the conflict are in stark disagreement with actual intelligence conducted by NATO. The numbers are incoherent, they vary wildly depending on the Ukrainian adviser you talk to, and most importantly, are not in alignment with U.S./NATO data. The only visible agreement between NATO and Ukraine on the composition of separatist forces appears to be that the overwhelming majority of fighters are locals and likely Ukrainian citizens, which completely undermines the premise of the entire report that Russian forces are the key participants and their casualties will prove a deterrent.

NATO’s estimates generally show a few thousand Russian advisers and experts, while Ukrainian intelligence, which has no technical reconnaissance means, claims up to 400 Russian tanks and 10,000 Russian soldiers currently involved in the conflict. These numbers are so fantastical in range, that they suggest there is an entire Russian armored division fighting in Ukraine, perhaps even two, that have gone unnoticed by U.S. satellites (note Russia’s 4th Guards Division only has 300 tanks and 12,000 personnel required to field them). How can intelligent decisions be made on what weapons to send Ukraine when Kyiv visibly does not know what the Russian forces are, where they are and how many of them there are?

The authors also advocate for strategic air defense, even though one of the few areas where Ukraine’s military remains effective is precisely in air defense, from mobile Osa and Buk systems to strategic S200 and S300 variants. Notably, no airpower has been used by Russia in this war, and Ukraine’s air defenses remain a real problem, even for the modernized Russian air force. The report states that the bulk of casualties during separatist offenses are caused by long-range artillery, while recommending that the most important asset the United States can provide is Javelin “light anti-tank missiles.” These could make a real difference against Russian tanks, though there are visibly relatively few of them in operation in Ukraine. Outside of the fact that the Javelin is an extraordinarily expensive missile, at $250,000 per unit, and far from light (50lb), the problem with this logic is that Russia’s army will adapt instead of suffer needless casualties. It may force the Russian army to rely on heavier standoff weapons that would prove catastrophic for Ukraine. When anti-tank weapons proved a problem for Russian armor in Chechnya, they chose to level Grozny with artillery, for example. Russia’s army today is not the incompetent, underfunded force many remember. Crimea demonstrated that this is a capable army, able to conduct sophisticated operations, and unlikely to be stumped or defeated by the introduction of one weapon system or another.