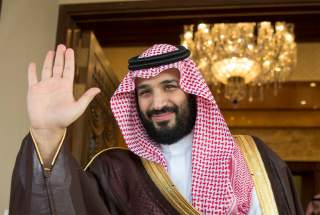 In a recent 60 Minutes interview the Saudi crown prince, the effective ruler, cast a new light on the proposed U.S.-Saudi nuclear energy cooperation agreement that he and the Trump administration would like to seal: “Without a doubt,” the prince said, “if Iran developed a nuclear bomb, we will follow suit as soon as possible.”

The prince’s threat to break the agreement to match “as soon as possible” a move by Saudi Arabia’s bitter rival makes clear he wants a ready nuclear weapons option. This goes a long way toward explaining Saudi insistence that the agreement leave the door open to Saudi enrichment of uranium. A domestic centrifuge facility (the preferred enrichment technology) would provide quick access to explosive levels of enriched uranium, and thus to weapons.

The alternative energy-related explanation is not plausible as it makes no economic sense for Saudi Arabia to develop commercial enrichment. There is a thriving world enrichment market, and lots of capacity. If Saudi Arabia buys nuclear reactors it will have no worries about access to fuel. And the country would gain no economic advantage whatsoever in extracting plutonium, the other dangerous technology at issue.

In any case, our overriding consideration should be national security. We should rule out the dangerous fuel technologies in the agreement by insisting on what has come to be known as the nonproliferation “gold standard” for U.S. civil nuclear cooperation.

We are at an important turning point. The widely publicized calculations on the military significance of Iran’s centrifuges educated the world on the dangers of national uranium-enrichment facilities. If in the full knowledge of that, we choose a permissive approach—allow domestic Saudi enrichment—we will set an awful precedent endorsing nuclear programs that put countries within arms-reach of a nuclear weapon.

Some U.S. supporters of a permissive U.S.-Saudi agreement see it as a fight-fire-with-fire tactic to frighten Iran. The trouble with that approach is that it can easily get out of hand, with disastrous consequences, and not only in the Middle East. The answer is to convince Iran to back off in its uranium enrichment, not to open the door to others to emulate it.

Much has been written about the dangers of having many nuclear-armed countries. As Henry Kissinger famously observed, “To assume that, in such a world, nuclear catastrophe could be avoided would be unrealistic.” It is only a short step from that if lots of countries have easily exercised nuclear weapons options. It would be an inherently unstable arrangement, one whose consequences are incalculable. Better to slow things down, to provide time for sober thought before countries reach for the ultimate weapon.

The immediate effect of a permissive U.S.-Saudi agreement would be to roll back the tighter one with Saudis’ neighbor, the United Arab Emirates, which is predicated on keeping the same key provision in future agreements. Next, it would set a pattern for upcoming negotiations with Egypt in 2021 and with Turkey in 2023, neither of which will settle for anything stricter than is in the U.S.-Saudi agreement. And at the other end of Asia it would bolster South Korea’s continuing efforts to gain U.S. approval to extract plutonium and enrich uranium.

The two worrisome proliferation regions, Northeast Asia and the Middle East, are now coupled through nuclear energy deals and—it has recently emerged—security agreements. South Korea’s 2009 nuclear energy contract with UAE included secret military clauses. South Koreans are the leading contenders for the Saudi’s nuclear project. It would not be surprising if similar clauses appeared in that contract. It’s clear the current interest in nuclear-fuel technologies in the Middle East and northeast Asia has a large military component, which makes it all the more important to maintain strict conditions.

Washington nuclear-policy experts tell us not to worry because the nuclear cooperation agreements have provisions that can be used to delay Saudi enrichment, and anyhow the Saudis don’t want nuclear weapons. Significantly, the Israelis, who otherwise line up with the Saudis against Iran, aren’t buying this and vigorously oppose a permissive agreement.

The ultimate argument is of course the venerable one—if we don’t loosen our nonproliferation requirements, then the Saudis will buy from the Russians or Chinese instead of the United States, which will cost us influence in the Middle East. Even the premise is wrong. The Saudis will most likely choose the South Korean team that is coming off the successful completion of UAE reactors. As for switching to Russia or China, neither is an attractive partner. Would the Saudis trust the builder used by Iran?

More fundamentally, this thinking reflects an outdated and exaggerated notion about the importance of nuclear energy. Its prospects have diminished radically, as has its international importance as a political currency. There is no chance, for example, that the United States will build another large nuclear power plant based on current technology. They no longer make economic sense. Why then do we promote such plants abroad and thereby excite interest in dangerous technologies?

More sensible would be to invite the Saudi Prince to discuss energy alternatives. His United Arab Emirates neighbors have announced they won’t build anymore nuclear plants. The same economics applies to Saudi Arabia. That would also facilitate a reasonable outcome with Iran over its nuclear program.