How to Stop Iran's Missile Program 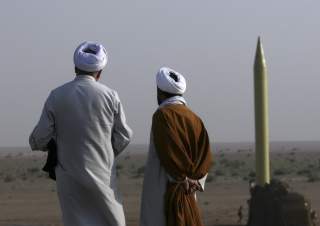 Just four weeks ago, the Iranian Revolutionary Guard’s commander, Gen. Mohammad Ali Jafari, told the Associated Press that Tehran was imposing a 1,242-mile range limit on its surface-to-surface ballistic missiles. Although lax (all of Israel’s bases, and most of America’s in the Gulf and Middle East, fall within this range), this limit should be seen as a start. The question now is how much further might the United States and other like-minded countries be able to push Iran to impose tighter controls.

Washington would hardly be alone if it wanted to find out. France’s President Emmanuel Macron and Foreign Minister Jean-Yves Le Drian have called for bilateral talks with Iran about its missile program and the need to limit it. Earlier in October, German foreign minister Sigmar Gabriel expressed concerns about Iran’s persistence in illicitly seeking missile technology from German firms. After Iran tested a 1,242-mile-range multiple-warhead Khorramshahr missile in late September, British foreign minister Boris Johnson protested as well.

All of these officials are concerned about the regional security implications of Iran’s missiles. Saudi Arabia and the UAE are now spending billions of dollars to procure U.S. missile defenses to meet the Iranian threat, including the rockets Yemen is launching with Iranian assistance. U.S. Patriot batteries have shot down more than one hundred of these Houthi missiles since 2015, but the attacks are getting worse. In July, Houthi forces launched a Burkan H2 missile several hundred miles at a Saudi oil refinery. In November, they went further, firing an Iranian Qiam 1 missile toward Riyadh itself. Only days after this strike, the Houthis threatened to hit targets in the UAE and claimed on December 3 to have fired a missile at a UAE nuclear plant (which UAE officials denied).

U.S. missile defense systems have intercepted most of these missiles. If Iran should share the maneuvering warhead technology it has proven on its one-thousand-plus-mile-range Emad missile, though, it is unlikely that any of the missiles defenses Saudi Arabia or the UAE have deployed would be so successful.

Yet neither Congress nor the White House has taken action. The Obama administration argued that nothing more could be done to pressure Iran. Iran’s latest concession, though, suggests otherwise. The Iranian leadership knows that it cannot risk unifying the United States, Germany, the UK and France against it. These nations collectively constitute a majority of the Joint Commission that controls the implementation of the Iran nuclear deal. Iran also cannot be seen as going out of its way to engage in aggressive missile activities without galvanizing its neighbors in opposition.

Finally, the Iranians cannot be seen as resisting proposals that could be sufficiently even-handed (i.e., that would not just pick on Iran) to attract Russian or Chinese support.

What, then, should be done? Encourage Iran to go further with two simple proposals.

First, separately from the current Iran nuclear deal, the United States, the European Space Agency (ESA), China, and Russia should offer commercial launch services to Iran, Israel, Egypt, Turkey and the Gulf Cooperation Council states in exchange for their agreement to suspend further space-launch vehicle launches or testing. Such a moratorium could be initiated with as many willing parties even if, initially, not all might commit. The aim here would be to make sure all of these states, including Iran, are able to enjoy the peaceful benefits of having access to space without the further firings of their own SLVs.

Second, the United States, France, the United Kingdom, China and Russia should pledge not to export long-range surface-to-surface missiles (as defined by the range-payload limits of the Missile Technology Control Regime) or key components to any party in the Middle East or Persian Gulf. They should insist, however, that, in exchange, states in the region, including Iran, do likewise. To help enforce this understanding, members of the international Proliferation Security Initiative should consult and focus their efforts with the thirty-five state members of the Missile Technology Control Regime. Again, this effort should be initiated (but not held up) with as many willing parties as possible.

Pushing these proposals would be helpful. Would Iran agree? It’s unclear; but Iran certainly would have difficulty arguing against them. It’s likely that France, the United Kingdom and Germany would be supportive. As for Russia and China, both would be hard pressed to object. Perhaps just as important, their promotion would be a means for the Trump administration to answer the Iranian threat while uniting, rather than dividing, the coalition that has worked to limit Tehran’s nuclear-weapons-related efforts.