How to Stop the Bloodletting in Syria 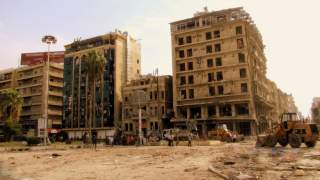 The humanitarian crisis in Syria can be remedied by the establishment of protected zones in its north and south. In the regions where they are set up, the killing would end; human rights abuses would substantially diminish; American and international humanitarian organizations could deliver emergency assistance in safety; refugees could begin to return from neighboring Turkey, Jordan and Lebanon; reconstruction projects in protected towns could be launched; and opposition-led democratic governance could grow deeper roots. The Syrian nightmare would not be over, but large numbers of Syrians would experience their first period of normalcy in years.

President Obama, who has been clear and decisive about taking on ISIS in Syria (and Iraq), now needs to take this next step. His commitment of U.S. air power to defend the Syrian Kurdish town of Kobane last autumn saved it from being overrun by hardened ISIS fighters. Coordination between the U.S. Air Force and the largely Kurdish ground troops supported by Free Syrian Army forces led to the killing of hundreds of ISIS’s most experienced soldiers.

The air-ground partnership demonstrated what can be achieved without the use of U.S. ground forces when we have local forces to partner with. The same principle of U.S. air power cooperating with local ground forces to provide areas of security and stability can be applied more broadly to protected zones. Again, the president has led the way on this, authorizing an arm and train initiative for thousands of Free Syrian Army troops supervised by the U.S. military under retired General John Allen and Major General Michael Nagata. This program is intended to build on the existing US covert action program that supplies Free Syrian Army troops in the north and south with limited amounts of weapons.

Here’s how protected zones would work. They would be established initially in three provinces: Aleppo—which includes the city of Aleppo, Syria’s largest town—and Idlib provinces in the north along the Turkish border; and Deraa province bordering Jordan in the south. U.S. allies would benefit from efforts to secure their border areas and be nearby to provide support as appropriate and agreed with Washington. Turkey and Jordan would also be springboards from which humanitarian assistance would flow into the zones, along with regular commercial traffic to provide a semblance of normal economic life for returning refugees and those still living in these provinces.

Security in the protected zones would be provided by U.S. air power and Free Syrian Army ground forces, as well as potential support from allies.

The new increment in protected zones would be a commitment by the United States to provide air power to help defend them from attacks by Assad’s forces as well as standard anti-ISIS targeting. The president, pinning his hopes on a nuclear deal with Iran, has been reluctant to arouse the Iranians’ ire by increasing the pressure on Tehran’s Syrian ally. The risk to successful negotiations with Iran from expanded but still limited U.S. air engagement against Assad cannot be ignored. Nor should it be exaggerated. The American goal would be to defend the three designated protected zones, not oust the regime by direct force. Moreover, if Assad desisted from further air and ground attacks including barrel bombing assaults in the defined zones, he would avoid military confrontation with the United States.

Once established, protected zones would provide a secure base for the Free Syrian Army to take the offensive against ISIS from their enclaves in the north and south, while moderate opposition leaders embark on negotiations with Assad to agree on a transitional government. In fact, that should be the basis of the deal between the United States and the moderate opposition before the White House agrees on pressing ahead with protected zones. Opposition leaders and Free Syrian Army commanders should agree to focus their military efforts on liberating territory occupied by ISIS and defending themselves from attacks by Assad outside the protected zones. They should also commit to negotiating with Assad for a transitional administration that could end the fighting between the government and the moderate opposition.

There is a significant probability that American leadership in establishing and helping defend designated protected zones would produce a humanitarian breakthrough for large numbers of Syrians, put ISIS on the defensive, and make a negotiated settlement between the regime and the moderates more attractive by altering the military balance.

Neither the president’s generosity—he has authorized enormous amounts of life saving humanitarian relief—nor his judiciousness in sparing the use of American ground troops in Syria are in question. But humanitarian generosity and military judiciousness have proven insufficient to end the worst humanitarian crisis since the end of World War Two. Even many of the president’s admirers have come to believe that he needs to balance these qualities with measured forcefulness to move the Syrian crisis toward a resolution. We think that protected zones are a practical step forward.

From 2003-2014, Peter Kovler served as Chairman of the Board of the Center for National Policy.