How to Stop the Scary Slide in U.S.-China Ties 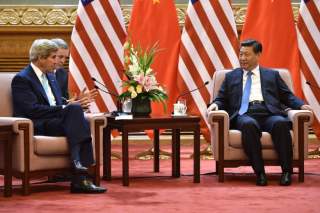 The upbeat tone at the biannual bureaucratic gathering last week on U.S.-Chinese ties known as the Strategic and Economic Dialogue (SED) did not mask the troubling reality: the U.S.-Chinese relationship is more at risk than any other time since 1989, as Beijing’s assertive actions on disputed territories in the South China incrementally changes the status quo. And about the only certainty is that this elaborate bureaucratic exercise checked all the boxes on issues from climate change to currency manipulation, yet the relationship will continue its downward spiral. The core issue of whether the world’s two largest powers can find a modus vivendi remains unanswered.

The trajectory of U.S.-Chinese relations—whether they become predominantly cooperative, predominantly competitive, or remain a mix of both indefinitely—will likely remain a key question around which much of the global order of the twenty-first century will revolve. And to a considerable degree, the answer to that question turns on whether a framework for strategic stability is possible.

As was learned in August 1914, economic interdependence does not necessarily prevent nations from going to war. In part, an effort to avoid 1914 analogies, Beijing has recently been promoting the idea that the United States and China should forge a “new type of great-power relations,” an aspiration that President Obama embraced at the 2013 Sunnylands Summit with Chinese President Xi Jinping, though it lacks any mutually agreed definition.

The United States and its economic and security partners in the region have all been pursuing a hedging strategy of cooperation with China economically and on other issues where interests overlap, yet seeking to counterbalance Beijing’s growing military capacity and influence. Indeed, apprehension about Chinese intentions among many nations in the Asia-Pacific has animated new networks of security cooperation, including between: Japan and India, India and Vietnam, Japan and the Philippines, Singapore and India, Japan and Australia, and Japan, India and Australia trilaterally. All are allies and/or security partners of the United States.

One feature of a more cooperative relationship would be a stable, more predictable military balance with mechanisms that manage risk and tend to foster mutual restraint. China has cited U.S. missile-defense programs as being destabilizing. The administration’s 2010 Ballistic Missile Defense Review cited the importance of “maintaining strategic stability in the US-China relationship.” And the 2010 Nuclear Posture Review called for pursuing high-level dialogues with Russia and China “aimed at promoting more stable, resilient and transparent strategic relationships.”

It took nearly two decades and several near nuclear catastrophes before the United States and the USSR created understandings and processes to cope with a bipolar world. But the U.S. strategic situation in regard to Moscow contrasts sharply to that in Beijing.

Despite an increasingly problematic relationship with Russia, the U.S.-Russian balance has benefited from a strategic framework based on arms-control arrangements, transparency, and predictability along with consultation mechanisms, much of it a legacy of the Cold War. There are obvious differences in regard to China, with which the United States has a complex, highly interdependent economic relationship yet which is not an adversary, but rather a strategic competitor. Moreover, unlike Russia, which was a nuclear peer, there is a great, but slowly narrowing, asymmetry between the U.S. and Chinese nuclear arsenals.

Today, there is no effective structure of arms control, nor sufficient mechanisms for strategic consultation, crisis management, confidence building, reassurance or transparency measures with China that adequately manage risk. For nearly two decades, U.S. administrations have sought a strategic dialogue with China. But Beijing has been unwilling to engage, citing the huge discrepancy between U.S. and Chinese nuclear forces, and thus, rejecting the idea of arms control. Beijing also is uncomfortable with analogies to the USSR with the implication that China is an adversary.

One reason for this is that China has a strategic culture in which transparency has been viewed as a weapon of the strong against the weak, and uncertainty and unpredictability are viewed as providing an advantage rather than a liability. For example, despite increased maritime traffic in the East and South China Seas resulting from disputed territorial claims, China has been unwilling to establish formal mechanisms for ship-to-ship communications. During the Cold War, the Incidents at Sea Agreement was popular with both the U.S. and Soviet navies as a tool to avoid accidents and incidents.

For the United States, the uncertain size and structure of China’s expanding nuclear force as well as its military doctrine, its antispace and cyberactivities along with the continued development of its Anti-Access and Area-Denial (A2/AD) conventional military capabilities are all sources of concern. For example, China is modernizing its nuclear forces in ways that suggest it might be developing nuclear war-fighting capabilities.

For its part, China has not indicated particular concerns about the size of the U.S. nuclear force and has welcomed U.S. nuclear force reductions under the New START Treaty. Arms reduction talks need not be on the agenda of a useful strategic dialogue. But transparency and confidence-building measures in regard to its nuclear posture are important. China cites U.S. missile defense capabilities—both real and imagined—and U.S. conventional prompt global strike (which is only in the development stage) as threatening the survivability of its retaliatory second-strike nuclear capability.

The one salient theme that permeates all elements of the U.S.-Chinese relationship—economic, financial, environmental, sea-lane security, nuclear, space and cyber—is some degree of mutual vulnerability. Harming each other’s economy or financial systems, for example, would cause serious damage to both. China has lived with vulnerability to nuclear strikes since the 1950s, as has the United States. All vulnerability is not equal; in some areas such as space, for example, the United States is more vulnerable than China, but that gap is narrowing.

Some argue that mutual vulnerability is not a fact of life, but a policy choice. This argument is that the United States can build a fully protective, national missile-defense system that would negate any vulnerability, though at present, the United States has opted for a far more limited homeland defense. However, there is a more compelling argument that such complete invulnerability, absolute security, is technically and financially unattainable and that a quest for it would be prohibitively expensive and almost certainly spur both an arms race and Chinese and Russian efforts to devise countermeasures.

The administration has not spelled out what the requirements are for strategic stability with China or on what principles it would be based. It is not a given that a workable basis for strategic stability with China is possible, and establishing one would involve at best a protracted, incremental process over the coming decade. It may take contemporary equivalents of the Berlin and Cuban Missile Crises to “shock to the system” to move toward a mutually acceptable formula for strategic stability with China. But the elements of a useful framework could include understandings in regard to mutual restraint in areas such as: nuclear, missile defense and the maritime, space and cyber global commons. This may include doctrinal talks, transparency, and confidence-building measures. For example, the idea of a joint technical analysis of the U.S. BMD program and its capabilities vis-à-vis Chinese systems, or appropriate transparency in regard to each side’s nuclear-weapons activities could be explored. In regard to rapidly escalating concerns about the most likely near-term triggers for a regional conflict—maritime activities in the East and South China Seas—an Asian version of the Open Skies agreement might be considered.

The logic of a U.S.-Chinese framework for strategic stability suggests that as in the nuclear sphere, similar and growing mutual vulnerabilities exist in the cyber and space domains as well, as a recent book, The Paradox of Power, has argued. All three domains are offense-dominant (that is to say, offense is qualitatively more effective and far less expensive than defense). This logic could include a recognition of mutual deterrence and seek to add a layer of mutual restraint across an ever-widening space (e.g., focusing cyber restraint initially on financial systems, and then widening out from there).

One test of Chinese intentions would be in the maritime domain. There has been successful cooperation among China, the United States, India, Japan and other naval forces conducting antipiracy activities in the Gulf of Aden. While this may be an anomaly rather than a precedent, in light of the shared interest in sea-lane security (a large percentage of all world trade goes through the Straits of Malacca), an effort at cooperative sea-lane protection would be worth exploring.

To date, China has preferred to pursue its asymmetric strengths. But the Chinese economy, financial system, and increasingly, its military are as highly dependent on unimpeded access to cyberspace as those of the United States. In the cyber domain, the issue would need to be addressed at the strategic level—cyberattacks that impact U.S. military capabilities and infrastructure, harm individuals or well being. Similarly, China is increasingly dependent on unimpeded access to space for the civilian economy as well as the PLA’s order of battle, has surpassed the United States in terms of satellite launches and could soon be operating more satellites annually than the United States or Russia. For China, asymmetric warfare is a diminishing asset.