How to Stop the Taliban in Afghanistan's Most Crucial Province 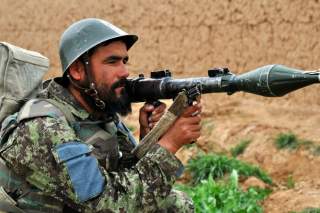 Helmand, one of the largest provinces of Afghanistan, has long been considered the center of gravity of the Taliban insurgency. This is because of its strategic significance both in terms of economics and politics. From an economic point of view, Helmand is an arable region, producing more than 90 percent of Afghanistan’s opium cultivation. The harvest of opium has created a substantial amount of revenue and has been fueling the Taliban’s war machine since its defeat in 2001. In terms of political significance, controlling a vast province such as Helmand with Lashkar Gah, its capital city, along with fourteen districts will politically strengthen the Taliban. In addition, from a military perspective, governing an urban area with potential for economic and political prominence would be a major victory over the fragile Afghan government.

More importantly, it will negatively affect the peace process, which remains the only solution to end the Afghan conflict. Additionally, any momentous success by the Taliban against the Afghan army would weaken the government’s ability to negotiate from a position of strength. For this reason, the prospect of a political settlement will remain even gloomier in case the Taliban take more territory.

With Helmand seeing of fierce battle in recent days, Afghan defense and security forces are struggling to hold firm against the Taliban. It has been reported that the insurgents have made rapid advances in several of Helmand’s districts, such as Nawa, Nad Ali, Garmsir and parts of Musa Qala. One could argue that the Taliban are gaining momentum due to the premature withdrawal of the U.S. and coalition forces from the province in early 2014. This created an enormous security vacuum—not only in Helmand, but also in the entire south. Helmand should have never left the Afghan and coalition forces’ sights after the bulk of international troops withdrew. And the Afghan security forces stationed in the province must have been adequately supported, in terms of equipment, logistics and intelligence. After all, the lack of support by Afghans as well U.S. and NATO forces led to the territory falling into the hands of the Taliban.

Afghan security forces have been unable to keep the Taliban at bay in this strategically important province for manifold other reasons as well. Chief among them, purportedly mentioned in Afghan political circles, is the mismanagement of war efforts and lack of leadership among security forces. This perception is reinforced by analyzing the strength of the Afghan security forces in Helmand. In addition to the police and intelligence presence, there is an entire army corps for the defense of the province. Conversely, the number of Taliban and other insurgents who are fighting against the Afghan government does not exceed three thousand, according to the latest research and estimates.

The imbalance between enemy and friendly forces demonstrates that there is indeed a serious problem in terms of successfully leading the war in the southern province. While Helmand, which borders Pakistan and whose opium funds the Taliban insurgency, may be difficult to govern, Afghan forces do have the potential to bring normalcy and stabilize the situation. In fact, it is quite possible, due to the presence of a large force that has been fighting bravely and tenaciously against the Taliban over the years. It will be even more promising with strong leadership, at both the civilian and military level, defending the people of Helmand from the brutalities of the Taliban.

Moreover, in order to push back the Taliban from population centers and keep the city and district centers safe and secure, there must be a comprehensive counterinsurgency strategy implemented specifically for Helmand. Given the flat nature of the province, as well as densely grown agricultural fields that serve as cover for the Taliban, the Afghan army needs to map out a phase-by-phase strategy in order to clear these areas from the insurgents. The first phase must prioritize the relocation of inhabitants from the contested territories to safe zones, and then clear those areas. Once every district and the surrounding villages are fully cleared of the insurgents, then the local population can move back to their houses and farms.

The lessons of fighting insurgencies teach us that unless the local populations are safely evacuated to specific locations from the battlefields, it will be extremely difficult, if not impossible, to crush the insurgency in population centers. This has been one of the main obstacles in defeating the militants in Helmand over the last decade. The local populations are neither for nor against the Taliban; insurgents use their communities to attack the Afghan security forces. In most cases, the army cannot operate effectively, due to civilian casualties, or else to avoid killing people who are being used as human shields by the Taliban. Hence, relocating locals is the key to winning over the inhabitants and avoiding civilian casualties. This strategy was successfully devised and executed by neighboring Pakistan to root out the Pakistani Taliban, in operation Zarb-e-Azb in North Waziristan.

Therefore, it’s high time for the Afghan security agencies to come up with a three-pronged strategy—shift, clear, hold—in order to secure Helmand once for all. The province has been the epicenter of the Taliban militancy to date, and has provided the insurgency with enormous amounts of revenue and income to sustain its strength and resiliency for fifteen years. The time has come to eradicate the Taliban’s military and financial resources in Helmand, which would significantly affect their command and control in other parts of Afghanistan.

Ahmad Murid Partaw is the former Afghan Senior National Representative to U.S. Central Command and a graduate of Political Science from the University of South Florida. His research focuses on Afghan politics and the Middle East. He is an alumnus of the Near East South Asia Center for Strategic Studies  as well as United States Special Operations Command and Joint Special Operations University.

Image: An Afghan private with an RPG. Flickr/Resolute Support Media