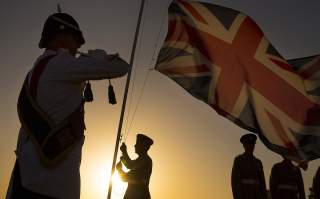 If you are at war with an aggressive adversary to reverse its long-term power, it is no surprise that it strikes back occasionally. The Nazi Blitz of Britain in 1940–41 was causally linked to Britain's war with Nazi Germany. Going by the logic of minimizing any violence in the near term, would it have been better to renounce war with Nazism in 1940? Some believed so. After all, a misconceived and disastrous war in 1914–18 had helped cause Hitler's rise in the first place, and Hitler offered Britain a negotiated settlement. But the calculus of the British government was more far-sighted. Though belligerence had helped cause Nazism and led to its assaults on the United Kingdom, Britain judged that it couldn't afford to exist only at the permission of a totalitarian state, especially given the record of its barbarous behavior once it conquered other countries. As Churchill judged it, “What I find unendurable is the sense of our country falling into the power, into the orbit and influence of Nazi Germany, and of our existence becoming dependent upon their good will or pleasure.” As ”the lights went out and the bombs went down,” the alternative Churchill offered was not the false assurance of safety, but of stoic persistence and ultimate victory. “London can take it.” Of course, the stakes are lower with the Islamic State. They are more limited, but still real. As we speak, Muslim armies of the Gulf are encircling and grinding down the Islamic State, and evicting them slowly out of Mosul, with the help of western airpower, intelligence, cash and stealth. This is not the end; terrorism will remain chronic for years to come. But it is a major blow, inflicted against an opponent that is suffering defections, losing income and, in the long-term, suffering reversals that will damage its charismatic appeal. Would it be better to leave the caliphate intact, for fear of angering potential radicals at home?

Over a longer arc since 9/11, along with terrible failures and abuses, the cumulative impact of intelligence, police work and military disruption have depleted terrorism within our heartlands—from complex, mass-casualty attacks to frequent failure and often crude attempts. Without again waging unwise wars that blow open vacuums, a slow, patient campaign of disruption, attrition and containment deserves support. But it asks for toleration of costs, sometimes agonizing human costs, in the meantime. Manchester, and London, remind us of the weight of that calculus. Violent outrages of that kind are not unrelated to the conflict we have chosen, but neither are they proof of its folly.