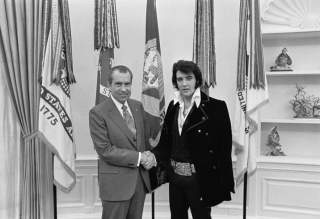 In his history of popular culture and the U.S. presidency, What Jefferson Read, Ike Watched and Obama Tweeted, Tevi Troy relates an anecdote about a White House meeting between then-president Richard Nixon and rock ‘n’ roll sensation Elvis Presley. Elvis came to the meeting "dressed in a purple jumpsuit and a white shirt open to the navel with a big gold chain and thick rimmed sunglasses" prompting Nixon to comment, "You dress kind of strange, don't you?"

Elvis replied simply, "You have your show and I have mine."

That sums up the current state of the political battle over the Keystone XL pipeline in Washington, even after the recent Nebraska Supreme Court decision and the subsequent Congressional votes.

Republican majorities were sworn into both the House of Representatives and the Senate on January 6, and began work on a bill to approve the Keystone XL pipeline. Bipartisan congressional efforts to do so twice before—following the 2010 midterm election and just last month—failed, but the popular support for building the Keystone pipeline repeatedly shown in the polls has made this a priority for Republicans and many pro-energy Democrats in Congress.

In response, President Barack Obama has threatened to veto the bill if it reaches his desk, and has repeated talking points from environmental activist Bill McKibben with escalating sarcasm about the Canadian "tar sands." At one point, the editors of the Wall Street Journal mocked the economic illiteracy of Obama's statement that more shipments of Canadian oil would have "no effect" on gasoline prices for American consumers.

As he claims the Keystone XL pipeline will have no positive impact, the president is defensive to the point of seeming a bit obsessed. On the same day that he announced his breakthrough with Cuba, facilitated primarily by Canada, Obama could not resist taking a cheap shot at Keystone. Whether he was trying to make clear there was no quid quo pro for Canada's diplomatic help with Cuba or whether he was legacy shopping, Obama's continued slights towards the Keystone project and Canada do more harm than good.

The State Department and the White House also insisted that they had to wait to hear how the Nebraska state supreme court would rule on a challenge by landowners to that state's approval of the new Keystone XL route. Now that ruling is in, and it upheld the approval. The focus now returns to Washington, D.C.

What has become increasingly clear is that White House statements about the Keystone XL pipeline project have become further detached from reality on the ground. TransCanada chairman Russ Girling has taken to issuing regular fact checks rebutting inaccurate White House claims about his company's project with no discernable effect.

Another fact with seemingly no impact on the Washington debate over Keystone is the dramatic drop in oil prices on world markets. In discussing Western sanctions against Russia following Vladimir Putin's military incursions in Ukraine, President Obama says that he foresaw the oil-price collapse coming, and expects that it will bring Iran to make concessions on its nuclear program, too. Republicans counter that Obama did everything he could to keep consumer gasoline prices high in support of his environmental goals. The president could disprove this and lay a more credible claim to credit for lower oil prices by encouraging Canadian production and transport via the Keystone XL pipeline, but shows no signs of doing so—he holds to his theory that Canadian oil has no impact on the U.S. and global markets.

How can the Obama White House remain impervious to facts about Keystone XL? Call it the Elvis Doctrine: Canada has its show, and Washington has its.

For Obama, the show is all about his presidential legacy—from Cuba to Russia, from middle-class families who want a break on gas prices to environmentalists who campaign against fossil fuels, it is all about being on the perceived right side of history and his political base.

Republicans are following a different script, based on a different expectation of the judgment of history and the U.S. electorate in 2016. But they are happy to place a spotlight on Obama's Keystone XL obstruction with congressional hearings and legislation. And with the Nebraska court removing the last legal obstacle, and the State Department expected to recommend approval as it has in the past, Republicans may be able to get Senate Democrats to vote for their legislation approving Keystone.

Momentum in Washington seems to have shifted in Keystone’s favor, but the show is not over there yet. The best bet remains that the next U.S. president, Republican or Democrat, will likely be the one to issue a presidential permit for Keystone XL.

For the Canadian oil industry, the priority is to get the show on the road. If not by means of Keystone XL, then by rail, or by one or more of the new pipelines being planned to connect to the Atlantic, Pacific or even Arctic oceans, and from there to world markets. Lower oil prices on the world market give consumers more latitude for choice among suppliers, and Canada's stable and plentiful oil can compete well in this price environment with unstable and unpleasant alternatives. That's one reason why Mexico, Venezuela and Saudi Arabia are increasingly concerned about competition from Canada for gulf-coast refineries should Keystone XL get built.

With the Elvis Doctrine in effect, everyone, it seems, has their own show to perform about Keystone XL. Compromise is a no-show. To paraphrase Nixon, it's kind of strange, isn't it?

Robert W. Murray (@DrRWM) is the Vice-President, Research at the Frontier Centre for Public Policy and an adjunct professor at the University of Alberta. Christopher Sands (@sandsathudson) is a Senior Fellow at the Hudson Institute and a Senior Research Professor at the Johns Hopkins University School of Advanced International Studies, both in Washington, DC.