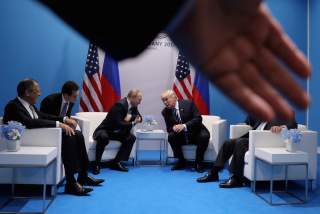 The much anticipated first face-to-face meeting between Presidents Donald Trump and Vladimir Putin has taken place on the sidelines of the G-20 summit in Hamburg, Germany. The two presidents met for over two hours, with only translators and their respective chief diplomats—Secretary of State Rex Tillerson and Foreign Minister Sergey Lavrov—joining them. Despite its length, the meeting’s narrow agenda, which Tillerson himself called transactional, also underscores the continuing dysfunction in U.S.-Russia relations.

Both the State Department and the Kremlin confirmed that the two presidents discussed cyber security, Ukraine and Syria. Specific deliverables were limited, and focused primarily on improving the conditions for continuing dialogue, especially around the shared priority of counterterrorism. This should at least reassure Trump’s critics that no “grand bargain” has been offered or agreed linking Syria, Ukraine, or any other issue.

According to Tillerson, Trump “pressed” Putin on Russian interference in the U.S. election and others’ domestic politics, presumably a reference to Germany, France, the United Kingdom and other U.S. allies in Europe. Not surprisingly, almost nothing on this subject has come out from the Russian side—just Putin’s blanket denial that any interference was the work of the Russian government—although Putin acknowledges that it poses a hindrance to the improvement of U.S.-Russia relations.

For this reason, Tillerson announced, Moscow and Washington will hold further discussions on a framework for dealing with a wide array of cyber threats, from interference in elections to terrorist attacks. If that discussion was Trump’s nod to the intelligence community’s conclusion that Russia “hacked” the 2016 election and is continuing to launch cyberattacks on U.S. critical infrastructure, then it was likely inadequate to reassure Trump’s critics in Washington, DC. The political impetus for the Russia investigation and pending sanctions legislation on Capitol Hill will therefore continue.

The most concrete deliverable from the meeting seems to be a ceasefire to be declared in Southwestern Syria, near the city of Daraa. While any cessation of hostilities is positive, and could help save lives, this particular declaration is significant mostly because the region is of interest to U.S. allies Jordan and Israel, on which it borders. A ceasefire along the border could reduce the likelihood of any future incidents between Israeli or Jordanian and Russian forces, which would in turn put pressure on the White House to pick sides. So the ceasefire is a win for Trump, if a small one. To the extent such a slight reduction in hostilities enables the renewal of political dialogue, as Tillerson has suggested, also represents progress. However, past ceasefires have been neither comprehensive nor enduring, and it is hard to imagine this case will be any different.

For Trump, the summit with Putin was a chance to advance at least two of his repeated campaign and post-election promises. Trump promised to improve the relationship with Russia, and has cited the importance of U.S.-Russian cooperation to stemming the spiraling crisis in Syria, and to the global fight against terrorism more broadly. With the Syria ceasefire, he now has something modest but concrete to show. Having praised Putin as a strong and effective leader during the campaign, and endured withering attacks from his opponents for it, Trump can now also claim victory as a tough negotiator who “pressed” Putin on various areas of disagreement, from cyberattacks to Ukraine—on which newly appointed Special Envoy Kurt Volker is set to begin work next week in Kyiv.

For Putin, the primary focus was always his domestic audience. Although his reelection in March next year to another six-year term is virtually guaranteed, the real test is whether he can maintain the enthusiasm of his electoral base, and produce a credible turnout as a validation of his continuing rule. This two-hour meeting with Trump allowed Putin to showcase his own skills as a negotiator, holding firm to Russia’s longstanding positions on hacking, Syria and Ukraine, but also putting the final nail in the coffin of the previous U.S. administration’s policy of “isolation.” After sitting down as an equal with the leader of the world’s most powerful country, while attending a gathering with over a dozen other top leaders in the richest country in Europe, Putin can hardly be called isolated.

But for the same reason, a swift improvement in the largely dysfunctional U.S.-Russia relationship should not be anticipated. For Putin, dysfunction is useful since it reinforces the longstanding narrative that Washington aims to contain Russia geopolitically and degrade it economically, with the ultimate objective of regime change. This narrative yields one inescapable conclusion for the majority of Russian voters: only Vladimir Putin is capable of guaranteeing their safety and wellbeing.

Even if new dialogues are launched on hacking, Syria and Ukraine, the Kremlin is in no position to make concessions, and the White House is under such pressure and scrutiny from Congress that it is also unlikely to give an inch. The best-case scenario, therefore, may be that increased dialogue helps to manage and prevent unintended military escalation between Russia and the United States and its allies in Syria or the Baltic region. Beyond that, the path to what the Kremlin has called “normalization” with Washington is still obstructed by deeply conflicting interests, domestic politics and widespread mutual distrust.