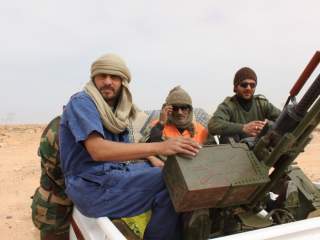 When the Qaddafi regime fell in 2011, centralized power quickly dissipated and Libya fell into chaos. A wide range of armed groups asserted control over large swathes of territory in the oil-rich nation without any effective central authority strong enough to exert control of the entire country. Since then, Libya has become a battleground for outside powers with competing interests and conflicting visions.

Several weeks after losing the July 2014 election, a Muslim Brotherhood–led coalition (“Libya Dawn”) seized the capital city of Tripoli. The Libya Dawn fighters established an administration (the New General National Congress) pushing the nation’s UN-recognized government into Tobruk, situated along the Mediterranean coast near Egypt. Despite UN efforts to broker peace, forces loyal to Libya’s Tripoli- and Tobruk-based governments remain in conflict. The fact that both sides have foreign sponsors has unquestionably prolonged and intensified the country’s multitude of problems.

Two Gulf Arab states, the UAE and Qatar, which both played pivotal roles in the Libyan uprising as sponsors of anti-Qaddafi rebels, have emerged as rivals in this grander geopolitical struggle. The UAE, along with Russia and Egypt, backs the Tobruk-based government; Qatar, along with Turkey and Sudan, supports the Islamist-led government in Tripoli. Abu Dhabi and Doha’s proxy war in Libya is illustrative of a division within the Gulf Cooperation Council (GCC), which is proving highly influential in shaping Libya’s post-Qaddafi political order.

At the heart of the Emirati-Qatari rivalry in Libya lie sensitive political issues for the Gulf monarchs. Specifically, how should the Council’s ruling families react to the rise of grassroots Islamist movements such as the Muslim Brotherhood (Ikhwan), which promote democratic institutions and espouse social justice concerns across the region? Naturally, the Gulf Arab monarchs were unsettled by the potential for anti-government activism in countries like Egypt to add momentum to opposition groups in the GCC. Yet, as the Muslim Brotherhood’s various political wings gained power in multiple countries through post–Arab Awakening elections, the Gulf monarchs reacted differently to the political apertures that Islamists secured in 2011 and 2012.

On one end of the spectrum, the UAE has for years conducted a staunchly anti-Islamist foreign policy. Since 2011, Abu Dhabi has invested substantial resources in efforts to counter the Muslim Brotherhood, most notably in Egypt and Libya. On the other end, Qatar has sponsored Muslim Brotherhood branches across the Arab world, viewing such factions as vehicles capable of spreading Doha’s influence and extending its geopolitical leverage. Saudi Arabia, the Council’s powerhouse, sits somewhere in the middle. The kingdom has aligned with the UAE in Egypt, where Riyadh and Abu Dhabi have invested billions of dollars in the Egyptian military since Abdel Fattah el-Sisi ousted Muslim Brotherhood President Mohammed Morsi in 2013. But in Syria, the Saudis have worked with Doha to back Sunni Islamist rebels seeking to overthrow the Assad regime.

Abu Dhabi’s interest in countering the Muslim Brotherhood throughout the region is rooted in its concerns about the movement’s potential to challenge the status quo in the UAE’s poorer emirates, where the local Muslim Brotherhood branch has maintained a support base for decades.

During the 1950s and 1960s, Egypt’s Arab nationalist president Gamal Abdel Nasser cracked down on the Muslim Brotherhood; many of its members fled to the Gulf. After the UAE gained independence in 1971, many of these Brotherhood members, in their capacity as educated and upwardly mobile members of society, gained prominent positions of power in the Emirates’ public and private sectors. They also held influence in the nation’s judiciary and education system. In 1974 they established Al-Islah, an official NGO which is understood to be the Muslim Brotherhood’s Emirati branch. By the 1990s, UAE authorities grew unsettled by Al-Islah’s increasingly political activity and banned the group’s members from holding public office.

After Egypt’s Muslim Brotherhood won the 2011–2012 elections, Abu Dhabi’s relationship with Cairo grew tense. Emirati officials accused Egypt’s Islamist-led government of “encroach[ing] upon the sovereignty and integrity of other nations”. Yet, in the aftermath of the Egyptian military’s ouster of Mohamed Morsi in 2013, the UAE announced a $4.9 billion aid package to Cairo, effectively resetting the Egypt-UAE alliance.

Qatar has maintained an activist foreign policy since its Emir, Sheikh Hamad bin Khalifa Al Thani, overthrew his father in a bloodless palace coup in 1995. By launching the pan-Arab satellite network Al-Jazeera in 1996 and pursuing a more open relationship with Iran, Qatar earned a reputation as being the GCC’s “wild card.” Other Council members criticized Doha for not always keeping in mind the interests of its fellow Gulf Arab monarchies. Al-Jazeera’s coverage of other Arab nations’ affairs prompted several Arab regimes to criticize the network as early as 2002.

Another source of tension between Qatar and the rest of the Council has been the Egyptian-born senior cleric Yusuf al-Qaradawi, known as the Muslim Brotherhood’s spiritual leader, who has lived in Qatar since the 1960s. Qaradawi’s sermons have angered Doha’s fellow Council members. Emirati leaders lashed out at Qatar for not silencing the cleric after he accused the UAE of siding “against Islamic rule.” According to WikiLeaks, in 2009 Abu Dhabi’s Crown Prince Mohammed bin Zayed met with U.S. officials and declared that Qatar is “part of the Muslim Brotherhood.” The prince also encouraged Washington to examine Al-Jazeera employees, predicting that it would discover that most of the staff were tied to the Muslim Brotherhood.

Regardless, the network was popular on the Arab street, where by 2011 many hailed Al-Jazeera as a promoter of democratic change and popular revolution. Yet, certain autocratic regimes across the region viewed the Muslim Brotherhood as an existential threat, and soon saw Al-Jazeera as Doha’s political weapon, being used to stir up trouble. Qatar’s critics observed that Qaradawi was a popular television host on Al-Jazeera. According to the Egyptian Independent, in March 2011 an Egyptian Muslim Brotherhood presidential nominee, Khairat al-Shater, traveled to Doha to address coordination between “the Brotherhood, the Freedom and Justice Party [the movement’s political wing in Egypt], and Qatar in the upcoming period,” leaving many to conclude that the Qataris were seeking to influence the outcome of Egypt’s first democratic election following Mubarak’s fall from power. Qatar and Al-Jazeera soon gained reputations as being pro–Muslim Brotherhood.

In March 2014, this tension reached a new level when the UAE joined Saudi Arabia and Bahrain in recalling their ambassadors from Doha to punish Qatar for its ties with the Muslim Brotherhood—an unprecedented event in the Council’s history. Abu Dhabi, Riyadh and Manama accused Qatar of failing to abide by a November 2013 agreement that committed the six members to “principals of non-interference in the internal affairs of other GCC countries and not supporting anyone who threatens the security and stability of other GCC countries including organizations and individuals and not supporting the antagonistic media.”

Eight months later, Saudi Arabia hosted a meeting in which three GCC members and Qatar agreed to end their rift. The Emirati, Saudi and Bahraini envoys returned to Doha after deciding that, in light of the “sensitive circumstances the region is undergoing,” it was in the interest of all Gulf Arab nations to turn a “new page” and restore unity to the GCC. Tension between Saudi Arabia and Qatar has eased substantially since King Salman inherited the throne in January and softened Riyadh’s harsh stance on the Brotherhood, as part of a strategy to unite the wider Sunni Arab world against Iranian influence and Daesh/Islamic State.

The UAE, however, has not softened its stance against the Muslim Brotherhood. Throughout 2015, the UAE has grown frustrated with Riyadh’s overtures to the movement, while maintaining its anti-Islamist foreign policy. Libya has become a battleground in this Gulf rivalry. The extent to which the UAE has committed itself to countering Islamist groups in Libya was underscored in August 2014, when Emirati pilots flying out of bases in Egypt carried out strikes against Islamist militants seeking control of Tripoli. Although the UAE’s strikes were futile in terms of thwarting the Libya Dawn coalition from seizing control of the nation’s capital, the military operation signaled a watershed in Emirati foreign policy. This was the first time in which the UAE military waged strikes against a foreign country without international authorization.

Last month, the New York Times exposed leaked Emirati emails revealing the UAE’s shipment of arms to certain Libyan militias—in violation of a UN arms embargo—attempting to weaken Islamist groups allegedly sponsored by Qatar. Other leaked emails show how the UAE offered Bernardino León, former UN mediator for Libya, a high-paying position as director general of the Emirates Diplomatic Academy, which he accepted while serving his then-role as mediator. Given the UAE’s outright support for the Tobruk government, many have called into question the viability of the UN’s ongoing efforts in light of the perception that León’s impartiality was compromised by a conflict of interest.

At the Camp David summit of Gulf Arab leaders earlier this year, President Obama told the Emirati and Qatari leaders that he favored an inclusive political solution in Libya. The Gulf Arab officials present agreed not to publically criticize the ongoing peace process and concurred that, as is the case with so many of the region’s conflicts, there can be no military solution. Yet, since the summit, the UAE and Qatar have reportedly continued to compete for power in Libya by backing their respective clients. Libya is certainly not the only regional battleground where Qatar and the UAE have supported opposing sides, but the stakes in that country are high for both Abu Dhabi and Doha.