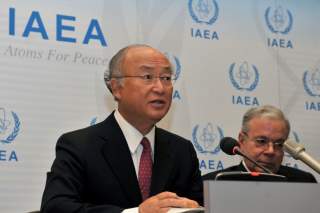 Diplomats and other experts often refer to nonproliferation “regimes,” i.e. systems of laws, norms, and practices intended to halt the spread of weapons of mass destruction The nuclear nonproliferation regime, based on the 1968 Nonproliferation Treaty and the statute of the International Atomic Energy Agency as the implementing body, has a spotty record.

It did not succeed in preventing Saddam Hussein’s Iraq from developing an advanced weapons program, though the IAEA, under UN authority, clearly did an excellent job of dismantling Iraqi nuclear infrastructure after the first Gulf War, as became clear later on, after the 2003 invasion.

Intensive U.S. bilateral diplomacy helped block North Korea’s withdrawal from the NPT, initially announced in 1993, for a decade. But Pyongyang then tested its first nuclear weapon in 2006. Iran remains party to the NPT, but nonetheless managed to flaunt its obligations under the treaty for quite some time.

There is, in fact, a solid “pragmatic” argument, to borrow a term from outgoing Joint Chiefs Chairman Martin Dempsey, for the ad hoc Iran nuclear deal signed July 14. Former U.S. ambassador to Iraq James Jeffrey is right that, at this point, Congressional rejection of the deal would not open the way to a better agreement. The Joint Comprehensive Plan of Action (JCPOA) with Iran, at least as written, portends a better outcome than was achieved with North Korea, and one should avoid overstretching the analogy between the two cases.

But the Iran deal does confirm, in my view, a definitive turn in how the international community deals with cases of suspected nuclear proliferation. It is no accident that Security Council Resolution 2231, endorsing the JCPOA, states explicitly that it “should not be considered as setting precedents,” but, practically speaking, that will prove no more than a pious hope.

Instead of talking about the nuclear nonproliferation regime, we now should admit that the North Korean and Iranian cases have moved us into the realm of ad hoc approaches to individual cases of suspected nuclear proliferation. In the future, the international community may have to address new concerns that some state is trying to acquire nuclear weapons. (This might come in response to past or future Iranian actions, though not necessarily.)

It makes sense to examine the Iran deal with an eye to precedents for a possible next case of suspected proliferation. The JCPOA, with its unanimous Security Council approval, is now firmly part of the international record, and potential future proliferators will be reading the text carefully, and scrutinizing the deal’s implementation.  Effective verification is unlikely to be entirely smooth and simple.  For reasons of personal history, I insist on keeping in mind the Iranian regime’s overall record when working to ensure implementation of the JCPOA.  But it also is unwise to look only backwards.

Debate on the Iran deal in the United States has been intensely partisan. Criticisms of specific aspects of the JCPOA, however, should not be dismissed as nothing more than assaults on the president and his administration. Some criticisms are substantive and relevant to how we address proliferation concerns in the future. How credible, for example, is the snapback sanctions mechanism? True, the United States or another Security Council member with veto power could cause the legal basis for sanctions to be re-imposed, but essentially at the cost of driving Iran out of the deal and thus scuttling it.

The notion of a reliable 5 to 3 “Western” majority for votes in the Joint Commission created by the JCPOA also could prove illusory. EU foreign policy chief Mogherini made a point of covering her hair in Tehran on July 28, though she had not done so on a trip to Saudi Arabia, and she later spoke optimistically of high-level EU/Iran trade and energy talks by the beginning of next year. On July 29, French Foreign Minister Fabius was in Tehran trying to build bridges. None of this is actually shocking, but it suggests that the concrete benefits of normalized relations with Iran will flow more to our West European partners than to the United State., and this could promote divergent views on Iran in the future.

The Iran deal also seems to confirm a de facto weakening of the IAEA, despite the large verification role assigned to the agency. For one thing, resolution of the long and richly documented list of unresolved issues between Iran and the IAEA became a side issue, rather than a condition for signing the JCPOA. This may well have been necessary to secure an agreement in timely fashion, but indicates that the lead is firmly in the hands of the parties to the Iran negotiations, with the P5, Germany, and EU also committed to presenting a resolution to the IAEA Board of Governors “with a view to closing the issue” (Art. 14) after the IAEA Director General submits a final report on discussions with Iran based on the “Roadmap for Clarification of Past and Present Outstanding Issues,” by mid-December. In other words, the Iran/IAEA issue will be closed, at best, well after Adoption Day for the JCPOA, as set out in the UN Security Council resolution.

Iran’s public August 1 warning to the IAEA about sharing information with the U.S. Senate suggests that Tehran sees itself in a strong position vis-à-vis the IAEA.  The notion of keeping the substance of the document confidential is striking. Iran’s failure to provide transparency and cooperation with the IAEA in addressing “Possible Military Dimensions” of its nuclear program is documented in numerous reports by the IAEA Director General to the organization’s governing body, which are publicly available on the agency’s website, e.g. the November 2011 report providing a detailed account of Iranian work on nuclear weapon design.

Based on such public IAEA documentation, it is possible to project what should be on the agenda of the Iran/IAEA discussions.  Making the actual agenda clear might have reduced suspicions that pending issues have been simply discarded. And Iranian insistence on confidentiality does not exactly promote confidence. There is a risk that potential future nuclear proliferators will draw the lesson that disrespecting the IAEA will not be a deal-breaker once a few stakeholder countries seize the reins of negotiations.

The agreement also provides a relatively long timeline for addressing eventual IAEA concerns about undeclared nuclear activities or activities inconsistent with the JCPOA. Twenty-four days (see Annex 1, Arts. 75-78) does not compare favorably to the challenge inspection provisions of the Chemical Weapons Convention (CWC), to which Iran is also party. The analogy is not perfect, admittedly, but the CWC gives the Executive Council of the Organization for the Prohibition of Chemical Weapons only 12 hours in which it can reject one member state’s request for an inspection on the territory of another member state, and requires a ¾ majority to reject a request. It is also significant that the JCPOA gives ultimate decision-making authority not to an established international body, but to the Joint Commission of JCPOA signatory states, an ad hoc entity created by the agreement itself.

The formulation in the JCPOA (Preamble, iii) that Iran “reaffirms that under no circumstances will [it] ever seek, develop, or acquire any nuclear weapons” also concerns me.  As a state party to the NPT, Iran already was bound to a more detailed and comprehensive commitment, including, for example, a ban on seeking or receiving “assistance in the manufacture of nuclear weapons” (see NPT Art. II). Why not simply use the NPT language?  Is the JCPOA language some sort of replacement for the NPT commitment? A later generic reference to the NPT as “the cornerstone” of nonproliferation (Preamble, vii) does not entirely allay my concerns. The implicit message, at least for nonproliferation obsessives, is that small groups of interested states can reformulate commitments adopted by the overwhelming majority of world nations, and with decades-long standing. This requires extreme caution.

Again, it is better to have a framework of nuclear commitments involving Iran than to have nothing, which is the alternative if Congress torpedoes the deal. All agreements have some weak points from the standpoint of one signatory or another (usually all the signatories).  Verification is necessary in countering proliferation, no matter how strong a foundational document one has.

But what the international community agrees and does with Iran now and in the near future will have broad consequences in the longer term. It is important to think ahead about what the Iran deal, including all its details, will mean the next time there is a proliferation threat to address.  The end of the nuclear nonproliferation regime, and its replacement by a new approach, or a series of differing approaches, may have been inevitable.  Periodic review of the NPT’s operation was built into the treaty itself, and the review conferences at five-year intervals have not been going well, including the one that just concluded in May.

The treaty always had its limits, since states could not be required to join. India, Israel, and Pakistan come to mind. It also is frankly easy to get impatient with broad multilateral diplomacy. Restricted groups of key stakeholders can appear to offer more efficient and incisive decision-making, although perhaps a small group also could be too ready to reach an agreement.

In any case, the Iran nuclear deal confirms that we have entered a phase of ad hoc approaches to proliferation concerns, employing specific political geometries, whether the Joint Commission that is part of the Iran deal, or bilateral efforts and the six-party talks (the United States, North and South Korea, Japan, China, and Russia), which were less successful in dealing with North Korea’s nuclear ambitions. Perhaps we are getting better at ad hoc approaches, but making the best of the Iran nuclear deal will require a lot of difficult work, and we must pay careful attention in passing judgment on the process and in drawing lessons for the future.

Eric R. Terzuolo was a U.S. Foreign Service officer from 1982 to 2003, and focused on international security affairs. In 2001-2003, he was the senior U.S. resident representative to the Organization for the Prohibition of Chemical Weapons in The Hague. He is author of NATO and Weapons of Mass Destruction: Regional Alliance, Global Threats (Routledge, 2006) plus other books and articles on WMD proliferation.