How the Kurds' Power Play Backfired in Turkey 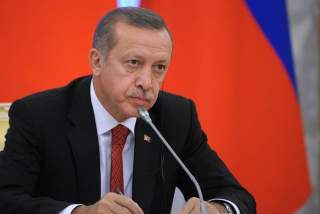 Imprisoned PKK leader Abdullah Ocalan’s recent calls for the Kurdish militants to end the armed struggle inside Turkey seemed designed to show that they were on the brink of a peace deal. It didn’t work. The likelihood of a formal peace settlement has never been worse, and for now this may suit both the PKK and the Turkish government.

Turkey’s president, Recep Tayyip Erdogan, gambled that Ocalan’s announcement, first delivered by members of the pro-Kurdish Peoples’ Democratic Party (HDP) in a televised meeting with senior government officials, would give his party a boost before June national elections. Erdogan’s Justice and Development Party (AKP) has been negotiating with Ocalan since a ceasefire took hold in 2013 and has little to show for it. Turkish soldiers, who have been withdrawn to fortified bases outside city centers in the country’s Kurdish southeast, no longer carry out military operations, giving the PKK de facto control over the region.

Erdogan used to talk about striking a deal with the Kurds to give them broader rights. No longer. The government hasn’t shown any signs that it plans to meet any of the Kurds main demands, including constitutional changes to give Kurds ethnic-based rights and devolution of power to allow some self-rule. Instead, Erdogan is focused on avoiding concessions while extracting promises that the PKK will disarm and disband. “What Kurdish problem?” Erdogan said two weeks after the February 28 press conference. “There isn’t one anymore.”

Ocalan’s message to the PKK—read out again on March 21, during Kurdish new-year celebrations in Diyarbakir, the de facto capital of Turkey’s Kurdish region—seemed to prove Erdogan right. He didn’t have to give the Kurds much of anything to get Ocalan to call off the PKK. Erdogan hopes voters on the right get this message and back him in the June elections, rather than the traditional ultranationalist Nationalist Action Party (MHP), which is on the rise in polls.

The pro-Kurdish legal political party also seemed to think that Ocalan’s statement, in which he told the PKK to hold a special congress to formally end the war, would improve their party’s image in the run up to the polls. But they had a very different calculus than Erdogan. HDP needs a minimum of 10 percent of the national vote to make it into parliament. Kurdish votes alone aren’t enough and the party’s been trying to refashion itself as the new, liberal alternative for Turks and Kurds. Ocalan’s message appeared to fit into the party’s push to show that it’s a vehicle for peace and that it wants liberties for everyone, not just for Kurds.

The Kurdish party miscalculated. The image of the Kurdish officials standing next to Erdogan’s senior people didn’t play well among Turkish liberals and leftists, the very people HDP needs votes from to get into parliament. After all, Erdogan has long since ceased to be a democratic hope. He’s abandoned plans to reform the constitution to strengthen democracy and civil liberties, and he’s been pushing for a controversial security bill that would further limit rights. He’s made clear the only political changes he wants are those that would strengthen the presidency, without any checks and balances. Turkey’s liberals and leftist activists will hesitate to vote for to a party that looks like it’s cozying up to Erdogan.

Kurdish politicians also have been battling rumors that they struck a secret deal with Erdogan and the announcement only added to suspicions. According to one rumor, Kurdish deputies in parliament will support Erdogan’s anti-democratic measures in exchange for Ocalan’s release to house arrest. Another, more-complicated rumor has the Kurds entering the elections knowing they are unlikely to get the minimum 10 percent needed. Under Turkey’s electoral law, without 10 percent, any seats the Kurds do win on a regional basis pass to the next party, most likely the AKP. This would almost certainly guarantee AKP the super two-thirds majority it needs to do whatever Erdogan wants.

The Kurdish party’s co-chairman, Selahattin Demirtas, has repeatedly stated that there’s no deal, secret or otherwise. He realized quickly that he needed to contain the damage from the joint statement by Kurds and the Turkish government, which helped feed the rumors. That’s why on March 17, he said his party would never help Erdogan realize his ambitions for presidential rule, even as Demirtas restated Kurdish commitment to making peace with Turkey.

But the Kurdish rebels, whose military leadership is based in the Kandil mountains in northern Iraq, aren’t in any rush to make any deal. Since Ocalan and the Turkish state agreed to a ceasefire two years ago, the PKK has grown more powerful: the pro-PKK Kurdish political party runs most municipalities in Turkey’s Kurdish southeast; armed rebels meet supporters and run civilian teams from mobile bases; pro-PKK activists in the de facto Kurdish capital Diyarbakir are putting into place a local parliament and other trappings of a Kurdish state.

The PKK’s image and legitimacy have also gotten a huge boost in the past two years because of the PKK’s fight against Islamic militants in Iraq and Syria. PKK militants and fighters from the allied Syrian Kurdish PYD party have emerged as a key Western ally in the fight against the violent extremists from the so-called Islamic State.

It’s clear that the Kurdish rebels aren’t planning on blindly following the leader. There’s no split between the PKK and Ocalan, but it’s been years since Ocalan was able to dictate to the rebels as he did when he ran the group from its headquarters in Damascus, before his capture in 1999. Cemil Bayik, who has been with Ocalan since the PKK was founded in 1978, responded to Ocalan’s message by saying the PKK needed to see political changes on the ground. “For the armed struggle to end, there are certain steps the Turkish state and government must take.”

The PKK’s response to Ocalan’s call puts Erdogan on notice that he can’t exert his will over the Kurds the same way he’s done over the rest of the country. The rebels won’t honor demands that require the PKK to disband itself without an agreement that gives Kurds basic rights, such as mother-tongue education, protects democracy for all citizens and establishes a framework for Kurdish self rule. That is a far cry from Erdogan’s vision for Turkey, which sees power increasingly concentrated in his hands while shrinking the space for dissent and debate. Serious peace negotiations would only threaten Erdogan’s political goals.

A democratic constitution that grants Kurds some form of self-rule is not in the offing. Erdogan is showing no signs of being ready to accept a liberal environment in which everyone, Kurd or Turk, is free to debate and criticize. Last week, Erdogan lashed out at the government for allowing the Kurdish party to read out a 10-point list of democratic demands on television after Ocalan’s initial declaration. He warned that giving in to Kurdish demands for a commission to monitor the peace process would be a “disaster.” He said it designed to bestow legitimacy on Ocalan, making it a “dangerous step.”

His intolerance for dissent has no limits. He recently lambasted the head of the central bank for not lowering the interest rates, and he hectors cabinet ministers, which he has no right to do according to the constitution.

The Kurdish movement in Turkey has a historic choice to make: it can choose to be either a force that helps save Turkish democracy by checking Erdogan’s power or a force that seconds Erdogan’s power grab. So far, the party’s political miscalculations—including delivering the message from Ocalan without forcefully demanding Turkish reforms in return—have only reinforced Erdogan’s claims that he doesn’t need to do anything to end the conflict and made it seem as if the Kurds are doing Erdogan’s bidding. What was billed as a historic message turned out to be more useful for Erdogan than for the Kurds.

HDP’s attempt to refashion itself as the new, broad liberal force for Turks and Kurds is faltering, endangering the party’s chance of getting enough votes to enter parliament. If HDP doesn’t make it to parliament in the general election in June, there will be little to stand in the way of Turkey becoming fully authoritarian. And with no Kurdish representation in the parliament in Ankara, Kurds will plan their own future, without Turkey.

Aliza Marcus is an expert on the PKK and author of Blood and Belief: the PKK and the Kurdish Fight for Independence.

Halil Karaveli is a Senior Fellow and Editor of the Turkey Analyst, at the Central Asia-Caucasus Institute & Silk Road Studies Program Joint Center.