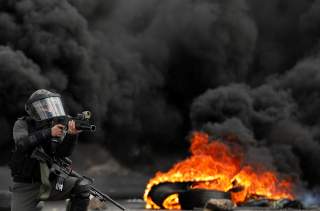 President Donald Trump’s decision last December to recognize Jerusalem as Israel’s capital, overturning seventy years of U.S. policy and international consensus, marked a turning point in the American-sponsored peace process between Israelis and Palestinians. As one of the thorniest issues of the conflict, as well as a powerful religious and political symbol for billions of people around the world, Jerusalem has long been seen as the key to a final peace settlement. Trump’s announcement was met with praise and jubilation on the Israeli side as well as anger and condemnation by Palestinian leaders, who have since declared that they would no longer participate in an American-sponsored peace process. In retaliation, the administration cut U.S. assistance to Palestinian refugees by nearly 80 percent while promising further aid cuts if the Palestinians do not agree to return to the peace process. The bulk of the international community meanwhile, including most European nations and Washington’s Arab allies, have lined up against Trump’s Jerusalem declaration. For its part, the administration has rejected accusations that the move was aimed at predetermining the status of the Holy City, insisting it was merely “recognizing reality.”

Trump’s Jerusalem declaration however was not a “new approach” to resolving the conflict, as the administration has claimed, but the culmination of the steady erosion of U.S. policy and declining effectiveness of American mediation during the last twenty-five years. The decision to recognize Jerusalem may be seen as an attempt to resolve the many underlying contradictions of the peace process, not by restoring the internationally-accepted norms on which it is based or working to level the playing field between the two sides, but by rewriting the rules of the diplomatic game. While the prospects of an American-brokered peace deal were already quite slim, Trump’s approach to the conflict may have finally convinced Palestinian leaders that they have more to lose by remaining in an American-dominated peace process than from walking away. The increasingly dim prospects for a two-state solution however are not without cost for the United States.

For decades, the world has looked to the United States as the only actor capable of brokering an Israeli-Palestinian peace agreement. This was true despite the uniquely close bonds between the United States and Israel and the extraordinary influence of the pro-Israel lobby on American decisionmakers, particularly on Capitol Hill. As peace process veteran, Aaron David Miller, put it, “We, the United States, may not be an honest broker, but we can be an effective broker.” This proposition assumed, however, that ending the Israeli-Palestinian conflict was in fact a major priority for the United States, if not a “vital” national-security interest as various administrations have claimed, and more importantly that American presidents were willing to overcome the constraints of domestic politics and the “special relationship” on at least those issues and moments that mattered most. Both of these assumptions were already in doubt before Donald Trump’s election and since his arrival in the White House have all but been laid to rest.

Since the early 1990s, the American-led peace process has operated on two core assumptions: first, that a credible peace settlement could be achieved without addressing the vast imbalance in power between Israel and the Palestinians, and secondly, that it would be possible (if not desirable) to subordinate internal Palestinian politics to the perceived needs of the peace process. Israel was not merely a party to a conflict but an occupying power that ruled over millions of Palestinians with whom it was negotiating. Yet throughout the last quarter century, successive U.S. presidents have been increasingly reluctant to use their considerable leverage with Israel to advance the peace process while actively working to prevent such pressure from the United Nations and other forums. This was based on a belief was that Israeli leaders would be more willing to “take risks for peace” if they felt secure politically and militarily. Not every president agreed with this logic, but most have adhered to it, whether out of conviction or as the political path of least resistance.

Whereas Israel’s special relationship with the United States was largely immune from the ups and downs of the peace process, Washington’s engagement with Palestinian leaders remained heavily dependent on both Israel and the peace process. It wasn’t simply that American officials had a “tin ear” for Palestinian domestic politics, for many policymakers on both ends of Pennsylvania Avenue peace would also require transforming certain aspects of Palestinian politics to turn them into a suitable peace partner. Given the Palestinian Authority’s (PA) heavy reliance on foreign aid and Israeli goodwill for its survival, Palestinian leaders were subject to an array of conditions and restrictions, many of which were enacted into U.S. law, regarding their security performance, internal governance and diplomatic activities.

In other words, the focus of American mediation was not on altering the basic political and power dynamics that sustain the conflict, including the central reality of Israel’s military occupation, but on reassuring Israel first and foremost and secondarily on reforming the Palestinians. But by removing pressure on the stronger party and increasing pressure on the weaker party, Washington effectively reversed the traditional role of a mediator. This was not an exclusively one-sided arrangement. As part of the bargain struck at Oslo, the Palestinian leadership, under both Yasser Arafat and Mahmoud Abbas, agreed to give up a degree of control over their internal politics and decisionmaking in the hopes that the United States ultimately would “deliver” Israel. Such deliverance did not come however. While there were times when U.S. presidents were prepared to use their leverage with Israel or boost Palestinian leaders to advance the peace process, most notably at the height of the Oslo process in the late 1990s, these have been the exception rather than the rule.

The Price of Failure: Clinton and Bush

This outcome was less a function of malice or ignorance than of simple political arithmetic. As the two most powerful actors bound by a special relationship, American and Israeli leaders had both the incentive and the wherewithal to shift as many of the risks and political costs onto the Palestinians as possible—especially when things went wrong. For a time, the Palestinians’ wager on American deliverance appeared to be paying off. Clinton broke with several taboos, hosting Yasir Arafat at the White House a dozen times and using his soft power to bolster Arafat while subtly bearing down on the hardline government of Benjamin Netanyahu. In the end, Clinton came closer to brokering an Israeli-Palestinian peace deal than any American president before or since. But he was also the first to erode the basic principles undergirding the peace process in a major way, including UN Security Council Resolution 242, which enshrined the “land for peace” formula and the sanctity of the 1967 border by giving tacit approval to Israeli settlement construction through exemptions for “natural growth,” East Jerusalem, and other loopholes.

Clinton’s most significant contribution, however, came in the final months of his presidency following the failure of the Camp David Summit and the outbreak of the Al-Aqsa Intifada. All three leaders were guilty of missteps and miscalculations during and after Camp David. However, Clinton’s decision to lay the blame for the failure of negotiations—as well the escalating violence—solely at the feet of Arafat and the Palestinians, while politically expedient, came at the expense of broader U.S. goals of stability and diplomacy. In addition to narrowing the political space for an agreement during Clinton’s remaining time in office, the decision helped cement the “no partner” narrative later seized on by Israeli prime minister Ariel Sharon and helping to fuel violence in the months and years that followed.

Despite the prevalence of the official Israeli narrative, Camp David was neither a “make or break” moment, nor was it the site of a “generous offer.” Instead, it was the start of a learning process for Clinton and the U.S. team that provided a basis for more serious negotiations in the months that followed. Moreover, Barak’s proposal for a Palestinian state on some 80–90 percent of the West Bank with limited autonomy in Arab East Jerusalem, while no doubt unprecedented in Israeli terms, fell well short of Palestinian demands. The fact that the most significant progress occurred after Camp David and after the outbreak of the Intifada was not a result of Arafat’s ability to squeeze the United States and Israel for more concessions through violence, as some have argued, but a function of the steep learning curve in Washington (and Israel) regarding the basic requirements of a credible peace deal. “Despite the mythology that’s been created since then,” recalled one American negotiator, “we weren’t even in the ballpark.”

Meanwhile, the escalating violence and mounting death tool of the Intifada simultaneously made the ongoing peace talks more urgent and less likely to succeed. As a result, by the time the Americans put forward a serious peace proposal in late December, the political environment was far less hospitable to peacemaking. Unlike Camp David, Clinton’s “parameters” for a final status peace deal, which envisioned a Palestinian state in Gaza and some 95 percent of the West Bank with Palestinian sovereignty over most of East Jerusalem, were “in the ballpark.” Although both leaders signaled a willingness to work with the Clinton Parameters while voicing reservations over particular aspects of the proposal, Barak’s response was regarded as a qualified “yes” and Arafat’s as “tantamount to rejection.”