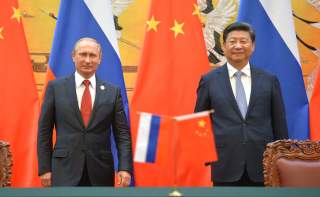 THE COMING Trump administration has deeply worrying aspects, but it also represents a magnificent opportunity to base U.S. foreign policy on the real interests of the American people, rather than what the Washington elites take to be the interests of U.S. global primacy. This is also necessary if President-elect Trump is to have any chance of fulfilling his promise to rebuild the prosperity of the middle class. Such a strategy will require Trump to jump backwards over a generation or more of U.S. policymakers and advisers—who have been responsible for disasters—and create his team on the basis of what Sen. Jeff Sessions claims is Trump’s basic philosophy, the realism of Henry Kissinger. It will also, however, require Trump to quietly shelve several of the threats he made during the campaign.

The biggest challenge is, naturally, China, especially given his campaign rhetoric. President-elect Trump has no choice but to push strongly for a new trade relationship with China (and other Asian states) that will do more to protect U.S. industry and jobs. China’s present economic downturn, among other things, will make this extremely difficult. The new administration will have to make compromises.

The disputed islands would be a good start. Under the Obama administration, the United States seems to have drifted inexorably towards supporting the territorial claims of Japan, Vietnam and the Philippines against those of China—a horribly dangerous position, and also, to some extent, an absurd one given the level of gratitude conveyed to the United States by President Rodrigo Duterte of the Philippines. Instead, the United States should base its strategy on three principles: the absolute sanctity of freedom of navigation in the South China Sea; recognition of those cases—like the Diaoyu or Senkaku Islands and half the Paracels—where China is, in fact, historically and legally in the right; and compromise on the rest.

All of this should be pursued within the general framework proposed by the Australian scholar Hugh White in The China Choice for a “concert of powers” in East Asia, based fundamentally on a U.S.-China entente, but including Japan and others. The Japanese won’t like this, of course—but are they really going to abandon the U.S. alliance? To ally with whom?

And then there’s the prospect of a new relationship with Russia. For reasons that should be apparent to anyone with the most elementary knowledge of Russian history and culture, Moscow is focused on Ukraine. There is no Russian threat to NATO members in eastern Europe or the Baltic states, if only because such a threat would draw the bitter enmity of Germany and destroy Russia’s most important international relationship.

And on Ukraine, the contours of a compromise are obvious. The United States can easily concede an agreement on Ukrainian neutrality, because NATO has shown again and again that it will, under no circumstance, fight to defend Ukraine—so the idea of NATO membership is vacuous. The populations of western Europe have shown that they have no will whatsoever to provide the massive amounts of aid necessary to put Ukraine on even the most lengthy of paths to EU membership. And in any case, the deep corruption and political dysfunction of Ukraine makes this an impossibility. Western strategy in Ukraine has actually made reform less possible, by destroying the economically vital links with Russia and helping to trap the government in a position of mobilization where it is dependent on ultranationalist militias and corrupt oligarchs for its survival. The Trump administration should therefore propose a reasonable deal based on the Minsk Agreement, leading to a federal Ukraine with guarantees for its Russian-speaking population, and enhanced autonomy for the Donbass.

An updated U.S.-Russia strategy towards Syria should be based on a new philosophical approach, of restoring strong states in the region—democratic if possible (they usually won’t be) but, in any case, strong. Only strong Muslim states with loyal and disciplined armies can suppress the forces of Islamist revolution—not because they are subservient to the United States or Western values, but for the sake of their own survival. Washington can best help such states from a distance. As Trump has promised, there should be no further U.S. ground interventions in the Muslim world.

If the Trump administration can rediscover the realist foreign-policy tradition, it may very well secure a fine legacy. If Trump manages to recognize the danger of climate change, he might even be remembered as a great president. This may seem unbelievable at present, but stranger things have happened.

Anatol Lieven is a professor at Georgetown University in Qatar and a senior fellow at New America. He is coauthor, with John Hulsman, of Ethical Realism: A Vision for America’s Role in the World (Pantheon 2006).