How 'The Rules of the Game' Can Help the U.S. Navy 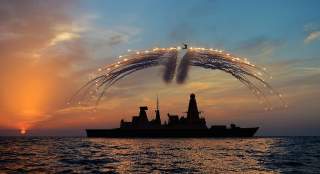 Why would any sane naval commander execute an order sure to bring about catastrophe?

That’s among the questions historian Andrew Gordon investigates in his masterful work The Rules of the Game. Ostensibly about the 1916 Battle of Jutland, The Rules of the Game is really about the perils of winning too big in sea combat. The history of Jutland is there, and in abundant detail. But it mainly serves to frame the author’s meditations on how a culture of automatic obedience dulls individual enterprise and derring-do to the detriment of battle effectiveness.

Gordon’s verdict: winning too big—as the Royal Navy did at Trafalgar in 1805—makes a navy intellectually flabby over time. It debilitates the institutional culture. Victory begets cultural decay by sparing the navy the rigors of future combat, the truest test of martial adequacy.

A smashing triumph, then, is a perverse thing. It permits and encourages the victors to entertain illusions about their profession. Seafarers come to believe command of the sea belongs to them by birthright. Trouble is, it’s doubtful the next ambitious maritime power that comes along, intent on making itself master of the briny main, will consent to permanent inferiority. It will mount a challenge—as powers on the ascent have since time immemorial. It could prevail. Even newcomers that fall short can prove troublemakers of the first order.

High-seas battle is a harsh teacher. Adm. John Richardson, America’s chief of naval operations, or top uniformed naval officer, hopes to spare the U.S. Navy the teacher’s rod by restoring its competitive instincts and habits in peacetime. Admiral Richardson reports embracing Gordon’s appraisal so fervently that he opened his own checkbook to put Rules of the Game back into print after it had lapsed. A career nuclear submariner, that is, went out of his way to make a chronicle of steam-propelled dreadnoughts pummeling one another in the North Sea available to today’s generation of readers.

What ideas inspired such a gesture? Gordon tells an intricate tale, dwelling in large measure on the prehistory of Jutland. Let’s concentrate on that prehistory as well. In 1893 the Royal Navy’s Mediterranean Fleet commander, Vice Adm. Sir George Tryon, was leading one of two parallel columns of warships on board his flagship, the battleship Victoria, in fleet exercises off the North African coast. Tryon’s second-in-command, Rear Adm. Albert Hastings Markham, was heading the second column on board the battleship Camperdown.

It was time for the fleet to moor for the night, but it was headed away from the anchorage. Tryon ordered a reversal of course to aim his ships toward the anchorage.

He opted for a maneuver sure to make seasoned mariners blanch. The two columns would turn toward each other in succession, meaning each ship would put its rudder over as it reached the point where the lead ship originally came about. The columns would reverse course by playing follow-the-leader. Tryon’s and Markham’s squadrons would once again be on parallel courses but would be steaming markedly closer to each other than before the volte-face. Then they would make a port (left) turn into the anchorage.

Or that was the idea. Gordon maintains that Tryon’s pirouette would have constituted a “perfectly safe plan” if the columns had started out at least ten cables—or one nautical mile—apart. In fact only six cables separated them. They couldn’t turn tightly enough to execute the maneuver—and yet Tryon ordered it anyway. And Markham complied. In fact, at least three officers—Markham, and the skippers of Victoria and Camperdown—saw the hazard bearing down on them. They nonetheless failed to act as “circuit breakers” interrupting certain disaster.

A primer on navigation and piloting will help explain what happened. Ships have turning circles, just as cars and trucks do. They have momentum, and no way to grip the water the way tires grip the road surface to make a tight turn. Even simple course changes demand foresight, consequently.

And familiarity with one’s vessel’s handling characteristics. A ship’s “tactical radius” is the distance it travels along its original course before steadying up on a new course 90 degrees to port or starboard. The vessel traces along a 90-degree arc of a hypothetical circle, as though swinging around the circle’s center on a tether. The center lies the length of the tactical radius away from the ship, on the side toward which the ship is turning.

In navigation as in grade-school geometry, the radius is half the diameter. A ship’s “tactical diameter” measures the perpendicular distance between its original course and its course after executing a 180-degree turn. Again the vessel traces around the circumference of a hypothetical circle onto its new pathway. Shiphandlers are—must be—intimately familiar with their vessels’ turning characteristics. They know that when the helmsman puts over the rudder X degrees while the vessel is steaming at Y knots, it will end up Z yards away after reversing course. Projecting such distances is crucial when plotting the ship’s position on the nautical chart—and thus crucial to avoiding an unpleasant encounter with a reef, seacoast, or nearby ship.

Seamen defy the laws of physics at their peril. The British Mediterranean Fleet battlewagons collided. Victoria plunged to the bottom, taking Sir George Tryon with her along with over half her crew. Camperdown nearly foundered as well but managed to limp back to port. A stunned Great Britain took to quarreling about what had gone wrong, while the British Admiralty convened a court-martial of the survivors.

The court went easy on the accused, unwilling to reprimand officers for following orders. It thereby missed an opportunity to apply a catalyst for introspection and cultural reform within the officer corps.

The court-martial’s best guess was that Tryon had mistaken the battleships’ tactical radii for their tactical diameters, tallied up the distances and concluded there was enough sea room for the maneuver. But each man-of-war’s tactical diameter exceeded three cables, while the ships were six cables apart. The arithmetic was plainly impossible. Some commentators speculated that the admiral suffered from a progressive mental disorder. One wonders.

Whatever the case, it is clear that the fleet commander committed an egregious human error that cost hundreds of sailors their lives and the Royal Navy a precious capital ship. What’s less clear, and more important and intriguing, is why his subordinates declined to intervene.

This is where culture comes in. Culture instills habits of mind and deed in the acculturated. Vouchsafes Gordon, debacles like the Victoria-Camperdown collision afflict officers whose upbringing and naval service habituate them to instant obedience to authority. Fleet sailors deified Sir George Tryon, and were habituated to unquestioning obedience. They couldn’t bring themselves to believe he was fallible—and thus hesitated at a critical juncture.

The irony: while perhaps worthy of veneration, George Tyron was the last thing from a martinet. Indeed, he sought tirelessly to inculcate initiative and entrepreneurship in flag officers and ship captains. Most notably, Tryon had devised a set of “action principles” meant to liberate the fleet from the intricately choreographed maneuvers that had become orthodoxy during the nineteenth century. His system went by the name “TA,” for the simple flag signal that instructed subordinates to operate independently in support of the flagship—and without detailed instructions.

This was anathema for traditionalists. Since the days of Lord Nelson the Royal Navy had codified its command-and-control philosophy in a set of long, dense, increasingly unwieldy signal books. Under the signal-book regime, commanders would issue orders scripting out fleet maneuvers. Signalmen would translate an order into elaborate flag hoists, run them up the flagship’s mast, give recipients time to copy and decipher the order, then haul down the flags to indicate when the fleet was to execute it.

Sounds logical, doesn’t it? Commanders command, subordinates do. In reality, though, this was an exercise in “scriptwriting,” one of the bugaboos of strategy. Admiral Tryon and kindred individualists pointed this out, though not in quite those words. Tryon lambasted the signal books as “barrack-yard, goose-step, parade-drill books” that would leave British mariners at a serious disadvantage when confronting foes steeped in independent judgment.

And so they were. Think about what a script is for, say, a Hollywood screenwriter: the writer writes what the characters should say and do, and that’s what the actors say and do. But what if the actors had no incentive to follow the script? What if, instead, they had every incentive to defy the script and wreck the production? That’s not a bad analogy to warmaking, an interactive realm where one foe does its damnedest to outwit and outfight the other. Improv beats scriptwriting!

Tryon and likeminded commanders leveled practical objections to centralized command. Even in peacetime, it could be hard to read flag signals. Masts could mask them from view. Distance from the flagship reduced their apparent size, making them hard to discern. And a ship directly upwind or downwind of the flagship would be altogether unable to read them: it’s hard to read a flat surface from an edge-on perspective.