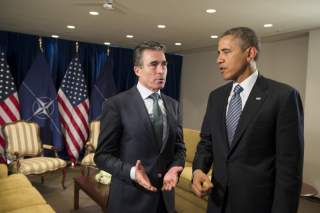 Leaders of the North Atlantic Treaty Organization met in Wales in the shadow of the Ukraine war. Alliance advocates hoped to use the conflict to revive NATO, but responded, as usual, mostly with promises.

In fact, Ukraine demonstrates how the military pact today makes Americans less secure. Expanding NATO to countries such as Georgia would multiply the risks faced by the United States for little gain.

The transatlantic pact was created at a particular time in response to a particular threat. Washington desired to “contain” the Soviet Union in the aftermath of World War II, which had left Europe devastated. An American shield would allow the continent to revive economically, but U.S. leaders, like President Dwight Eisenhower, worried lest the alliance make the Europeans dependent.

That fear turned out to be well grounded. European governments discovered that it didn’t matter how little they spent on the military or respected America’s priorities. Washington would keep them secure. NATO’s European members broke promises to devote more money to the military, built a natural-gas pipeline to the Soviet Union, aided Washington’s enemies in Latin America and blocked overflight by U.S. planes to bomb Libya. But the United States continued to defend the continent.

At least there was a plausible case that doing so was in America’s interest. While a Soviet attack on Western Europe seemed unlikely, Washington was determined to prevent any hostile power from gaining control of Eurasia. Better safe than sorry.

But that possibility disappeared with the Cold War. Russia lost a third of the USSR’s population. The military shrunk in size and diminished in effectiveness. Even more dramatic was Europe’s economic success and political consolidation. Today, the European Union enjoys an 8-1 economic advantage and 3-1 population edge. The Europeans don’t need America’s protection.

Yet U.S.-dominated NATO expanded through Central and Eastern Europe up to Russia’s borders. The new members added to Washington’s defense responsibilities without providing countervailing military benefits. Most notable were the Baltic States, which have troubled relations with large ethnic-Russian populations. Existing members never seriously considered the possibility that adding new members could lead to war with Russia.

Now the newly fearful Baltics and Poland are demanding “reassurance” that they will be defended by the original members, meaning the United States. These countries want permanent garrisons, which would act as tripwires ensuring that Washington will come to their defense if Moscow attacks.

While the alliance didn’t approve such deployments, member governments took a number of steps, which, explained Secretary-General Anders Fogh Rasmussen, demonstrated that “NATO protects all allies, at all times. And it sends a clear message to any potential aggressor: should you even think of attacking one ally, you will be facing the whole alliance.” This means America is willing to risk war with a nuclear-armed power to protect countries that matter little for U.S. security.

Yet expansion may not be over. Bosnia and Herzegovina, Macedonia, Montenegro and Georgia all want in. (Ukraine may join the parade, but until recently, both the government and public rejected the idea after a previous government applied for membership.) The first three matter little; they are small states threatened by no one and irrelevant to U.S. security. There’s no reason to induct them, but doing so likely would have little impact, positive or negative, on U.S. security.

Far more problematic is Georgia’s candidacy. Tbilisi has long courted NATO, even providing troops for the allies’ Kosovo mission. After the “Rose Revolution” the Saakashvili government accelerated cooperation with NATO and hired an adviser to Sen. John McCain as a lobbyist. At the April 2008 NATO summit, alliance leaders agreed that Georgia would eventually become a member.

Although the process then was derailed by the latter’s war with Russia, Tbilisi continued to press forward. Before the latest summit, Georgia’s ambassador to the United States, Archil Gegeshidze, argued that “the United States and NATO should …voice their support for Georgia’s Euro-Atlantic aspirations and provide a clear path for Georgia’s NATO membership.” Vice President Joe Biden met with Georgian Prime Minister Irakli Garibashvili and issued a statement supporting “Georgia’s NATO-membership aspirations.”

Although the allies did not approve a “membership action plan” or formal accession path for Georgia, they agreed to a “Defense Capacity Building Initiative” which, said Rasmussen, was “to reinforce our commitment to partner nations.” Citing Tbilisi’s cooperation with NATO, alliance members offered Tbilisi a promise of “Enhanced Partner” status. NATO’s “substantive package,” explained NATO Secretary General Anders Fogh Rasmussen, “will help Georgia advance in its preparations towards membership of NATO.” Rasmussen emphasized the desire to “enhance our cooperation.” The alliance intends to hold military exercises and create a training facility in Georgia.

Moreover, the White House announced that it was “working closely with NATO to develop more robust assistance and engagement programs” for Georgia, among other nations. The administration pointed to the U.S. European Reassurance Initiative, which was intended to build Tbilisi’s capacity “to provide for their own defense and increase interoperability with Western forces.” The United States planned “to intensify security assistance over the longer term.”

Nevertheless, NATO membership is not assured and Tbilisi remains frustrated with its slow progress. Before the summit, explained Defense Minister Irakli Alasania: “there’s a sense of disappointment in general that we’ve performed and contributed more than some NATO members.”

Georgia’s allies also are pushing for more. For instance, argued the Heritage Foundation’s Luke Coffey, the alliance should make clear that “As long as it meets the strict criteria, Georgia’s future is in NATO.” He urged continued training exercises as “a visible sign of NATO’s support.”

Yet no one in Washington seems to be asking the most important question: would adding Tbilisi to NATO make America more secure internationally?

Military alliances are not social organizations or gentlemen’s clubs. Rather, military alliances are supposed to enhance the security of their members. Which means the United States should only agree to add new defense dependents if doing so would better protect America or otherwise advance significant American interests. Bringing Georgia into the alliance would not do so.

The country is of no intrinsic strategic interest to the United States. Georgia was part of the Russian Empire and the Soviet Union. Washington never saw a need to promote Tbilisi’s independence. Georgia’s recent warm embrace of the United States does not increase the country’s geopolitical importance to America. Tbilisi’s relations with Russia raise humanitarian, not strategic, issues. Having another friendly regime on the Black Sea would be convenient for Washington, but would offer few meaningful benefits.

Gegeshidze argued that moving Georgia toward NATO membership would “increase stability and security in the region.” That would be true only if Moscow was thereby deterred from taking military action, including the asymmetrical forms of war employed in Ukraine. However, history is littered with examples of alliances that fail to deter adversaries.

Russia’s interest in Georgia will always be several magnitudes greater than America’s interest, which means Moscow will both risk more than America and doubt Washington’s willingness to go to war. Equally important, a security commitment could embolden Georgia to challenge Moscow. And any resulting conflict would be far more likely to draw in the United States.

Moreover, Georgia celebrates its role as America’s domestique in the latter’s misguided attempts at nation-building in Afghanistan and Iraq. (Tbilisi also has contributed independently to European military missions.) Bush administration aide Damon Wilson argued that it “would be incredibly shortsighted to wash our hands of” nations that backed America. Similarly, Coffey wrote: “The Georgians have earned this support.”

But Tbilisi’s contributions—though obviously welcome—do not warrant a U.S. defense commitment. Georgia’s Afghan contingent is significant for such a small nation, but would remain of limited benefit to the United States, even if that war was worthwhile.

Ironically, these efforts risk Tbilisi’s ability to deter Russian adventurism. Participation in war has given Georgian military personnel combat experience, but the country is configuring its forces for U.S.-oriented missions. For instance, last year, Tbilisi announced its intention to shift toward an antiterrorism workforce as part of the NATO doctrine of “Smart Defense,” leaving more conventional defense to others. Georgia should not give up defending against Russia in hopes that the United States and other members will fill the gap.

There’s also the international pique argument. Retired Adm. James Stavridis, former military commander of NATO, contended that it’s important to “show the Russians that Russia doesn’t get a vote on who gets into NATO.” No doubt, one shouldn’t let a potential adversary dictate with whom one allies. However, the likelihood of conflict between a potential nuclear-armed adversary and a potential ally of no strategic importance should affect Washington’s assessment of the security value of an alliance. In this case, the costs would be far greater than the benefits for America.

Georgia has offered to exclude Abkhazia and South Ossetia, separatist territories backed by Russia, from the alliance’s Article 5 guarantee and made a “non-use of force” pledge toward the two. However, having promised to defend Georgia, the United States could not easily renege based on its assessment of Tbilisi’s behavior in a complex international confrontation. One can imagine the cries of lost credibility from the war lobby if Washington left a treaty ally in the lurch.