How the U.S. Can Help Solve the Ukraine Crisis: Treat Ukraine Like Georgia? 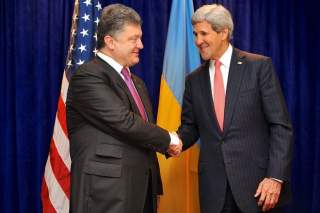 In August 2008, when Russia’s military appeared to be preparing to move through the Roki Tunnel from Russia into Georgia’s South Ossetia, Bush administration officials told Georgia’s then president, Mikheil Saakashvili, “don’t get drawn into a trap” and “don’t confront the Russian military.” They quite correctly feared that what one official termed “a ‘Guns of August’ scenario’” could lead to full-scale war and Georgia’s defeat. Yet today, some seem to think that the United States should take the opposite approach in Ukraine or even to imply that the Obama administration should not have discouraged Kiev from resisting Moscow’s seizure of Crimea from a position of great weakness. Few explain why Ukraine’s escalation—with or without lethal U.S. military assistance—would not spring the same trap that the Bush administration encouraged Georgia to avoid. Even fewer describe what America would have to do to prevent Ukraine’s defeat in a wider war. This does no favors for either the United States or Ukraine.

Perhaps most striking in the Ukraine crisis is the extent to which Western leaders and politicians and pundits agree that “Putin must be stopped” while expecting someone else to do the work. NATO’s new “front line” states in Central Europe appear eager for the United States to arm Ukraine, but reluctant to become too involved themselves (or, for that matter, to increase their defense budgets commensurately with the threat they describe). Western European governments want the United States to take the lead, but don’t want to follow Washington into anything too costly, and the European Union is providing Ukraine with less than 1 percent of the assistance it has committed to Greece. In fairness, Ukraine’s economy is somewhat more than half Greece’s, and Ukraine is not an EU member. Still, Ukraine’s population is four times higher than Greece’s and many European officials describe its fate as almost existential for Europe.

No small fraction of America’s political leaders, including senior officials in the Obama administration, are ready to arm Ukraine, but few if any are willing to send U.S. troops into combat; in other words, they are fully prepared to fight Putin—to the last Ukrainian. Or perhaps to the last dollar that the Congress would authorize for this purpose, a limit that they would likely see sooner, since recent legislative proposals call for about $60 million for offensive weapons out of $300 million in total assistance.

These political realities across NATO’s democracies raise two fundamental questions about policy toward Russia and Ukraine.

The first has to do with commitment and it has two components. Do the “hawks” seeking to force the administration to spend $60 million—roughly equivalent to the proposed 2016 budget for Washington DC’s public libraries—and like-minded Europeans think that minimal commitments like this will do the job? After spending hundreds of billions of dollars to fight nonstate adversaries in Iraq and Afghanistan, with military capabilities considerably inferior to Russia’s, U.S. and European assistance to Ukraine is either a fig leaf or a very small down payment.

In the former case, if $60 million is all that America as a nation is willing to spend to defend Ukraine, we would be better off admitting this to ourselves sooner rather than later. A half-hearted policy (or, for that matter, a 5 percent–hearted policy) to confront Moscow will likely produce outcomes demonstrably worse than a settlement—better to get the most advantages possible negotiated terms than to set up ourselves and the NATO alliance for a high-profile defeat.

Conversely, if the advocates of this course see small arms deliveries as the first step in a substantially broader effort, they should be honest with the American people about their proposed objectives and the costs and benefits they foresee. If the United States is to make confronting Russia an organizing principle of its foreign policy, it will require an extended national commitment that will be unsustainable without broad public support (and difficult to pursue without virtually nonexistent European public support). Indeed, if advocates of this approach believe that a nuclear superpower—notwithstanding its other weaknesses—has already made an analogous national commitment to confront the United States, as many of them argue, it is difficult to understand why they have not done this already. If Moscow has indeed made such a choice, which does not seem very likely, it would be a much graver threat than Iran or the Islamic State.

The second fundamental question about our policy toward Russia and Ukraine is a moral one. If the United States is not willing to make a commitment to defending Ukraine sufficient to ensure success, how can we encourage Ukrainians to fight and die in a conflict with a very powerful neighbor and with no clear endpoint? Allowing the government in Kiev and the Ukrainians resisting Moscow to think that America is behind them when we are not—or when we are pretending to ourselves that we are—is functionally equivalent to encouraging the 1956 uprising in Hungary, or the 1991-92 Shi’ite uprisings against Saddam Hussein, and then watching the devastating consequences for the courageous people who believe us. Making a moral case to assist Ukraine without answering tough moral questions about outcomes means pursuing “the histrionics of moralism at the expense of its substance,” as George Kennan put it.

The George W. Bush administration, which was not shy in making moral arguments about U.S. foreign policy, appeared to follow this logic in Georgia in 2008. Why shouldn’t the Obama administration do the same in Ukraine?

Most important, being honest with ourselves, with our allies and with Ukrainians does not mean acquiescing to Russia’s conduct or giving up. On the contrary, it is the first step in building a policy that can work in protecting U.S. national interests and strengthening European security. Reckless rhetoric or—worse—reckless action helps no one but the Kremlin hawks looking for an excuse to escalate the fighting and a means to distract attention from their own failings. Washington should discourage Kiev from providing either.

Paul J. Saunders is executive director of the Center for the National Interest and associate publisher of The National Interest. He was a State Department senior adviser and political appointee during the George W. Bush administration.