How the U.S. Military Can Save $1 Trillion 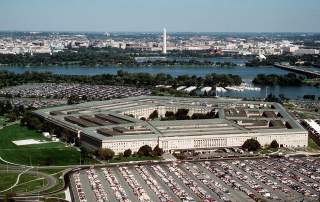 The United States could reduce Pentagon spending by over a trillion dollars in the next decade—spending $5.2 trillion rather than the currently planned $6.3 trillion— by adopting strategy of military restraint. That’s the bottom line of a study I produced along with several colleagues as part of “Developing Alternative Defense Strategies 2016,” an exercise organized by the Center for Strategic and Budgetary Assessments, where groups from five think tanks used CSBA’s “Strategic Choices” software to reimagine the U.S. military budget.

The others all increased military spending. The teams from the Center for New American Security and the Center for Strategic and International Studies added a few percent—tens of billions a year for the decade. CSBA’s team added about ten percent, and the American Enterprise Institute’s twenty.

Why was the Cato team such an outlier? Unlike the others, we reject the United States’ current grand strategy of primacy, or liberal hegemony. The others differ on spending details but agree that U.S. security requires global stability maintained everywhere by U.S. military activism, meaning alliances backed by garrisons and threats, naval patrols, and regular military interventions in unruly places.

Our proposal, by contrast, follows from the grand strategy of restraint. That starts with restraining ourselves from the temptations that great power affords— making war less often and more deliberatively, deflating our definition of security so it is distinguishable from global dominance and ceasing to insist that we alone can boss humanity.

Restraint differs from primacy on four key points. First, rather than seeing U.S. security as precarious, restraint says that U.S. geography, wealth, and technological prowess go far to secure the United States from attack. Second, restraint sees military force as a blunt tool good for destroying and deterring enemy forces, not a fine instrument that reorganizes other nations. Hence restraint eschews wars meant to stabilize fractured states or liberalize oppressive ones. Third, restraint is skeptical about permanent alliances. U.S. alliances were vital to matching the power of threatening hegemons, like Nazi Germany or the Soviet Union, but they should generally end as enemies fade and allies become capable of self-defense. U.S. protection has becomes a subsidy for the rich. It can encourage allied recklessness that can embroil U.S. forces in needless war. Fourth, global trade is robust and not dependent on the protection of nearby U.S. military garrisons and naval patrols. U.S. forces should protect trade routes during conflicts, but almost nothing threatens peacetime trade. If disruptions do occur, new suppliers and routes typically become available, thanks to trade globalization.

A U.S. military molded by those insights would need far less force structure, personnel, operational funding, administrative support and real estate. But our cuts were not indiscriminate. We tried to shift U.S. military spending to take advantage of the nation’s geopolitical advantages. Distance from trouble and technological prowess means we can afford to wait and let others man their own front lines. When U.S. forces go to war, they should attack from the continental United States or oceans and avoid lingering in occupation.

Those insights recommend a sea-based defense, so we shrunk the Navy less than other services. Nonetheless, we cut about a quarter of its ships and manpower. That’s possible because under restraint, the Navy would operate as a surge force that deploys to attack shorelines and to open sea-lanes when necessary rather than conducting constant “presence” patrols. We retired the four oldest aircraft carriers over the ten-year period and cut twelve amphibious ships from the fleet. We cut destroyers, cruisers and other ships to reflect the reduction in carrier strike groups and attack submarines somewhat less due to their evasiveness and usefulness for a variety of missions.

We cut the other services by about a third each. Our cuts to the Army and Marines reflect avoidance of protracted and mostly unilateral nation-building missions and the dearth of threatening ground forces. We cut the guard and reserve slightly less than active ground forces because we believe there will be time to mobilize in the event of a very large war.

Our cuts to the Air Force reflect both a reduction in enemies under restraint and technological progress. Revolutionary gains in bomb accuracy mean that far fewer aircraft and sorties are needed to destroy targets. And we want fewer targets. Moreover, carrier-based air forces can now target most of the earth and accomplish much of what land-based fighters do. So we cut fighter numbers in particular and retained relatively more long-range capability—lift and refueling aircraft. We cut bombers substantially, but retained the future bomber program.

While we cut the U.S. military’s size, we strove to retain its technical edge. We protected research and development funds and continued programs that replace or update older weapons systems, albeit in lower numbers. We did, however, end several procurement programs due to their expense and lack of return. In place of the underperforming Littoral Combat Ship, we bought a cheaper frigate. We ended production of each F-35 variant and instead kept A-10s and bought new F/A-18 Advanced Super Hornets and F-16E/Fs. The F-35’s excessive complexity and costs are not worth its advantages in stealth and sensors. Long-range strike from other aircraft and missiles already provide tremendous capability against sophisticated adversaries, and few U.S. adversaries are that.

We saved big by shifting from a triad of nuclear weapons delivery vehicles to a monad consisting of ballistic missile submarines. Our strategy would involve threatening mass destruction against fewer nations. But the case for a monad does not require restraint. No adversary can reliably track U.S. ballistic missile submarines, let alone do so well enough to attempt a preemptive strike against all of them. The trident missiles on the submarines are accurate enough to preemptively destroy enemy nuclear forces, especially as aided by conventional U.S. missiles.

An obvious output of restraint is reduced overseas base structure. Our plan eliminated most overseas bases over the ten-year period. The savings there come less from real estate costs, which are today partly covered by allies, than from the eventual reduction in military personnel manning those bases. We also selected the Base Realignment and Closure option. Our smaller force structure justifies base closures even beyond that.

To dovish critics of U.S. defense policy, our seventeen percent cut to Pentagon spending may seem lacking. Shouldn’t such a broad critique of current strategy yield bigger savings? One answer is yes, we may be guilty of being overly conservative. Restraint likely allows even deeper cuts.

Another is that our cuts are larger than they seem. Reasoning that gradual cuts would ease adjustment, at home and abroad, we spread ours over the decade. Seventy percent of the savings come in the second five years, and annual savings would grow beyond the exercise’s 2027 end date. Moreover, the exercise only allowed cuts in three-fourths of the official “defense” budget. We could have saved another $70 billion a year or so if we’d been able to target intelligence spending ($72 billion this year), Overseas Contingency Operations ($59 billion) and nuclear-weapons spending in the Department of Energy ($20 billion.)

To defense insiders in Washington, our proposal seems radical and even “isolationist,” as Loren Thompson argues. That claim is false, given that, unlike isolationists, we favor free trade, heightened immigration and robust diplomacy. Radical is more reasonable, especially as our plan comes alongside four proposals by leading experts, all calling for higher military spending. They reflect a strong bipartisan consensus in the foreign policy establishment, where the big divide is between those who believe that our security requires a tremendous margin of military dominance and those who think we need more.

What’s truly radical, however, are the claims sustaining that consensus: that the United States can’t secure itself for less than $600 billion; that security is indivisible, and that no foreign region can achieve lasting stability, liberalism and prosperity without U.S. military protection. The real danger is our defense strategy, which siphons national wealth from more beneficial ends and thrusts the United States into needless trouble. Today, at the close of an administration that most foreign policy analysts criticize for its passivity, the United States is making war in seven nations and has been at war continuously for fifteen years at a cost of 7 thousand American troops killed and over 50 thousand wounded, plus many more foreigners killed or hurt.

A more restrained strategy would have avoided most of those losses without sacrificing U.S. security, which makes them doubly tragic. The United States would also have saved much of the two and half trillion dollars that paid for wars over the past fifteen years, another two to three trillion in reduced Pentagon and veterans spending. Restraint also would have protected U.S. civil liberties from the erosion that continuous warfare predictably produced.

Those losses are irredeemable but instructive. The trouble wasn’t their unsustainability. The United States is rich enough to have sustained far greater losses without economic calamity. Safe and rich nations like ours can afford all kinds of harm but that doesn’t make it wise. The trouble was the diversion of people and resources from an array of alternative activities collectively more conductive to general welfare. By embracing our geopolitical fortune, rather than going out looking for troubles to manage, we could enhance our security and reallocate vast resources to more productive uses.