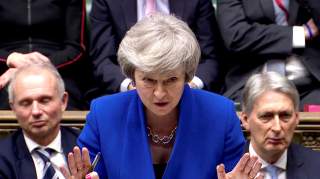 British Prime Minister Theresa May just suffered the most crushing defeat in modern United Kingdom political history when Parliament voted down the proposed Withdrawal Agreement under which Britain would exit the European Union. Although May survived a subsequent no-confidence vote proposed by Jeremy Corbyn, leader of the opposition Labour Party, the UK has been plunged once again into political chaos. Predictions are a fool’s game in this super-charged moment, but I suspect that some form of leave agreement looking not too different than May’s seemingly-dead proposal is still the most likely outcome for Britain.

Here’s why. While the original deal is no one’s first choice, it is perhaps the only available option that is not completely toxic to one or another of the key political groups. The alternatives are to leave with no deal; remain in the EU; or to come up with another deal. Yet another deal must be good enough to be accepted by all the major players in the UK and then by all twenty-seven member nations of the EU. None of the alternatives seem remotely likely.

By default, Britain will leave the EU without a deal on March 29. But this would almost certainly lead to economic and social chaos, with disruptions to trade, food distribution, healthcare, and power supplies. A significant number of Brexit supporters, lead by the European Reform Group faction of Tories, would accept such disruptions, either dismissing the predictions as scaremongering or considering them a price worth paying for restored sovereignty. But No-Deal is anathema to business leaders and, more importantly, a large majority of Members of Parliament (MPs), who are trying to find ways for Parliament to block it.

There are only three ways Parliament can prevent a No Deal exit. One would be to remain in the EU, legally possible by revoking Article 50. But the European Court of Justice has ruled that such a revocation must be permanent, meaning Britain must agree to remain in the EU forever, an outcome completely unacceptable to May, most Conservative and many Labour MPs, and of course the majority of the country who voted Leave. The second option would be to extend the March 29 deadline, which the EU has signaled it would be willing to grant only for a specific purpose such as to hold a second referendum or a general election. Embarking on either of these routes would need parliamentary approval, which is very unlikely given the hostility of the executive and the majority party. Moreover, neither is likely to produce a clearer or more generally acceptable outcome.

An election would at best produce a new prime minister who would be in the exact same dilemma as May is now. What cunning new plan would she or he have? Corbyn promises he could get a better deal but says nothing about how. A second referendum would be extraordinarily divisive and difficult to pull off. Even the choice of questions would be hostage to deadlock. And it wouldn’t necessarily result in a different outcome anyway: the numbers of leavers and remainers have not changed much since the referendum. Also, I sense that there is little enthusiasm for a second referendum outside the Westminster bubble: many people seem completely sick of the whole process, angered that other problems such as NHS funding or the housing crisis have been left unattended for too long. For instance, my father, an avid follower of politics, just declared his house a Brexit-Free Zone.

Which means that the only real way to stop a no-deal Brexit is to agree to another deal more acceptable to all parties. What would such an agreement look like? First, it would have to guarantee that there would be no “hard” customs border between the Republic of Ireland and Northern Ireland, which all sides fear could lead to a breakdown in the fragile peace won by the 1998 Good Friday Agreement. Without such assurances, the EU would never sign on. Second, it must allow the UK to control immigration, without which the Conservative Party would never sign on. In practice, this means the deal would have to keep the UK out of the EU's Single Market, which mandates freedom of movement across borders.

May has decided to push ahead and will be consulting with all parties and the EU. A new deal, probably including changes to the language of the Northern Irish "backstop" agreement, is arguably the best possible deal which Britain and the EU could agree to which comes even close to meeting all of the essentials while at the same time delivering relatively smooth trade relations in the short and medium term. There are plenty of alternative plans out there which may make more economic sense (Norway plus, Switzerland, etc.), but none are more politically feasible.

A final factor which makes May’s deal more likely is that despite her recent crushing defeat; May is still the most powerful political player in the UK. Having survived the No Confidence vote in Parliament and a recent Party leadership challenge from the hard-Brexit right, she cannot be forced out of office unless something drastic changes. Other groups can wield effective veto power but none have the resources and support needed to push through a mutually acceptable alternative proposal. Labour is the only party large enough to challenge the Conservatives, but they are themselves deeply divided, led by a pro-Brexit leader who has consistently prioritized becoming prime minister over articulating alternative policies to May’s.

Brexit: Uncivil War caused a stir when it aired last month. The TV movie, soon to air on HBO, tells the story of Leave’s shock victory in the 2016 Referendum from the perspective of Dominic Cummings, campaign director for Vote Leave. Cummings is played by none other than thespian heartthrob Benedict Cumberbatch, better known to TV viewers as Sherlock. Many remainers were furious at the casting selection, which seemed to lend a patina of benign genius to someone they regard as pure a Moriarty. But the coincidence at least reminds us of one of Sherlock Holmes’s best-known aphorisms: once you’ve eliminated the impossible, whatever remains must be the truth, no matter how improbable. Passage of anything like May’s deal certainly looks highly improbable. But it may be the only politically possible option left.

Henry C.W. Laurence is an associate professor of Government at Bowdoin College and is from the United Kingdom. He received a Ph.D. in Political Science from Harvard University and a BA from Oriel College, Oxford University. His current research is on media and politics in Britain, Japan, and the USA.