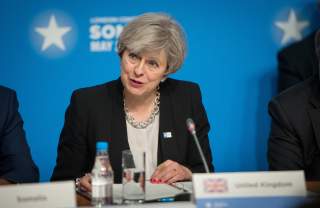 Wanted: Candidates for higher office who can exhibit traces of humanity. Charisma and warmth not necessary; candor and conviction required. Applicants must demonstrate an ability to show voters who they are rather than what they think they’re wanted to be. Documented proof that you aren’t a Cylon or a Vulcan should be submitted with other requested materials.

British Prime Minister Theresa May might have secured enough parliamentary seats to form a minority government last night, but she’s nonetheless the loser of a general election that shredded twelve of her MPs when she should have been riding a landslide. The reason is that she spectacularly flunked the above qualifications. May and the Conservatives didn’t so much run for higher office as mechanically lumber their way there, announcing over the loudspeakers that everyone would be assimilated and leaving in their wake an effluvium of contempt for the voters. It was one of the worst campaigns I’ve ever seen in a Western country.

In an age with abundant political fruit to be picked—immigration, terrorism, Brexit, disdain for elites—May somehow managed to be almost wholly devoid of coherent thought. Why vote Tory? There was the obvious need for a steady presence at the European Union negotiating table, but beyond that it was all sinister static about May being “strong and stable” and Jeremy Corbyn being an IRA-loving monster. Except then voters got a gander at Corbyn, and discovered he was actually rather affable and many of his ideas made a fair amount of sense. Facing an expectations bar that May had set at ground level, Corbyn neatly hopped over it.

The Tories thought they could convert England’s rust-belt northern towns by appealing to their passion for Brexit; they forgot those same areas are economically struggling and many have taken hits from tighter Conservative budgets. Cue Corbyn with his alluring Robin Hood rhetoric, and May chiding a nurse who hadn’t seen a salary raise in eight years that “there is no magic money tree.” Brexit might have been an important issue, but it was hardly the electorate’s monomaniacal focus, and Conservatives ended up ceding just about everything else there was to Labour.

It was a comedy of errors for the Tories, who managed to appear simultaneously as heartless brutes and fumbling dopes—and nowhere so harmfully as when they proposed a cap on social care for elderly pensioners that Labour quickly dubbed a “dementia tax” before clumsily flip-flopping a few days later. That policy gem originated in the ruinous Tory manifesto, which carefully attuned itself to the plight of the working class by promising a vote on Britain’s foxhunting ban. Even last week’s terrorist attack in London, which should have allowed Conservatives to switch on the spooky music and posture as tough, wasn’t enough to cauterize all the self-inflicted damage.

That May is even forming a minority government is a credit not to her but to Ruth Davidson, the charming and steely leader of the Scottish Conservatives, who nabbed thirteen seats north of Hadrian’s Wall, up from one in 2015. Most of them came at the expense of the Scottish National Party, which was chopped to pieces last night. And that’s the first takeaway here: Scottish voters have grown weary of the SNP’s endless threats to hold another independence referendum. Among their casualties were SNP Commons leader Angus Robertson and former SNP chief Alex Salmond, both of whom lost to Conservatives.

Also intriguing is how Britain is winnowing its political space down to a binary choice. Third parties did horribly last night, with the Liberal Democrats failing to amass the pickups they’d hoped for and the United Kingdom Independence Party (UKIP) getting wiped out, no longer necessary in the eyes of voters now that its purpose of Brexit has been fulfilled. Worth noting, too, is that the old security-hawk rhetoric no longer holds; Corbyn did not suffer for acknowledging that the West’s hawkish foreign policy has bolstered terrorism, nor even for his prior naïveté over Hamas and Hezbollah.

The reality really is flabbergasting: Labour last night won its biggest vote share since Tony Blair’s 2001 rout, eclipsing anything accomplished by Ed Miliband, all under the stewardship of . . . Jeremy Corbyn. Ladies and gentlemen, feed your playbooks into the nearest shredder. And that brings us to the main reason for the Tories’ implosion: May ran the sort of algorithmic campaign that flashed back to Mitt Romney in 2012. Political consultants love this sort of candidacy, because they get to program the empty-suit politician with their focus-grouped banalities and trite slogans, while avoiding the ideological sudden moves that make them nervous.

According to this way of thinking, conservatives win not by espousing any sort of conviction but by pummeling the other guy and presenting themselves as nebulous yet acceptable alternatives. That Barack Obama prevailed should have discredited this school; that Jeremy Corbyn triumphed should destroy it once and for all. Voters tend to be very good at detecting when they’re being played, and that impression was pungent from every rotten corner of May’s campaign. As Peter Hitchens wrote in a prescient column two years ago, Corbyn is formidable because he doesn’t do this, because he fulfills the electorate’s “hunger . . . for principled, grown-up politics instead of public relations pap.” Last night, it was Corbyn versus the consultants and the side with a soul won out.

So now Brexit is more perilous than before. EU negotiators are sizing up an enfeebled May freshly vulnerable to left-wing pressure and backbench mutiny. Remainers will claim this election as a repudiation of so-called “hard Brexit,” even though it probably isn’t. And a round of firings at Conservative headquarters will be in order. They’ve been well earned.