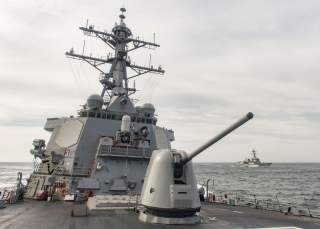 With the nominations of ExxonMobil’s Rex Tillerson and retired Gen. James Mattis to become the next U.S. secretaries of state and defense, respectively, President-elect Trump has identified his senior national-security team. If confirmed by the Senate after last week’s hearings on Capitol Hill, that team will begin the critical and time-sensitive task of establishing a solid strategic footing from which to launch the new administration, to include prioritizing national-security objectives aligned with the incoming president’s vision and steering the elements of U.S. national power to best achieve those objectives.

A foundational question they should consider is the level of importance the new president should place upon keeping America’s access to the world’s oceans free and open, which has long been a cornerstone of American foreign policy. In a quest to “make American great again,” how should the incoming president and his administration protect the freedom of the seas most effectively? Outlined below are six concrete steps to consider.

First, he should declare early and clearly that protecting America’s maritime freedom around the world is a priority national interest. The current administration was slow to highlight the importance of maritime freedom, but its recent messaging has been more emphatic: “The United States will continue to fly, sail, and operate wherever international law allows.” Continuity in messaging on this fundamental element of U.S. foreign policy is critical. Thus, President Trump should explicitly address maritime freedom, both in public remarks during the first days of his administration and in his eventual National Security Strategy. If the new administration waits until a world situation threatens America’s maritime freedom, then it will appear as though this American interest is purely reactionary and not foundational in nature.

Second, he should quickly recalibrate America’s diplomatic and operational actions to reinforce that message. Public statements alone do not convey a message effectively on matters of national security. Other nations in the world, including allies, partners, competitors and potential adversaries alike, watch what the United States does and, equally importantly, what it does not do when carrying out its foreign policy. As the chief diplomat, the incoming president should overcome the reluctance among some U.S. embassies and State Department country desks to highlight differences with their foreign counterparts. Part of “putting America first” means explaining to governments around the world the priorities of American foreign policy, including the long-standing U.S. policy to preserve maritime freedom.

Given the trend of creeping jurisdiction among some coastal nations, the State Department under the Trump administration should issue a global démarche to capitals around the world that emphasizes America’s commitment to preserve maritime freedom globally. Additionally, the new commander-in-chief should consider increasing the operational tempo of freedom-of-navigation operations in every region of the world. The world has witnessed the United States conduct a series of freedom-of-navigation operations in the South China Sea over the past year, but it has also read press reports of “differences of opinion” between the current White House and the Pentagon over the frequency and location of those operations. In short, strong words must be backed up with persistent diplomatic and operational actions.

Third, he should prepare for an early challenge by a foreign power to America’s commitment to maritime freedom. This challenge could come from one of a number of nations, such as Russia, Iran, or North Korea. But a likely candidate for challenging that commitment is China: seventy-one days into George W. Bush’s presidency, a Chinese fighter jet collided with a U.S. Navy aircraft conducting lawful military activities in international airspace; forty-seven days into Obama’s presidency, five Chinese vessels surrounded USNS Impeccable conducting lawful military activities in waters beyond any nation’s territorial sea. Most recently, during the Obama-Trump transition period, a Chinese Navy vessel seized an unmanned underwater vehicle that the USNS Bowditch deployed for military surveys in waters beyond any nation’s territorial sea.

Fortunately, in the final years of the Obama administration, China and the United States have made significant progress in promoting safe interaction between their military vessels and aircraft, including a bilateral memorandum of understanding for safety of air and maritime encounters and a multilateral Code for Unplanned Encounters at Sea. Yet China continues to oppose the U.S. military presence in the waters of East Asia. The new president should reaffirm that the International Collision Regulations, the CUES and the bilateral MOU reflect the only acceptable standards of behavior. He should also put Beijing on notice that its maritime militia should not be employed as a proxy to increase the risk of misunderstanding or escalation. The sensationalized moment of a vessel collision is not the time for a rational discussion about the responsibility to behave safely at sea.

Fourth, he should call upon America’s allies to help protect maritime freedom around the world. Candidate Trump declared that, if elected as president, he would be “respectfully asking” U.S. allies to “pay more for the tremendous security we provide them.” The issue of a shared contribution to security is also worth considering in the context of preserving open access to the world’s oceans. While maritime freedom is a converging security and economic interest among like-minded nations, the burden to protect that freedom has not been shouldered equitably. The new president should “respectfully ask” his foreign counterparts to do more to protect maritime freedom, including their share of diplomatic protests and freedom of navigation operations. Otherwise, it could appear as though some U.S. security allies are merely “free riders of navigation.”

Fifth, he should prioritize America’s accession to the Law of the Sea Convention, which codifies maritime freedom into international law. This action item is critically important for reasons of national security, energy security, and economic opportunity. As commander of U.S. Central Command, then General Mattis told the Senate, “We owe our Soldiers, Airmen, Marines, and Coast Guardsmen fixed treaty-based rights instead of relying on the threat of force or customary international law.” Unfortunately, some Republican Senators have blocked an accession vote for years, primarily on ideological grounds. But the incoming president campaigned as an outsider who could break gridlock, depart from “business as usual,” and put America back to work. He also spoke about seeking out “untapped potential” to increase America’s economic growth. Such potential could include the oil and mineral resources extractable from the seabed of world’s oceans.

Understandably, American companies are unwilling to assume the risk of exploring seabed areas, given that foreign companies could piggyback at successful sites. Yet competitor nations who are parties to the convention, such as China, are lawfully taking advantage of exclusive seabed licenses. If the United States joins the convention, then it too could leverage the freedom to tap into the economic potential of those maritime areas, create American jobs extracting energy and other natural resources and converting them into high-technology goods, and expand the American economy. As chairman and CEO of ExxonMobil, Tillerson told the Senate that accession to the convention is “important to our company—and arguably to America’s energy security.”

Sixth, he should increase America’s capacity to protect maritime freedom by working with Congress to grow the operating forces of the Navy, Coast Guard and Air Force. Maritime presence and maritime freedom are interrelated concepts: access enables presence, and presence preserves access. Thus, more ships and aircraft in the U.S. military means a greater capacity to maintain a global presence that protects maritime freedom. The incoming president campaigned on building up the military. Yet the new administration should avoid assuming that buying more ships and aircraft is the only way to preserve America’s maritime freedom. If the United States waits until it has more operational forces before taking action to protect its maritime freedom, then that national interest could be severely eroded in the interim.

If maritime freedom is essential to America’s security and economic future, then he should consider each of these six steps, along with any other available means, to effectively protect that fundamental freedom.