How Trump Can Rebuild American Strength at Home 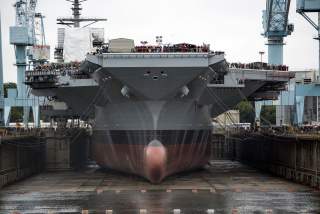 The Cambridge Union, one of the oldest debating societies in the world, hosted a debate last week on the future of American hegemony.

In his inaugural address, Donald Trump seemed to foreshadow its end. Not in the sense that he wants less military power. He says he wants more. But American hegemony has been premised for decades on the notion that Washington would take other countries’ interests into consideration when it acts. DC’s foreign policy elites convinced themselves that the vast majority of countries benefit from U.S. hegemony, and thus few have anything to fear from America when it exercises its power.

Donald Trump, in some of his first words as president, turned his back on these ideas:

For many decades we’ve enriched foreign industry at the expense of American industry, subsidized the armies of other countries while allowing for the very sad depletion of our military.

We’ve defended other nations’ borders while refusing to defend our own and spent trillions and trillions of dollars overseas while America's infrastructure has fallen into disrepair and decay. . . .

Every decision on trade, on taxes, on immigration, on foreign affairs will be made to benefit American workers and American families. . . .

We will seek friendship and good will with the nations of the world, but we do so with the understanding that it is the right of all nations to put their own interests first.

As I’ve written previously, the notion that American leaders should subordinate this country’s interests in its foreign policy was a fatal flaw at the heart of Pax Americana, one that Donald Trump exploited ruthlessly during the course of his successful presidential campaign. In that sense, no one should have been surprised by President Trump’s inaugural address. It was strikingly similar to his stump speeches.

But even if Donald J. Trump had not been elected president, his emergence on the American political scene posed a challenge to an international order that had grown overly reliant upon U.S. military power. Indeed, given Trump’s remarks during the campaign and since his election, one might think the mere possibility that America’s obligations within the NATO alliance, for example, might be open to interpretation should have encouraged European leaders to hedge their bets.

But we haven’t yet seen that. And so we have the awkward spectacle of Angela Merkel, who, in response to Trump’s latest rantings about NATO’s obsolescence, stated, “I think we Europeans have control of our destiny.”

One would hope so.

Up to this point, however, they and other have relied on a U.S. political system over which they had no control. The fact that the old arrangement endured for decades didn’t mean that it was permanent or popular here in the United States. But now the bills are coming due.

The U.S. military, the largest and most powerful in the world by a wide margin, is allegedly starved for cash. President Trump wants to fix that.

How to pay for it? For American hegemony to persist, its defenders must tell the American people to accept cuts in popular domestic programs, higher taxes, more government debt, or all three of these things, all so that our allies don’t feel the need to defend themselves.

It seems unlikely that Americans will buy into that arrangement—and Trump seems disinclined to ask them to do so. Americans have never been strongly supportive of the idea of being the world’s policeman, but the issue has rarely had political salience. American elections are not won or lost on a candidate’s commitment to preserving American hegemony. Thus, policymakers tended to ignore the public’s views. On Friday, Donald Trump made a solemn pledge that he wouldn’t.

To be sure, Americans are sensitive to the perception of relative decline, strategic weakness, or increased vulnerability to threats. But Trump’s signature slogan is “Make America Great Again.” Not “Make American Hegemony Great Again.” We already have a better sense of what that actually means.

Looking ahead, even those who don’t welcome the end of American hegemony should recognize that they may be powerless to stop that from happening. They were, after all, unable to stop Trump.

That means that we Americans—and the entire world—must get serious about what comes next. If Donald Trump follows through on his inaugural promises, the United States is likely to step back from its role as the world’s umpire. He will focus instead on rebuilding its strength here at home. I believe that we should do that, though I doubt that the president’s protectionist agenda will make America stronger.

But if the Trump administration does change course, away from American hegemony, we should do so in a well thought-out and deliberate way. Rather than merely reacting to presidential pronouncements issued 140 characters at a time, we should move deliberately to construct a new, more resilient international order, one based on timeless principles of self-determination, self-reliance and self-defense, and that is no longer dependent upon the military power of a single nation and its people.