How Trump Can Take on Iran (Without Sparking War) 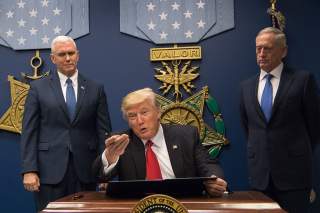 When former National Security Advisor Michael Flynn put Iran on notice last month for its test of a ballistic missile, it was music to the ears of Israeli Prime Minister Bibi Netanyahu.

Even though the Israeli prime minister has, as Martin Indyk put it, lost his “wingman” on Iran (ousted national security advisor Michael Flynn), he still came to the White House this week expecting to solidify the Trump administration’s support for a more hawkish stance toward Tehran. He will leave Washington with an assurance from President Trump to more aggressively challenge Iran’s regional policies. But before the White House translates its rhetoric into reality, it needs to carefully consider the wisdom and practicality of rolling back Iran’s regional influence based first on American, not just Israeli interests, and carefully weigh the benefits of a more confrontational policy toward Iran against the potential costs, risks and consequences. More than likely, a tougher policy against Iranian assertiveness in the region isn’t going to work. Here’s why.

The United States should sanction Iran for testing ballistic missiles in violation of UN Security Council Resolutions, and hold Tehran accountable for strict compliance with its obligations under the nuclear agreement. It should also impose sanctions against Hezbollah to deter and punish its acts of terrorism. But does Washington have the will, the capacity and the allies to effectively challenge and roll back Iran’s regional behavior and influence? Chest thumping might make the Trump administration feel good and look tough, but the options it has to contain, let alone roll back, Iran’s influence are severely limited because of Iran’s superior geographic, demographic and political advantages, and the support of committed and capable local allies.

In Iraq, the United States needs Iran’s cooperation, and the fighting power of the Shia militias it controls, to defeat ISIL. It also needs to work effectively with an Iraqi government that is under Tehran’s sway. The number one priority of U.S. and Iraq military forces is to liberate Mosul from the Islamic State and then prevent it from reconstituting elsewhere in Iraq. The very last thing the United States needs now is a proxy war with Iran it can’t win. It’s no wonder why voices at DOD are cautioning against designating the entire IRGC a terrorist organization—an act that would almost certainly put U.S. forces at greater risk in Iraq (and throughout the region).

In Syria, the United States has lashed itself to a weak and disorganized opposition and is squaring off against an Iran that has more assets and allies on the ground, including militarily capable Shia proxy forces from all over the region and Hezbollah units. It also benefits enormously from Russia’s military presence in the country. More importantly, Syria is vital to Iran’s interests in preserving Alawite rule in Damascus and maintaining a window into Lebanon. As long as the Trump administration continues to give priority to defeating the Islamic State in Syria, believes it can secure Russian cooperation in this fight, and wants to preserve the nuclear agreement with Iran, it will be reluctant to take on Iran in Syria.

And in Yemen, Iran is aligned with rebel Houthi forces. They are tough fighters and benefit from the support of the previous regime. The irresponsible and ineffective Saudi bombing campaign in Yemen has only bolstered their popularity. What exactly is Washington going to do to contain Iran? Increasing U.S. support for the Saudi air campaign will further tarnish America’s already battered image. Backing one Yemeni faction against the Houthis will further enmesh the United States in a messy civil war without having much impact on the ground. Boarding and seizing Iranian naval vessels bound with weapons to Yemen is unlikely to be effective and risks a serious U.S.-Iranian confrontation. The only vital U.S. interest in Yemen is destroying Al Qaeda in the Arabian Peninsula—an interest shared by Iran.

Is it possible that the Trumpians understand these realities? It’s still early, but for all its blustery anti-Iranian rhetoric, the United States’ actions have yet to match its words. After saying during the campaign that he would walk away from the nuclear agreement with Iran, the president has, at least for now, decided to stick with the accord. When Flynn put Iran on notice, he did not say one word about holding Iran to account in Syria for its support of the murderous Assad regime. The administration has yet to aggressively challenge Iranian resupply of the Houthis, while its previous enthusiasm for designating the IRGC as a terrorist organization appears to be waning. Both Secretary of Defense Jim Mattis and CIA director Mike Pompeo see Iran as the most serious threat to U.S. interests in the region. Still, the Trump administration is showing uncharacteristic restraint toward Iran, and Netanyahu hoped to use his meeting with the president to stiffen the White House’s backbone on Iran.

These dynamics can always change, of course, if Iran provokes the administration—for example, by challenging U.S. naval vessels with its fast boats. Getting tough with Tehran without thinking through the consequences of such a policy, and whether it can achieve its objectives without compromising other important U.S. interests and priorities, would be extremely rash and dangerous. And picking fights that cannot be won will undermine American leadership and credibility, not to mention the Trump administration’s reputation for competence, all of which have already taken a beating. Israel may have grandiose ambitions of forming an anti-Iranian axis with moderate Arab states, but Iran is a major power in the region and its influence will be difficult to contain, let alone roll back, at a price that Washington and the American public are prepared to pay.

Instead of uncritically endorsing Israeli interests, a wise and realistic policy would avoid anti-Iranian adventures and focus on containing Iran when its ambitions for regional hegemony threaten vital U.S. interests—defeating ISIL, maintaining access to oil and preventing WMD proliferation—and cooperating with Tehran when it advances those interests, such as countering Sunni jihadi terror, stabilizing Iraq and maintaining the Iranian nuclear accord so long as Tehran stays in compliance. A judicious policy would also avoid getting sucked further into messy regional conflicts, as well as steer clear of actively supporting the agendas of its allies (such as Saudi Arabia in Yemen) when they damage U.S. interests.

Thus, an effective U.S. approach toward Iran will mean defending allies and partners against Iranian attacks, using force to protect freedom of navigation in the Persian Gulf, preventing and responding to Iranian or Iranian-sponsored terrorist attacks against U.S. facilities and personnel, and using force to prevent Tehran from breaking out of the nuclear agreement in violation of its commitments.

Perhaps more importantly, the Trump administration needs to think hard about what it wants to achieve in the region and the point of toughening U.S. policy toward Iran. What’s the endgame in the face of a regime that isn’t going to change its repressive policies at home or roll back its efforts to maintain its regional influence? Is it to provoke Iran into a wider conflict so that the administration can take off the gloves? Or to moderate Iranian behavior in the region outside the four corners of the nuclear agreement? Perhaps it’s to improve America’s leverage so that it can renegotiate better terms on the nuclear agreement.

Unless the administration has a clear end state in its sights and a viable road map for getting there, it will find itself on the short end of the stick in confronting Iran when vital American interests are not at stake and taking on Tehran will only make the situation worse.

Aaron David Miller is a vice president and distinguished scholar at the Woodrow Wilson International Center for Scholars and author of The End of Greatness: Why America Can’t Have (and Doesn’t Want) Another Great President. Richard Sokolsky is a senior fellow at the Carnegie Endowment for International Peace and a former member of the secretary of state’s policy planning staff.