How Trump Can Unite the GOP 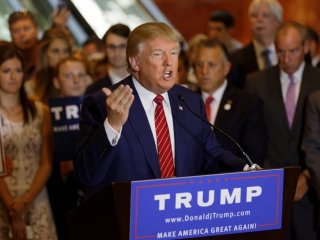 When the Republican front-runner first emerged Tuesday night to declare victory, we saw a restrained, gracious and even presidential Donald Trump.

Trump praised House Speaker Paul Ryan, who has done everything in his power to undermine the billionaire. He urged Republicans to unify around his candidacy. In exchange, he promised to deliver the GOP the White House.

When the crowd started to boo a reference to Mitt Romney, Trump quieted them. He said that Romney, who rewarded Trump’s 2012 endorsement with a virtually unprecedented anti-Trump speech last week, was a “nice man.”

Trump even said that persistent critic Lindsey Graham, the senator from South Carolina, was probably a nice man, though he did characterize Graham’s frequent televised attacks on his candidacy as “nasty.”

The man who won Michigan, Mississippi and Hawaii while finishing second in Idaho shoved aside his initial conciliatory rhetoric and blasted his primary opponents. He stopped short of calling for “Little Marco” Rubio to drop out, but vowed to beat him in Florida. Trump also went after “Lyin’ Ted” Cruz, the only Republican who has been able to compete with him in the primaries so far.

Trump faces a real dilemma. He keeps getting closer to winning the Republican presidential nomination, but the party’s elected officials are reluctant to coalesce around him and embrace him as the front-runner he is. Large swathes of both the Republican establishment and the conservative movement despise him. They at least talk about refusing to support him under any conceivable set of circumstances.

When Trump talks about the need to unite, when he gives press conferences in front of American flags rather than holding rallies, when he mentions the Supreme Court and letting down Antonin Scalia by allowing Hillary Clinton to pick the conservative jurist’s replacement, he is demonstrating a clear understanding that this is a problem.

Even if Trump can continue to win Republican primaries with so much of the party arrayed against him, he will need the party apparatus behind him to beat the Democrats in the fall. He says he can be more presidential than anyone besides “Honest Abe” Lincoln. Can he?

If Trump begins to behave like a conventional politician, he could alienate some of his hardcore supporters who love that he is politically incorrect and treats the process like a joke. If he tries to behave himself in Thursday night’s debate, he risks abandoning his status as the “big man” on stage and the formula that has gotten him this far.

Yet if Trump doesn’t extend more of an olive branch to his foes, he will never bring the Republican Party together enough to win in November. Bernie Sanders’s upset victory over Hillary Clinton in Michigan not only reminded us that the Democratic front-runner has vulnerabilities; she has vulnerabilities that Trump is well positioned to exploit (indeed, better positioned than any of the other surviving Republican candidates).

Trump is already going to have to try to beat Clinton with a more hostile conservative press than any Republican presidential candidate has faced since before Ronald Reagan was elected president and with more GOP elected officials defecting than at any time since Barry Goldwater’s landslide loss in 1964. Even if he brings in blue-collar Democrats and independents, he has to minimize these defections to have a chance.

Against Cruz, Trump has the opportunity to present himself to the Republican establishment as the more plausible general election candidate. All he has to do is beat Rubio in Florida and John Kasich in Ohio.

But Trump has done himself no favors by behaving in a more outlandish fashion since he began winning, as if he is trying to test how far he can go. Some Republican leaders seemed willing to at least entertain backing Trump over Cruz. Now that trend has been arrested or even reversed.

Tuesday leaves Trump in control of his political destiny. The question is: can he control himself?