How Trump Could Win the North Korea Nuclear Game 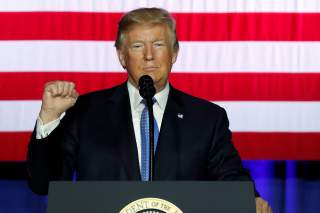 Verbal fisticuffs and military operations above the Northern Limit Line and close to North Korea’s border is where the United States finds itself today in its long standing feud with Pyongyang. When Kim Jong-un is not calling the American president a “dotard,” his foreign minister is threatening a possible explosion of a thermal nuclear device over the Pacific Ocean. Both sides have their hackles up and for the first time in a long time, analysts of the region seriously wonder whether the escalating crisis could stumble into conflict. The world watches in befuddlement and asks is there any way out of this game of chicken.

At the core of the matter lies the question: Can North Korea and the United States find an off-ramp from the escalatory ladder that both are currently climbing? The answer is “maybe,” but the window is rapidly closing if it hasn’t already closed. The maximum-pressure campaign, which relies on sanctions, will not work in time to prevent North Korea from acquiring a viable nuclear weapon with the ability to strike the continental United States. Continued reliance on this strategy is a waste of time as America waits for the inevitable. The vaunted military option, no matter how surgical or well meaning, most likely ends in disaster for Seoul (where over one hundred thousand Americans live) and will weaken of the U.S. strategic position in Asia.

So what is to be done? First, understand that U.S. policy toward North Korea and denuclearization is fundamentally flawed. It treats diplomacy as a zero-sum game and fails to recognize that diplomacy is the art of the possible, not the art of the perfect.

Figuring out the art of the possible begins not with U.S. goals and objectives (those are known), but with understanding Pyongyang, and more importantly, Kim Jong-un’s perspective. For Kim Jong-un, the nuclear program is viewed in existential terms. Unlike his father, Kim believes that the time has passed when the program could be used as a bargaining chip. In the post–Muammar el-Qaddafi and –Saddam Hussein world, the United States can no longer be trusted not to entertain the idea of regime change if given half a chance. Promises today can fall by the wayside tomorrow. Only by holding the United States hostage can Kim breathe easily.

But, can Kim and the North Korean leadership be persuaded to stop short of fielding its viable nuclear deterrent? This is where the maybe comes in. It depends on how close North Korea is to securing a nuclear capability that can strike the United States. This takes several steps, some of which North Korea has mastered and some that it has not. At some point, a threshold will be passed that will shut the door and a freeze will be off the table. If we are not at that point, then Kim might be open to talks provided it satisfies his equities.

The trick becomes how to change Kim’s calculus while respecting his two centers of gravity (survival of the regime under Kim family rule). This only becomes possible if we look at denuclearization in a different way. Instead of denuclearization being the opening gambit to diplomacy, it needs to be viewed as the ultimate objective. By not putting the cart before the horse, we can employ a balanced pressure/diplomatic strategy that might allow Kim to rethink the need to speed toward a resolution on the nuclear program. Instead, he might be willing to live with a turnkey program, which can always be resurrected if the terms of the deal are violated. In addition, economic and security incentives would likely be required to seal the deal. Future rollbacks of the sanctions regime can be considered in order to reward Pyongyang and keep it invested in maintaining its promises—no more testing, no proliferation, and ceasing its brinksmanship strategy. Sometime in the future, when leverage and trust have been established in the U.S.-North Korean relationship, we can revisit the issue of dismantling the nuclear program.

Can such a deal be reached in the current high-stakes environment? It is hard to tell. Providing economic and security incentives while leaving North Korea’s nuclear program in place will be a hard pill for U.S. policymakers to swallow. It smacks of rewarding bad behavior and it will not go down well with many Americans who feel comfortable in demonizing adversaries that have engaged in the despicable behavior that North Korea has exhibited for decades. No succor should be given to a regime that returns a poor student to his family in a coma for pulling a propaganda poster off a wall.

But demonizing a country, no matter how reprehensible its regime may be, takes options off of the table. As time goes by and engagement dries up, dangerous dynamics may fill the policy vacuum, and the public could begin to contemplate the unacceptable because it knows no other way out of a situation that is becoming less and less tolerable. That noise might begin to crowd out everything except the most dire and immediate of solutions. At that point, a cool, rational leader would need to take a step back.

President Trump, instead of throwing diplomacy under the bus, can go a long way to solving this most intractable problem by taking a few well-chosen steps. First, drop the mad-man strategy. It may be fooling the North Koreans, but not in a good way. Kim and his advisors don’t know how to interpret the various messages coming from the White House, State Department and Pentagon. This creates the very real possibility of misperception, especially with U.S. aircraft flying above the Northern Limit Line. Second, the administration should look to pass messages, in both the unofficial and official meetings it is having with North Korean interlocutors, to float the idea of broadening the diplomatic aperture to see if a freeze is even possible. Finally, walk back the rhetoric. President Trump should use his bully pulpit to not only calm the adversary, but take an important step in preparing the American public for a new path forward. One that has a more constructive endgame than the one we have currently deeded to ourselves.

Ken Gause is the director of the International Affairs Group, which is a part of CNA’s Center for Strategic Studies. He is a senior foreign leadership analyst, an expert on North Korea and he has written three books on North Korean leadership. His latest book is North Korean House of Cards: Leadership Dynamics Under Kim Jong-un.