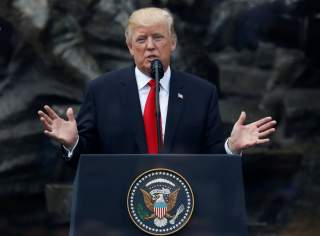 When German chancellor Willy Brandt fell to his knees in front of the monument to the Warsaw Ghetto Uprising during his 1970 visit to the Polish capital, Władysław Gomułka, the first secretary of Poland’s Communist Party, is said to have hissed, “Wrong monument!” In Gomułka’s view, if Brandt had to kneel, he should have done so at the Tomb of the Unknown Soldier, commemorating Polish servicemen who died in World War II. After all, Brandt had come here to put an end to German-Polish border disputes—a bitter echo of World War II—once and for all.

Last week, another national leader’s visit to Warsaw provoked an outcry over a “wrong monument.” This time, the leader was U.S. president Donald Trump. Trump chose to deliver his high-profile speech in front of the monument to 1944’s Warsaw Uprising, ignoring the ghetto monument altogether—the first American president to do so since 1989.

The context and mission of each high-level visit to the “wrong” monument was very different. And yet, one of the core issues underlying the heated public debate that ensued in both cases remains the same: memory of World War II and the politics of history.

Memory wars are raging in today’s Poland, causing acrimony in both domestic and foreign affairs. The historical narrative that Poland has chosen since the fall of communism holds that the country was a double victim of Nazi and Soviet aggression. The same narrative has been adopted by much of postcommunist eastern Europe. This is precisely the narrative that President Trump affirmed in his speech, as he praised Poland for standing up to this double menace.

This narrative, however, is highly dubious. For one thing, it paints over the Poles’ role as willing participants in the atrocities perpetrated by the Nazi regime. According to historian Jan Grabowski, some two hundred thousand Polish Jews were killed by Poles, directly or indirectly, during the war. Yet in Poland, that is a taboo subject. There is now a law on the books prohibiting the suggestion that Poles bear responsibility for the murder of the Jews.

A deeper problem with this narrative is that it equalizes the Soviet and Nazi regimes. Dr. Efraim Zuroff, who heads Israel’s Simon Wiesenthal Center, rejects this “false symmetry” based on three criteria he applies to totalitarian regimes: “intention (ideology), implementation and implications.”

“The major differences between Nazism and Communism,” he wrote to me, “are the fanatic determination of the former to totally wipe a people—the Jews—off the face of the earth (intention/ideology) and the use of industrialized mass murder, hitherto unprecedented in human history, to implement their goal.”

Yet double victimhood equalizing the two regimes has become the dominant narrative throughout the region. The results have been disconcerting.

In 2015, Ukraine followed the advice of its Institute for National Remembrance and introduced laws criminalizing the “desecration of memory” of UPA and OUN fighters—members of its wartime nationalist movements. The two organizations embraced Nazi ideology. Some of its leaders and rank members served in German auxiliary police and massacred Jews and Poles in the name of an ethnically pure Ukraine. Today the country is busy turning them into heroes.

Hungary recently came under fire from the U.S. Holocaust Memorial Museum and Israeli government, following a speech by prime minister Viktor Orbán praising the Hungarian anti-Semitic wartime leader Miklos Horthy, implicated in the annihilation of Hungarian Jews. And Lithuania is just now waking up to the historical truth of its role in the Holocaust, thanks to a book that Ruta Vanagaite, a Lithuanian author, cowrote with Zuroff. The book disclosed how Lithuanians (including Vanagaite’s own family) murdered the country’s two hundred thousand Jews.

Trump’s speechwriters likely knew none of this context when they decided to build his speech around Poland’s story of double victimhood. This, on the one hand, points to the ongoing problem of this White House choosing to fly solo in diplomatic forays into complicated parts of the world. The State Department’s former special envoy for monitoring and combating anti-Semitism told Haaretz that this region’s historical memory politics was a central issue for his team during his last year in office. Yet his position at the State Department remains unfilled, suggesting that more blunders of this kind are likely in the making. But something else is at play here, too.

In 1970, Brandt chose to make his historic gesture in front of a monument that ostensibly didn’t suit the purpose of his visit. Bartosz Rydlinski, a Warsaw-based reconciliation expert, told me that Brandt picked that site because he “knew that the Holocaust as a symbol was much more universal. He also knew that most people who had been killed in the Holocaust were of Polish origin, and yet many Jews from other European countries had also been killed.” This made the gesture more all-encompassing, enabling Brandt to rise above political agendas of the moment.

In contrast, Trump chose a monument that fit his storyline, but ended up endorsing a version of history that is divisive, exclusionary, revisionist and highly politicized—exactly the opposite of what this long-suffering region needs as it still tries to heal its wounds.

The sad truth is that this approach to the politics of memory has already proven detrimental to the very countries that espouse it. Hungary is the target of international pressure and condemnation. Poland is becoming increasingly isolated. Ukraine has seen its relations with Poland deteriorate, as Warsaw demands that it recognize the Volyn massacre, perpetrated by the UPA and OUN, as genocide. Ukraine’s memory policies have also given an extra reason for Poles to deny opportunities to Ukrainians seeking jobs in Poland.

In a recent article about Ukraine’s struggle with the past, a group of distinguished historians of the region wrote: “The attempt to shape memory with a nationalist bias risks reproducing some of the stifling conformity and divisive manipulation of communist authoritarianism.” This applies to the broader postcommunist region. It is unfortunate that in affirming Poland’s version of history, President Trump has taken postcommunist eastern Europe one step further in that direction.

Izabella Tabarovsky is Senior Program Associate and Manager for Regional Engagement with the Kennan Institute. From 2012 to 2014, she worked for the Carnegie Endowment for International Peace, where she led the implementation of the Euro-Atlantic Security–Next Generation initiative.