How Trump Misunderstands the Middle East 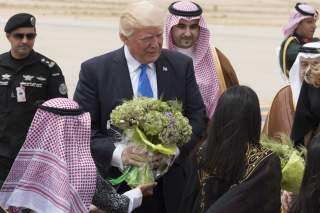 President Trump’s comments during his recent visit to Saudi Arabia demonstrate his administration’s total lack of understanding of Middle Eastern realities. Trump and his team are so obsessed with undoing President Obama’s legacies in the Middle East that they have created a false image of the situation in the region, one that is dictated by their preferred views but that does not correspond to the reality on the ground. This distortion was clearly evident in President Trump’s proclamations regarding terrorism, Islamist extremism and Iran, and his cozying up to some of the worst violators of human rights in the region, such as President Sisi of Egypt, including publicly admiring the Egyptian leader’s shoes.

The atmospherics during President Trump’s visit to Riyadh, where he met not only with Saudi royalty and the absolute rulers of the GCC countries, but with dozens of leaders from across the Muslim world, was in stark contrast to the last meeting between President Obama and the Saudi king, which was a stiff encounter both because of Obama’s interest in striking a nuclear deal with Iran and his concern about human-rights violations by Middle Eastern rulers. What Trump told the Saudis in bilateral conversations, and his public speech before the gathered Muslim leaders, were music to Saudi ears.

The two themes that stood out in Trump’s pronouncements in Riyadh were, first, his exhortation to the assembled Muslim leaders to join the United States in what he described as “a battle between good and evil” and, second, his castigation of Iran as the primary source of terrorism and the main destabilizer of the Middle East. On the first issue, he made it clear that the United States and the rulers of Saudi Arabia and their allies were on the same side in the war against terrorism.

This statement, to say the least, defies common sense. For it is clear that the terrorists who owe allegiance either to Islamic State, to Al Qaeda, or to their many offshoots are ideological cousins of the Wahhabis who rule Saudi Arabia. Karen Armstrong has stated, “although IS is certainly an Islamic movement, it is neither typical nor mired in the distant past, because its roots are in Wahhabism, a form of Islam practised in Saudi Arabia that developed only in the 18th century.” She goes on to assert that while the grand mufti of Saudi Arabia has condemned ISIS strongly, “other members of the Saudi ruling class . . . look more kindly on the movement, applauding its staunch opposition to Shiaism and for its Salafi piety, its adherence to the original practices of Islam.”

This inconsistency in the Saudi approach is explained by the fact that the Islamic State considers the House of Saud insufficiently Islamic. It is the latest product of the trend first visible in Wahhabism in 1979, when a group of radical Wahhabis seized the Grand Mosque in Mecca to demonstrate their opposition to the Saudi establishment for its departure from the strict Wahhabi code. In other words, ISIS is a manifestation of Wahhabism from below that has become a deadly enemy of the Wahhabism above.

However, this has not deterred rich individuals from Saudi Arabia and other Gulf sheikhdoms from contributing financially to the cause of radical extremism in Syria and elsewhere. It is difficult to believe that Gulf regimes, including the Saudis, that excel in controlling their populations are unaware of these financial transactions. But since much of this funding is aimed at countering Iranian influence, especially in Syria, they turn a blind eye. The Saudis have often been accused of funding extremist Sunni preachers and mosques in Europe and elsewhere who often act as conduits for jihadi ideology. However, given Riyadh’s clout with leading Western powers, the evidence of such activity has rarely been made public.

It appears that President Trump’s unequivocal embrace of Saudi Arabia has had a negative impact on intra-GCC relations. It has emboldened Riyadh to attempt to stamp out any dissent among GCC countries and turn the entire region into a Saudi protectorate. Qatar has become the first to feel the heat. Within ten days of Trump’s visit to Saudi Arabia, Bahrain, UAE, Egypt and Yemen cut off all diplomatic, trade and transport ties with Qatar, citing the latter’s support for “terrorism”—the code word for the Muslim Brotherhood, which has been banned in these countries since the overthrow of Mohamed Morsi in 2013. They also cited Qatar’s friendship with Iran, Saudi Arabia’s regional competitor, with which Qatar shares the world’s largest natural-gas field in the Persian Gulf. President Trump, in two tweets on Monday, endorsed the actions against Qatar. In the second tweet he declared, “So good to see the Saudi Arabia visit with the King and 50 countries already paying off. They said they would take a hard line on funding extremism, and all reference was pointing to Qatar. Perhaps this will be the beginning of the end to the horror of terrorism!”

The president’s statement ignored the fact that this rift could create major problems for American force-projection capabilities in the Persian Gulf, aimed primarily at countering Iranian influence. Qatar hosts the largest American air base in the region, as well as the forward headquarters of U.S. Central Command. Bahrain is the headquarters for the U.S. Fifth Fleet, and Saudi Arabia hosts five American air bases. The intra-GCC split, if it continues, could create serious command-and-control issues for the U.S. military in the region.

However, in the final analysis, as the Qatar crisis demonstrates, the problems within the GCC boil down to its members’ approach toward Iran, the largest and potentially the preeminent power in the Gulf. Saudi Arabia, supported by the UAE and Bahrain, has adopted an uncompromisingly hostile posture toward Iran—but Qatar, Oman and, to a lesser extent, Kuwait have advocated a more nuanced approach, accommodative of Iranian interests in the region. President Trump’s hard-line attitude toward Iran during his visit to Riyadh has emboldened the Saudis to take matters into their own hands, and whip the others into line.

The problem with this approach is that Iran cannot be wished away, and no stable structure of security in the Persian Gulf can be constructed without its participation. Pouring hundreds of billions of dollars of sophisticated weapons into the Saudi armory will not be able to neutralize Iran’s natural superiority in terms of size, demography, resources, technological capacity and an educated population. Moreover, Iran’s soft power has of late been on the increase in the region, despite the mullahs’ hold on many levers of power in the country, thanks to the policies of domestic and international openness adopted by President Rouhani.

Rouhani’s landslide victory last month over a candidate surreptitiously supported by the supreme leader has demonstrated the sophistication and confidence of the Iranian electorate. Its acceptance by the clerical establishment is not only evidence of the latter’s political sagacity, but it also makes clear that, unlike in its Arab neighbors, public opinion counts in Iran and the reformist trend is once again on the ascendancy. One cannot rule out the fact that Ayatollah Khamenei’s death (he is seventy-eight and reportedly not in good health) could lead to a radical shift in the balance between the elected representatives of the people and the aging mullahs desperately trying to hang on to power.

President Trump’s anti-Iranian proclamations in this context defy understanding, coming as they did within days of Rouhani’s victory and his recommitment to the nuclear deal. Among other things, they could undermine the pro-democracy movement in Iran. Moreover, his characterization of Iran as the main font of terrorism in the Middle East flies in the face of facts. The terrorist attacks on Wednesday on Iran’s parliament and at the tomb of Ayatollah Khomeini, claimed by ISIS but blamed by Iran on Saudi Arabia, is clear evidence of the fact that the United States, Europe and Iran are facing a common enemy. Therefore, they need to coordinate their efforts to neutralize ISIS and its backers rather than engage in mutual recrimination.

As stated earlier, ISIS, Al Qaeda and their offshoots are products of the Sunni jihadist ideology that originated in Saudi Arabia, and are mortal enemies of Shia Iran. In fact, Iran and the United States are engaged in a common struggle in Iraq against ISIS. While they differ in their approach to Assad in Syria, Iran, in contrast to Saudi Arabia and Turkey, has never been accused of supporting ISIS or other Islamist extremist groups in Syria. Despite the rhetoric surrounding it, Iran’s opposition to some of America’s Middle Eastern policies are based on geostrategic and not ideological considerations. However, geostrategic differences can be resolved by negotiation (witness the Iran nuclear deal), while ideological contradictions—as between the Sunni jihadists and the West—turn into zero-sum games.

Consequently, President Trump’s harsh indictment of Iran while Tehran’s streets were still full of people celebrating Rouhani’s victory over his hard-line rival made little geostrategic sense. It can be explained in large part on the basis of his dislike of any policy bearing Obama’s stamp, even if it was a triumph of diplomacy that prevented a major regional conflagration. The only other explanation for Trump’s behavior, and one not befitting the president of the greatest power in the world, is that he wanted to ingratiate himself with the Saudi ruling house without a full understanding of Saudi ideology or its geopolitical motives. This, as the recent Qatar crisis has demonstrated, is already turning out to be counterproductive.