How a Trump Presidency Will Help U.S. Diplomacy 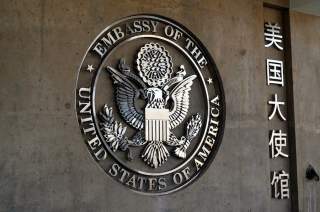 Congratulations! You’re a State Department political officer with a new assignment. “Hopefulstan” has a history of corruption, but its citizens are eager to democratize, and you have the tools that American foreign service officers have always been able to rely on: a persuasive lecture about the importance of the rule of law, and equally persuasive warnings about how official corruption damages both civil society and foreign investment.

On top of all that, you have the prestige that comes with representing the United States of America, which is known and admired worldwide for advocating those values.

After only a week at your new post, however, you find things are worse than you thought. Hopefulstan’s corruption is widespread at high levels.

• The new president and her family have been operating a “charitable foundation” that for years solicited millions of dollars from foreign governments and big domestic and foreign corporations, and now no one knows to whom she may owe favors;

• Since Hopefulstan is not a major power, its military and intelligence officials need good relations with the United States, and want to show they can be a trusted ally. But then you find out that the new president, before she took office, routinely had classified information sent to her home, and even let her housekeeper access it, which were clear violations of the country’s national security laws.

• Even worse, the head of the national police agency refused for years to investigate her, and then, when he finally did (just before you arrived), he announced that even though her actions violated the law, he would recommend against prosecution.

There were also other troubling signs. When the previous ruler made comments indicating that he no longer considered himself the president of all the people, but of just his supporters, Hopefulstan’s tax agency began harassing and penalizing political opponents of the government. The more you looked, the more you realized that some of the government’s most important agencies, including those responsible for law enforcement, foreign affairs and taxation, were being used for political purposes to reward friends and punish enemies, rather than to serve all citizens fairly.

Clearly Hopefulstan is no paragon of democracy.

The scenario above is not unusual. Countries that aspire to be democracies often have problems with corruption and enforcing the rule of law, which is why the United States—because of our reputation for standing up for the rule of law and against corruption—is so important. That reputation has allowed our diplomats to point to our own democracy, and history, to show how we have dealt with problems such as the Watergate and Abu Ghraib scandals, business scandals like Enron, and political corruption by politicians like Richard Nixon and governors Rod Blagojevich and Eliot Spitzer.

What would have happened if we had elected as president a person who most foreigners would consider both corrupt, because of the obvious conflicts created by the Clinton Foundation, and a proven liar, because of her public statements about how she handled classified government email? What would that have done to our credibility? Would American officials have any moral authority to lecture to anyone ever again about the importance of the rule of law, and the moral and political cost of official corruption?

There have been a lot of commentaries, written both before and after the election, about how hard it will be for U.S. diplomats to explain Donald Trump to the rest of the world. In fact, I think they’ll find that Trump will not only be much easier to explain than a Hillary Clinton victory would have been, but that his story will make an excellent talking point for how a free democratic system works.

Democracy is not always predictable. (Just ask the Brits about Brexit, and the French, Italians, Germans and Poles, to name a few restive electorates in Europe, about their own past or upcoming elections.) No one thought Donald Trump would win. His candidacy wasn't cooked up by party powers in a back room. He was a person with no prior political experience who decided to run for the highest office in America, in defiance of those party powers—and he won.

Whether you support Donald Trump or not, you have to be impressed by a country where that can happen, and you can be sure that, far from the melodrama and hand-wringing among some people in the United States, there are many more people around the world who look at our election and are amazed once again at America and what she is capable of.

No one wanted Donald Trump to be president, but the people who voted for him. And they were enough.

David S. Jackson is a former director of the Voice of America who later worked in the State and Defense departments. Before joining the government, he was a Time magazine correspondent in the United States and overseas for 23 years. He is currently living in Prague.